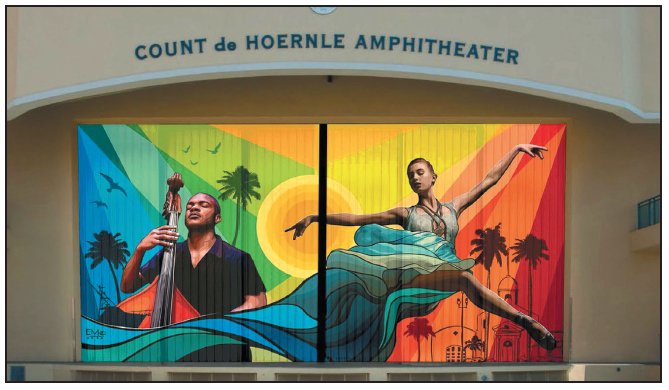 The winning proposal for the Mizner Park Amphitheater stage door mural depicts a musician on cello and a dancer. Boca Raton City Council members selected the work by artist Eduardo Mendieta from 29 submissions. Rendering provided by City of Boca Raton

The Mizner Park Amphitheater stage doors soon will feature a large mural intended to be a focal point for downtown visitors.
West Palm Beach artist Eduardo Mendieta’s mural, titled “On Stage” and featuring a musician and a dancer, was selected by City Council members on Dec. 8 from 29 submissions.
The stage doors, consisting of six panels, are about 30 feet high and 60 feet wide. After reviewing the submissions, council members quickly settled on two finalists before unanimously selecting Mendieta’s mural.
“It is a compelling piece of art,” said Deputy Mayor Andrea O’Rourke.
Council members thanked all the artists who submitted entries. “We appreciated your creativity, your vision and your desire to participate,” said Mayor Scott Singer.
Mendieta will get a stipend for expenses such as supplies, preparation and installation. The mural is expected to be completed by March 31.
The stage doors project is the latest effort by the city to feature art in public places, an initiative championed by O’Rourke.
Past projects by Mendieta, a well-known Florida artist, have included murals in West Palm Beach, Lake Worth Beach, Delray Beach, Riviera Beach, Hallandale Beach, Ocala and Bradenton as well as in other states.