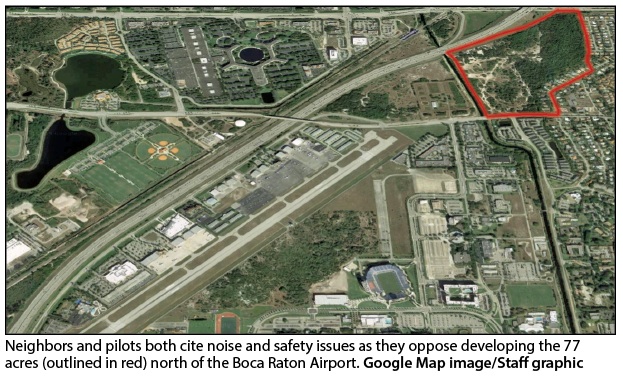 A redrawn blueprint for development of one of Boca Raton’s largest remaining parcels of undeveloped property got the green light to move forward from the City Council despite concerns from members of the Boca Raton Airport Authority.
During a lengthy meeting last month, crowded by neighbors wearing red shirts to show their opposition to the property owner’s proposed master plan, the City Council voted with little comment to rezone the property and allow more intense usages for the University Village mixed-use project. The council did impose several conditions including an increase in buffer zones, the addition of open space and limiting emergency access.
Development of the parcel had been approved in 2013 but that approval allowed for significantly less square footage of usage.
Under the proposed planned mobility master plan, the 77-acre parcel — just north of the Boca Raton Airport and just east of Interstate 95 — could eventually include as many as 829 residential units as well as retail, office space and a hotel.
While the two dozen residents who spoke before the council objected primarily to traffic and voiced concerns about impact on neighboring homes, members of the Boca Raton Airport Authority — in an earlier meeting — said they worried about the safety of pilots and residents.
“I’m very opposed to it,” said board member Bill Schwartz, a pilot, during the airport authority’s November meeting. “Never mind just the pilot and his passengers but the people living in those buildings — they’re a target potentially.”
The airport authority did not vote or offer a formal recommendation, but it did send Executive Director Clara Bennett to the City Council meeting where she summarized authority member’s concerns.
Bennett pointed out that the project was directly in line with the extended runway center line and would be subject to low altitude overflights and noise from departing and arriving aircraft.
“The residents will be living with noise issues once they move in,” she said. Bennett also addressed concerns with the 85-foot maximum building height allowed.
Authority member Jack Fox, also a pilot, said he would expect to receive noise complaints.
“We have corporate jet aircraft that generate a lot of noise particularly on takeoff and that’s going to generate a lot of comments from those who live there,” Fox said.
To that point, representatives of the developer — Penn-Florida — said they would ensure that tenants moving into the development were made aware that they were under a flight path and could be subjected to aircraft noise.
While noise was one concern expressed by airport authority members, it was worries about safety that drew the most attention.
Representing the developer, attorney Charles Siemon told the authority proposed heights appear to be in accordance with FAA requirements. He also said the federal agency would have the opportunity to weigh in on each of the site plans that must be submitted prior to development of parcels within the project.
Airport authority members, however, still expressed concerns. “Currently, if an aircraft is taking off to the northeast and he’s 300 or 400 feet and he loses an engine, he has no place to go but to land straight ahead,” Fox said. “When that’s built up with 1,500 people that’s where he’ll land.”
Attorney Mitch Kirschner, who also represents the developer, said that while there have been two incidents of planes crashing on takeoff or landing in the Boca Raton Airport area since 1985, neither occurred on the property that will be developed.
“We can appreciate the concern, but it appears to be unfounded based on the history of the parcel,” he said.
In his comments, however, Fox expressed a deep concern for future residents of the project. “When this is built, it will present a very meaningful danger to anyone who lives in that area,” he said.