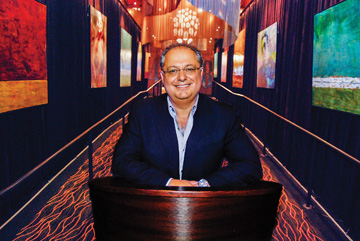 Long ago and far, far away, Hamid Hashemi couldn’t get enough of movies. His mother would take him and his brother and sister to the local cinema in Tehran, Iran, every Friday. The big screen became so alluring that he and his teenage pals once saw 19 movies in two weeks.

“Movies were the gateway to the Western world,” Hashemi said. “They opened up my universe.”

Still a teenager, Hashemi and his family left Iran in 1978, a year before the revolution. Six years later, he was running his own movie house, three screens in a Coral Springs strip mall. He called his company Muvico. It became an industry innovator.

Fast forward to the 21st century. Just as movie-making has changed, so has the movie house. No more strip malls, no more floors gooey with popcorn ground into spilled soda, no more scratchy film. In 2005, Hashemi and Muvico parted. Two years later, in a Milwaukee suburb, he opened his first iPic theater. The plush leather seats of iPic Theater’s Premiere Plus seating
include a pillow, blanket and popcorn. Grand opening is May 4
at Mizner Park in Boca Raton. Photos by Kurtis Boggs/The Coastal Star

On May 4, his newest and most advanced iPic opened in Boca’s Mizner Park.

At first sight, it suggests luxury hotel, a hot bar, a top-end restaurant or perhaps a lounge designed by Tim Burton. That’s the point.

“Movies are about escapism. When you went to Radio City Music Hall, it was to escape,”  said Jim Lee, iPic vice president of marketing.

That lounge? Appropriately named The Cocoon, it’s encased  by a thicket of  leafless vines — actually centuries-old wood from Malaysia.

Anyone, not just moviegoers, may dine at Tanzy, the 250-seat restaurant and bar (opening May 14).

It offers indoor and outdoor dining, an “artisanal Italian menu” fresh made from local sources, plus a novel Italian take on a sushi bar.

Even the restrooms are stunning. Sinks made of hollowed and polished boulders sit atop countertops of translucent stone that are lit from below. The walls are covered by glass tiles and panels of interwoven coconut shells. 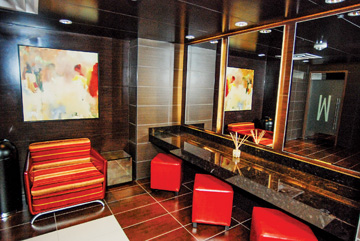 Luxury materials are used throughout the iPic Theater,
including this upstairs women’s restroom.

Take the escalator to the theater level, where an attendant takes your ticket and an usher escorts you to one of the eight theaters. The smallest seats 44, the largest only 82.

Now on to your theater. Though each auditorium has less capacity than its predecessors, it’s wider and seats are arrayed stadium style to enhance the wide screens, digital sound and the booming 3-D experience.

All seats are reserved, and guests are encouraged to select online in advance. Seats can be removed to accommodate patrons in wheelchairs.

All seats are thickly cushioned leather with wide arms and trays that can accommodate food and drink.

For a surcharge, guests can choose Premiere Plus (popcorn included) — a fully reclining seat, with a pillow and blanket. Snuggling is tight but possible. Press a call button on the inside of the arm, and a “ninja server” appears to take your order.

“This idea goes back to 2004, 2005,” Hashemi said, referring to Muvico’s Premiere concept. “This is really an evolution of that. Over time, we’ve done a number of ’em, and every time we’ve done it better.”

Each is styled for location

In the old days, a typical theater might employ a ticket seller, a ticket taker, a concessionaire, a couple of ushers and a projectionist. iPic’s theater and restaurants require a staff of 246. Ticket prices start at $14, but membership plans offer discounted pricing, advanced access to blockbuster films, free tickets on birthdays and other specials.

iPic runs nine complexes in seven states, and the next will open this winter at Gulfstream Park in Hallandale. Each is styled for the community. Milwaukee includes a bowling alley and a Friday night fish fry.

Hashemi is still in love with movies. His favorite remains Raiders of the Lost Ark, and “any movie that makes money.” And iPac’s business, he said, has exceeded expectations. Still, in the end, he has only one question: Will they come back?

“The service has to top what you’re looking at,” he said. “After a while, you’ve seen all this and it’s the service that will bring you back. We want this to be your home away from
home.”