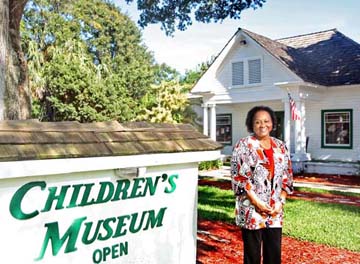 is leading a series of initiatives to bring more money into the museum.

After 34 years of financial insecurity, the Boca Raton Children’s Museum hopes a trio of fundraising efforts will nudge it into the black.

The museum’s board of trustees decided at a “sustainability planning retreat” to sign on with Internet startup Rewards for Causes and a similar Internet concern, Round It Up America, to boost their donor base. A month earlier, Denise St. Patrick-Bell, the museum’s executive director, hired a philanthropy adviser to hunt down large endowments.

“We’re trying all kinds of different ways. It’s not our product, it’s our lack of visibility,” Patrick-Bell said.

Rewards for Causes is like the Internet deals that Groupon offers, but with a portion going to a specific charity, founder Nicholas Brusca said. But, he added, Internet deals can backfire and make customers think something must be wrong with the business.

“We’re really trying to build up the business and the charity,” Brusca said.

His website will create profile pages for both parties to maximize exposure. The business will get 50 percent of the revenue and the charity will get 30 percent, leaving him with 20 percent for setting up the deal.

The Yard House restaurant in Mizner Park is already a partner in Round It Up. Patrons who sign on have their dining bills rounded to the next dollar, with the extra change going to the charity of their choice.

A handful of change on dozens of restaurant bills can add up quickly, said Jon Sahn, the philanthropist hunter who recommended Round It Up to the board.

“No matter how many dollars it is, it’s better than zero dollars,” Sahn said.

Sahn, a chartered adviser in philanthropy, said the Children’s Museum must have successful fundraising campaigns and show it has an impact before he can woo wealthy donors to come aboard. The museum’s signature event, Breakfast With Santa, is Dec. 7 and features 40 tons of snow.

“We need to museum to be the go-to place for kids,” Sahn said.

Patrick-Bell played an online TED lecture for the trustees at the Nov. 9 retreat bemoaning the fact that few donors want a charity to spend their gifts on advertising.

“I don’t mind giving money for advertising,” Penny Morey, president of the nonprofit museum’s board, said. “We’re business people. We know you have to spend that.”

Patrick-Bell, who took over as executive director in May 2012, said she has increased revenues from admissions by 74 percent, added 79 families as members, recruited 32 new volunteers and participated in 15 community outreach events and six special events for groups of more than 2,000 people. She also made her part-time education director a full-time employee.

Patrick-Bell also is excited that this year’s Leadership Boca class chose to raise money to buy the museum a vehicle to retrofit into a psychedelic “art bus” to take educational programs out into the community.

While admission fees are up, they provide only 27 percent of the museum’s $300,000 operating budget, Patrick-Bell said.

The museum’s goal is to expose young children to history, sciences, art and the humanities. It leases 0.8 acres at 498 Crawford Blvd. from the city for $1 a year. Two of its three buildings were donated.

It has been on increasingly shaky financial ground for some time. In June the museum received an emergency $127,000 grant from Boca Raton to help it survive until October, when it was counting on an annual $23,400 award from the City Council.

The museum received a $75,000 bailout grant from the city, also for operating expenses in March 2012.

“Will we need this again next year? Probably,” Patrick-Bell said. “Does that mean we’re a failure? No, it does not.”