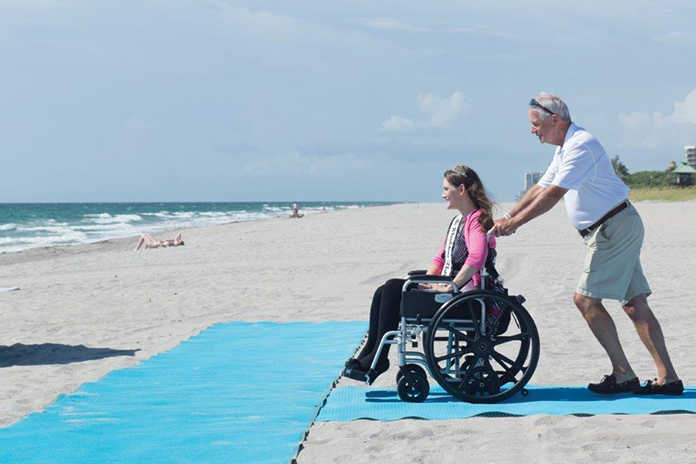 along one of the city’s mobility mats at Spanish River Park.

For Heather Taylor, a visit to the beach at Boca Raton’s Spanish River Park was about something bigger. To Taylor, who is Ms. Wheelchair Florida 2016, it was about beach access for disabled people everywhere.

“It’s just so thoughtful — these beautiful beach mats. I’m so grateful to the city of Boca Raton,” Taylor said toward the end of her visit.

Taylor, who lives near Daytona Beach, visited on July 21 as part of her Takes Flight campaign to advocate on behalf of people with disabilities and to see what Florida communities have been doing to make life easier for those who use walkers, wheelchairs and canes.

“This honor allows me to reach other people, especially women, with my message,” she said. “Being in a wheelchair represents freedom, and isn’t something to be ashamed of.

“My mother told me something when I was only 6, and I never forgot it. She told me, ‘Never give up,’ and I never have. You never know what’s coming next. That’s what I tell people.”
Her message was inspiring to everyone who had come to Spanish River Park to watch Taylor demonstrate Boca Raton’s mobility mats, which allow people in wheelchairs or who use walkers to move over sand to very near the water line — or even into the water when the conditions are right.
The welcome party included Deputy Mayor Mike Mullaugh. He took a turn pushing Taylor’s wheelchair up and down the mats and noted that the city bought the mats “so that any resident of Boca could use as many of the fine resources of the city as possible, even if they are unable to walk.”
The Boca mobility mats are now installed at several beach locations. But they are taken up during sea turtle egg-laying and hatching season, which runs from March through November. They were put down especially for Taylor’s visit.
The city bought and installed these bright blue mats in November at a cost of $11,900. The mats run from the beach entrance toward the water, forming a T at the water’s edge.

A number of people joined Taylor for this event. They included Helene Schwartz, 49, of Boca Raton, a lively woman whose legs were amputated below the knee because of an MRSA infection.
“I always wore my prosthetic legs before,” she said. Now, on the beach at least, she doesn’t use them. Schwartz was there with her boyfriend, Bill Nagle, whom she met when using mobility mats installed at Deerfield Beach.
Arthur Cohn, 79, is another Boca Raton wheelchair user who joined the group. His daughter told him of the event.
“She lives in Maryland,” he said. “But she reads our local papers on the internet each day. She told me about this event, so I came over.”
Cohn suffered a back injury 22 years ago, but has required a wheelchair only the past two years.
Taylor preceded her official remarks with information about her own disability — POTS, a variation of a genetic condition called dysautonomia. Those with dysautonomia have trouble regulating the autonomic nervous system.
Taylor, 33, at first had only a mild version of dysautonomia. She forged ahead, earning a degree in psychology from the University of Florida, and then a master’s degree in counseling for victims of domestic violence and suicide prevention.
Along the way, she took flying lessons. That’s where she met her husband, Randall Taylor, a flying instructor at Embry-Riddle Aeronautical University’s Jupiter campus.
Embry-Riddle is a strong supporter of the Ms. Wheelchair Florida contest, and provided a plane for Taylor to fly to Boca Raton and the other cities on her tour, which took place July 18-26. She was accompanied by her husband, who flew the plane, as well as her daughter.
It was only after the birth of her daughter, Grace, now 6, that Taylor’s condition became severe. One consequence was that she had to keep her feet elevated.  “I couldn’t even walk,” she said. So she crawled around on the floor to take care of her 8-month-old baby.
“I knew there had to be a better way,” she said.
A wheelchair proved to be the key to liberation, allowing her to better move around and take care of her daughter.
Now, explaining her mission as Ms. Wheelchair Florida, she said she wants to help other moms who are afraid that using a wheelchair means they have limit themselves.
“No matter what, I want women to know they have support,” she said. “I tell them, ‘Never give up on the life you have.’ There is beauty in life. If you give up, you’ll never know what’s going to come up next.”
Taylor has packaged her message in some innovative ways. She has created a positive mantra based on the acronym for her condition.
“I don’t consider POTS to be something that can take away my quality of life,” she said. “Instead, I consider it a Perfect Opportunity To Shine — P-O-T-S.”
She tells people, “Don’t go into self-pity. Every breath you take is a reason to make your life better. You need to go out there. Wheelchairs are freedom, not scary. They are a way to access the world.”
Taylor’s brief talk inspired everyone listening.
“She is doing wonderful things,” Mullaugh said. “She recognizes there is a need out there, and she can do something about it. She’s a bright, articulate and intelligent person.”
Next for Taylor comes Ms. Wheelchair America, Aug. 8-14 in Grand Rapids, Mich.
The parent organization was formed in 1972 to recognize the accomplishments of women who use wheelchairs for mobility.