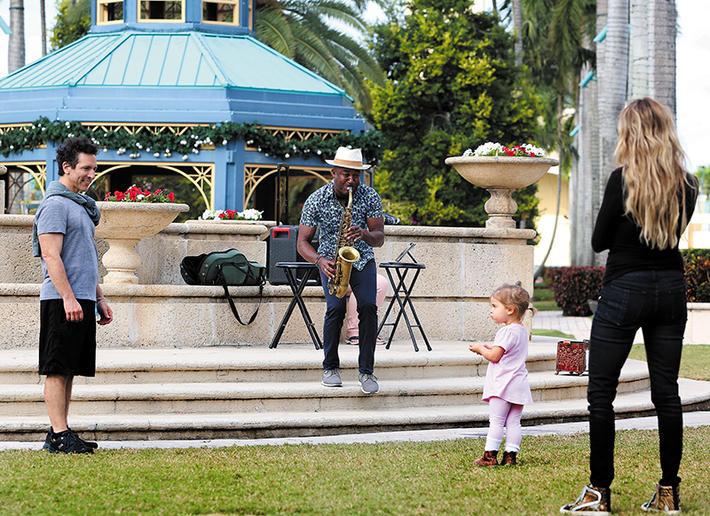 Mizner Park, launched as a visionary redevelopment project that transformed downtown Boca Raton, is about to turn 30 years old.
Its Jan. 11 birthday is a significant milestone for the 30-acre Mizner Park, one of the first mixed-use developments in the country that included shops, restaurants, offices and apartments when it opened in 1991.
The concept developed after city officials recognized they had a problem. The Boca Raton Mall on what is now Mizner Park land was a nearly empty eyesore shunned by residents.
The problem was not unique to Boca Raton. Across the country, stores were fleeing downtowns for the suburbs. The Town Center mall on Glades Road, opened in 1980, had siphoned customers away from downtown businesses. A worker changes the marquee at the Boca Raton Mall’s AMC 6 Theatres before the mall was demolished to make way for the construction of Mizner Park.

The city, through its Community Redevelopment Agency, launched a years-long effort to replace the decaying mall and then revitalize the rest of downtown.
Developer Tom Crocker, architect Richard Heapes and the late land use attorney Charles Siemon and his law partner Wendy Larsen were among key players in the
effort.
As plans firmed up, Boca Raton residents backed a new vision of what the Boca Raton Mall site could be by agreeing in a referendum to spend $50 million on infrastructure improvements and $68 million in bond financing to start the project.
On the day of Mizner Park’s grand opening, then-CRA chair Jamie Snyder proclaimed, “Our downtown now has a heart.” Even so, Mizner Park got off to a rocky start, with City Council members second-guessing whether they had made the right decision to build it, according to media reports at the time.
But as early tenants such as Liberties Fine Books, Music and Cafe and Max’s Grille drew enthusiastic customers, Mizner Park achieved city leaders’ goal: It gave people a reason to go downtown. 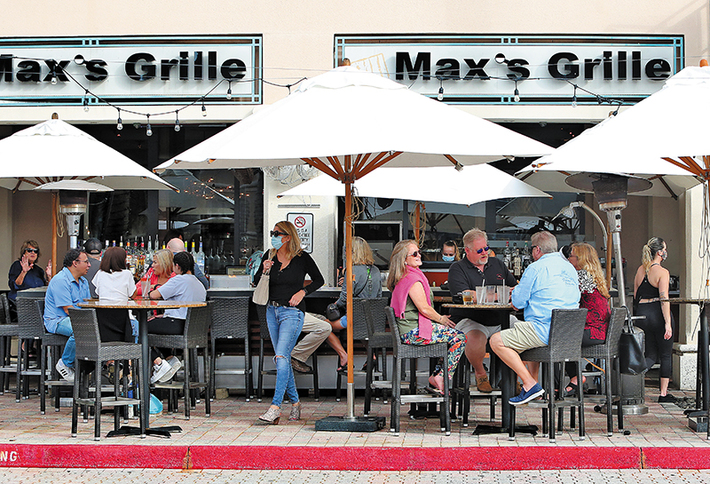 Max’s Grille, an original tenant of Mizner Park, draws a crowd to its outdoor bar and seating areas on a Sunday afternoon. Tim Stepien/The Coastal Star

It also helped spur other hoped-for redevelopment.
Over the last 10 years, the downtown has gained new condominiums, apartments and the Hyatt Place hotel. The Mandarin Oriental hotel and residences are now rising from the ground.
“Mizner Park was very visionary for the city to do,” Larsen said. “It certainly acted as the catalyst it was intended to be.”
As a mixed-use project, “it was a trailblazer,” she said.
Today’s city leaders say Mizner Park remains as important now as when it opened.
Deputy Mayor Andrea O’Rourke, a longtime downtown resident and former chair of the CRA, said she always was a big supporter of Mizner Park.
“It was a great contribution to the community,” she said. “It was an upgrade that was the beginning of downtown redevelopment.
“I think it is a definite attraction and creates a sense of place for the downtown.”
Mayor Scott Singer agrees. “Mizner Park set the stage for the thriving business, residential and cultural district that downtown Boca has become,” he said. “It remains a key part of the fabric of our city today.”
Mizner Park now has 39 businesses, including 14 restaurants, five women’s and three men’s clothing stores, and two shoe stores.
Two of its major tenants are Lord & Taylor, which in 2020 filed for bankruptcy court protection and announced that it was closing all its stores nationwide, and IPIC theater, which has fallen behind on its rent, according to court filings.
The city owns the land on which businesses sit, and leases it to Brookfield Property Partners.
The city also owns the land north of the shopping and dining area that is leased to the Boca Raton Museum of Art and owns and operates the next door Mizner Park Amphitheater.
Because of the coronavirus pandemic, Brookfield plans no celebratory events to mark Mizner Park’s birthday.
“Brookfield Properties is committed to Mizner Park remaining a cornerstone to Boca Raton as a premier shopping, dining and lifestyle destination,” Brookfield Senior General Manager Michael Cook said in a statement. “As we celebrate this milestone anniversary, we remain focused on delivering a high-caliber tenant mix. …”
New tenants coming to Mizner Park in 2021, Cook said, are Calaveras Cantina, serving Mexican cuisine; Anna Zuckerman jewelry; Hotworx fitness studio; Strike 10 bowling center and sports bar; and Egg New York, a children’s fashion store.
Bigger changes could be on the horizon.
Brookfield has not yet announced how it will redevelop the significant amount of land now occupied by the Lord & Taylor building and parking garage.
But Larsen, who represents the leaseholder, said that “what is planned is not retail.”
Mizner Park originally was envisioned as including a strong cultural component, a goal that has been only partially realized.
That could change if an ambitious proposal by a cultural arts group becomes reality.
The Boca Raton Arts District Exploratory Corp. hopes to build a cultural complex across from the Museum of Art.
The group proposes completely renovating the existing 3,500-seat amphitheater and adding a new theater building, additional indoor and outdoor performing arts spaces, a rooftop terrace and more parking.
The City Council and the arts group are in negotiations to reach a deal that would allow the $121 million project to launch. Brookfield supports the project.
Another important matter is unresolved.
Brookfield is considering exercising its option to buy much of the land underneath Mizner Park from the city.
But the CRA and Brookfield are at odds on how to calculate the fair market value of the land. That issue is being litigated in Palm Beach County Circuit Court.