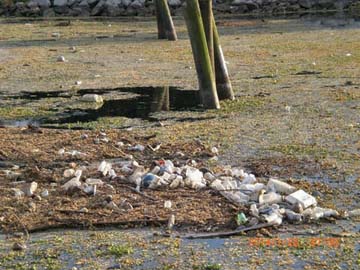 Trash is accumulating in the Hillsboro Canal

between Boca Raton and Deerfield Beach.

In January, heavy rains sent debris, including plastic bottles and vegetative waste, into the canal stretching from the canal gate near Military Trail to the Royal Palm Yacht Club on the Intracoastal Waterway, where the sludge clogged the intakes of boats.

Whelchel, in a letter dated Feb. 6, asked the governor to provide “guidance and direction to the water districts responsible for the maintenance of these canals.”

“This situation has become critical,” she said. “The impacts to the water system, the disturbance to the environment, and the unsightly accumulations are not acceptable.”

Richard Johnson, a member of the Royal Palm Yacht Club, made a presentation including photos of the trash in the canal last month to the Boca Raton City Council.

“When it rains heavily and the South Florida Water Management District and the Lake Worth Drainage District open the gates upstream, and they haven’t cleaned up the garbage, which they don’t do, all that garbage comes down. It ends up in the intakes of the boats, and we have to send a diver down and unclog the intakes,” said Johnson.

“If we didn’t make a lot of noise, the trash would probably still be there,” said Johnson, who lives on the Intracoastal, where he see the debris that the canal dumps into the waterway. “It then goes into the ocean. A friend was telling me about a dead whale that had 50 pounds of plastic in its intestine.”

Johnson believes the answer to the trash problem is regular cleanups behind the canal gates.

The large amount of trash in the canal in January was primarily the result of extremely bad weather, said Randy Smith, spokesperson for South Florida Water Management District.

“We had two incredibly strong weather systems that dumped 20 inches of rain. We had an enormous amount of runoff, and an extraordinary amount of debris pulled toward the gates,” he said.

The debris swamped the nine major canal gates from Palm Beach to Miami-Dade, which the district maintains. “It’s a big job trying to keep these clean. It’s impossible to clean all nine gates at the same time.”

The cleanup is done on an as-needed basis. The district’s primary concern is that nothing interferes with the flow of water out, and if that had been the case at Hillsboro, it would have gotten priority, he said.

The cleanup of the canal started around Feb. 10.

"It’s presently clean,” Rolando Lequeux said Feb. 19. He had taken photos of the debris behind his house in Boca Raton. “But it builds up again. It’s an on-and-off problem and happens when there are heavy rains,” he said.

Lequeux says the South Florida Water Management District responds when they’re called. “They are helpful and never turn us down. The thing is, we have had to call them and they don’t come immediately. They have other duties,” he said.

Polluters dumping their vegetation and trash such as plastic jugs into the canals is also a big part of the problem, Smith said.