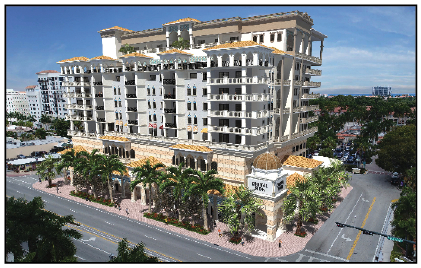 ABOVE: The initial mixed-use building is proposed to front on Federal Highway. BELOW: A later phase of the project is planned for the northeast section of the property. Renderings provided

Nearly two years after withdrawing plans for redeveloping Royal Palm Place, Investments Limited is back with new plans for two portions of the 14-acre site that would dramatically change the look of the longtime shopping and dining destination.
The largest owner of commercial properties in downtown Boca Raton plans two buildings. If the city approves, the first one out of the ground will front Federal Highway between Southeast Second and Third streets. It will include 69 luxury rental units, 11,156 square feet of retail and restaurants, and parking for 301 cars, with construction starting next year.
Shortly thereafter, Investments Limited plans to start work on a larger building on the northeast section of the property at the intersection of Southeast Mizner Boulevard and Southeast First Street. It would include 220 high-end rentals, 4,560 square feet of retail and restaurants and parking for 500 cars.
Plans call for restaurants and retail to fill the first floor, parking masked from public view to be on the next floors and residential units to top the building.
The city allows buildings as tall as 140 feet, with an extra 20 feet for architectural elements, in that part of downtown. Architect Doug Mummaw, of Mummaw and Associates, said heights would be varied in both buildings.
The overall aim of the redevelopment is to transform Royal Palm Place, built in 1966, from the appearance of a suburban-style shopping center to an urban center that meets current demands of retail and restaurant tenants. It will include landscaped outdoor areas that adhere to the city’s requirement that 40 percent of the property be open space.
“It is the first two steps to bringing Royal Palm Place from the 1960s to the 2020s,” said Robert Eisen, of Investment Limited’s legal department.
“We are creating essentially a modern interpretation of Renaissance-style architecture in a vertical form,” Mummaw said. “Each building will have a unique personality.”
Five architectural styles will be used.
Investments Limited also is addressing Royal Palm Place’s well-known parking problem. Although it met the city parking code in 1966, the code has since been revised. When the site is completely redeveloped, it will meet current code and could have 1,600 spaces.
Plans submitted to the city in June are for the second phase of redevelopment. The first phase came in 2006 when Investments Limited built a 185-unit luxury apartment building adjacent to the retail and dining area.
Although Investments Limited plans to redevelop the entire site, Eisen could not yet say when it will submit additional phases to the city.
Eventually, the Garden of Humanity will be expanded at the center of the site and an “entertainment district pedestrian promenade” lined with shops and restaurants will course through the south end of the property and could host special events. The Addison Mizner statue will remain.
Investments Limited’s plans to redevelop Royal Palm Place in phases differs from its previous proposal to redo the entire property at once.
The luxury rentals in the second building would be across Southeast Mizner Boulevard from the proposed Mizner 200 luxury condos.