Miami developers Key International and Integra Investments have purchased a 3-acre waterfront site on Lake Boca Raton for $17.3 million.
The seller is an affiliate of the Blackstone Group, a New York-based private equity firm that owns the Boca Raton Resort & Club. The site, 725 S. Ocean Blvd., is across the lake from the resort at the base of the Boca Inlet bridge.
Key and Integra did not announce plans for the vacant property at the time of the July purchase but indicated they intend to build a low-rise condominium.
“We are very excited to have completed this transaction, acquiring such a special site in a top tier submarket,” Key International Co-President Inigo Ardid said in a news release. “This was a competitive land purchase being one of the last prime waterfront parcels in South Florida. There is a strong appetite for new luxury product in east Boca Raton, and we look forward to soon sharing our development plans.”
The project will be Key’s first condo development outside of Miami-Dade and Broward counties, a Key spokeswoman said.
Key’s portfolio includes 1010 Brickell, a 387-unit condo on Brickell Avenue in Miami; The Harbour, a 425-unit condo in North Miami Beach slated for completion next year; and 400 Sunny Isles, a 230-unit luxury, waterfront development in Sunny Isles Beach.
Integra built Sereno, a 38-unit luxury, waterfront condo in Bay Harbor, and is now developing ParkSquare in Aventura, a 7-acre mixed-use development with 131 condos, 50,000 square feet of retail space, 145,000 square feet of office space, a hotel and an assisted living facility set to be completed in 2018.
H. Wayne Huizenga’s Boca Resorts Inc. sold properties, including the Boca Raton Resort & Club and Hyatt Pier 66 and Radisson Bahia Mar in Fort Lauderdale, to Blackstone in 2004 in a $1.25 billion deal. 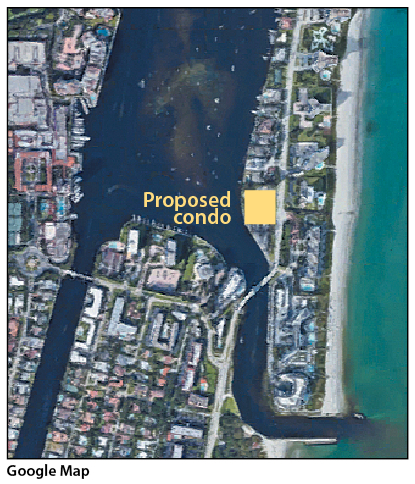