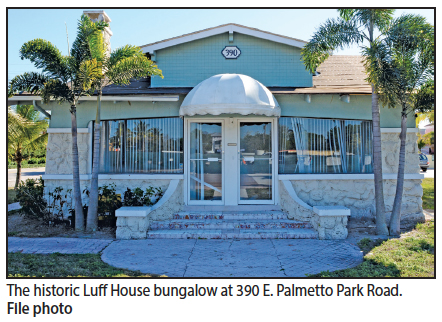 Restaurateur Arturo Gismondi confirmed he intends to convert the historic Luff House into a restaurant by this time next year.
The two-story, 2,492-square-foot Luff House — named for pioneer residents Theodore and Harriet Luff — was built in the 1920s at 390 E. Palmetto Park Road in a Florida interpretation of the bungalow style, employing coral rock on the porches and chimneys. Although it is a familiar sight in Boca Raton, the building has never received a historic designation.
Gismondi, 46, said the restaurant will be called Luff’s Fish House, with both indoor and outdoor seating.
“We had a soft spot for that location and for the historical aspect of the building,” Gismondi said. “We always wanted to put a concept in there.”
Gismondi added the building’s structure inspired the restaurant, for which he has acquired a 10-year lease from owner James Batmasian.
“I’m the type of restaurateur who doesn’t think he’d like to open a fish house and then go looking for a location,” he said. “This location suggests a Key West-style fish house that’s very informal, very outdoorsy, where customers can wear flip-flops. We’ll only use the first floor for the restaurant, while the second floor will be used for storage.”
Gismondi’s vision for the restaurant — realized by local architect Derek Vander Ploeg — will have seating for about 45 diners inside with room for more than 100 outside, under two covered porch areas, which he sees mimicking the structure and tone of the house.
“It’s going to catapult Palmetto Park Road into a lively street,” he said. “It’s going to be one of the first concepts where passers-by will see a lot of people outdoors. We’ll have fish sandwiches provided by local fishermen — grouper, snapper, mahi-mahi, oysters, clams — and a bar. We’ll probably serve lunch and dinner seven days a week.”
Gismondi, who lives in East Boca, is no stranger to the restaurant business. He opened Trattoria Romana about a block away from the Luff House in 1993, as well as Cannoli Kitchen in two Boca locations, at 2001 N. Federal Highway and 22191 Powerline Road.
“I also opened the Biergarten restaurant in Royal Palm Plaza and most recently La Nouvelle Maison, which is adjacent to Trattoria Romana,” he said.
Gismondi said his only hurdles to opening Luff’s Fish House involve reassuring Boca Raton city officials that the transition from a residence to a restaurant will go smoothly.
“Nothing has been done to the property in over 15 years,” he said. “So now it’s about approaching the city with our concept and explaining what we want to do. They’ve been very cooperative. They’re very happy about this, but there are rules that need to be adhered to as well, such as Americans with Disabilities Act regulations, parking and traffic impacts.
“I’m really excited about the project. There are not a lot of fish houses in the area and I feel like we’re filling that void.” Ú