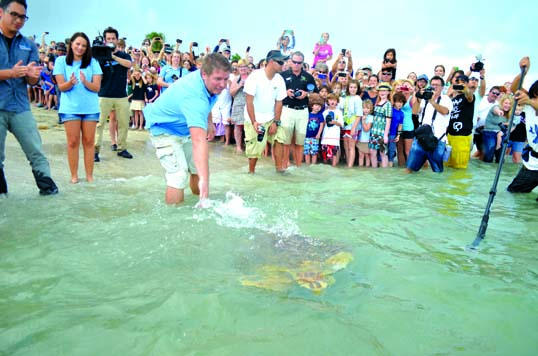 Giving the turtle a name was easy. Giving her back to the sea took months.
On July 28, a loggerhead turtle arrived at the Gumbo Limbo Nature Center without a name, without a left flipper, without much chance of surviving.
Two fishermen had brought her to the city marina in Pompano Beach that Saturday night. A shark had taken the left front flipper. Her right flipper was nearly severed and, judging by the teeth marks, her head had been in the shark’s mouth.
“Sea turtles are usually only attacked if they’re already sick or injured,” explained Ryan Butts, the center’s turtle rehabilitation coordinator. “They float when they’re sick or injured, and that makes them vulnerable, so it’s amazing she got away.”
Butts and his team of volunteers named their patient Cindy, and nursed her for the next three months.

Her right flipper was sutured, her blood drawn to monitor glucose levels, her wounds cleansed daily and treated with honey, a natural disinfectant and antibiotic.
And then, on Nov. 15, Cindy went down to the sea again.
“You almost feel like your children are going off to kindergarten for the first time,” said Butts. “There’s a certain sadness, but that’s overshadowed by the happiness and pride you feel.”
Can a turtle conquer the ocean waves without a left front flipper?
“They learn to adapt with very little problem at all,” he said. “The propulsion comes from their front flippers, with the rear used for steering, so Cindy will use her right rear flipper to compensate.”
As he spoke, a camera crew from television’s National Geographic Wild channel scurried about, taping the preparations. In town to record a segment about the center’s new artificial reef tank, they had happily found themselves able to document Cindy’s release as well.
Nearby, a dozen children lined up to sign a Bon Voyage poster.
Enjoy the seas.
Take care.
Good luck.
We will miss you.
Cindy is the man!
Shortly before 4:30 p.m., Butts and three assistants lifted her out of the blue plastic tank that had been her hospital room and placed her on scales. Cindy had come to the center weighing 115 pounds. She was leaving at 130. 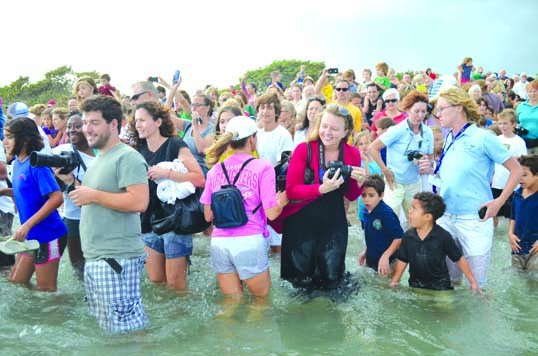 Nearly 350 well-wishers braved the surf and an impending downpour to watch Cindy return to the ocean.

Transferred to a green wading pool atop a cart, they wheeled her out of the rehab center to an ATV, climbed aboard and drove away, followed by other ATVs and the National Geographic crew.
Traveling slowly, the cavalcade rolled into the parking lot and through the gate, crossed North Ocean Boulevard to Red Reef Park, and climbed the dunes.
On the beach below, nearly 350 men, women and children — especially children — awaited her arrival, alerted by the Friends of Gumbo Limbo.
Cindy remained unimpressed by the attention.
“There’s a sandbar not far offshore,” Butts said, “so we may have to give her a little nudge.”
As he spoke, a black thundercloud sailed in from the west.
Butts and three or four volunteers lifted Cindy from her wading pool and placed her gently into the rising tide as the crowd broke into cheers, hoots and applause.
Butts followed along in the surf as the turtle swam into the waves, then south.
Out on the sandbar, a lone nature photographer named Ben Hicks kept watch.
Moments later, as the first fat raindrops fell, he raised an arm and signaled to Butts.
Cindy had passed the sandbar under her own power.
She was gone. 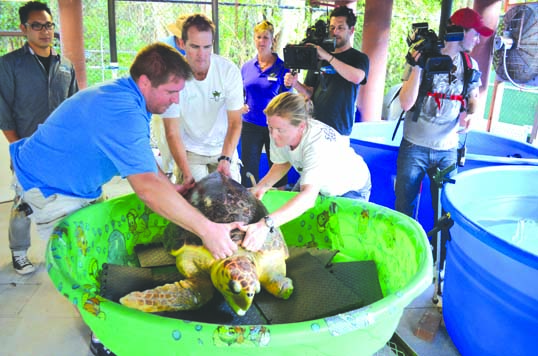 Ryan Butts (left) and assistants used a kiddie pool on a landscaping cart to transfer Cindy from her blue plastic home en route to the ocean. Jerry Lower/The Coastal Star