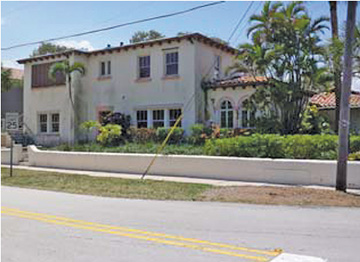 The Giles House, home for 31 years to the restaurant
La Vieille Maison, deteriorated as it sat vacant.
Photo courtesy of the Boca Raton Historical Society

The 1927 house fondly remembered as Boca Raton’s favorite French restaurant has been demolished.

La Vieille Maison defined Old World charm in fine dining for 31 years. But the old house deteriorated after the restaurant closed in 2006, prompting city officials to condemn it last month.

“It was an unsafe structure and had to be taken down,” Assistant City Manager Mike Woika said. “It had been neglected too long.”

“It’s a crime,” said Marvin Kaplan, a patron for three decades.  “Nobody should have destroyed it.”

The city’s Historic Preservation Board asked the City Council last month to designate the house as historic. But city building inspectors determined it would be impossible to restore.

“Everybody wanted to save it,” Boca Raton Historical Society executive director Mary Csar said. “Many people had ties to the restaurant because they had dined there.

“But it was just in such bad shape,” Csar said.

The demolition (completed early in November) leaves former patrons such as Kaplan and his wife Carol-Lee with only memories of the restaurant where they always went for special occasions such as their children’s birthdays and engagements.

“We’d go there for every event that we could call a special event — and we stretched it a bit,” Kaplan said.

La Vieille Maison was known as the grand dame in fine dining. Nothing matched its ambiance. Waiters in tuxedos gave menus with prices only to gentlemen. Ladies never saw them. The gentlemen were required to wear jackets. Classical music played in the background, blending with the glow of candlelight. 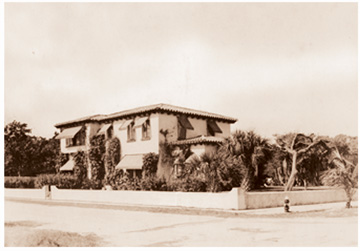 The building in happier times, as the Giles House.
Courtesy of the Boca Raton Historical Society

The menu featured such delicacies as caviar with buckwheat blini and fois gras with lingonberry preserves.

The filet mignon was dressed with béarnaise or bordelaise. The escargot, lobster bisque, steak tartare and sweetbreads matched the culinary delights offered by the finest French restaurants in Paris.

Owner Leonce Picot hired only career waiters and captains, who remembered the wine choices of patrons and how they preferred to have their food cooked. They were polished professionals who knew how to prepare and serve crepes Suzette tableside.

“Each waiter would each speak three or four languages,” patron Kathy Assaf recalled. “We would phone ahead and say what language we wanted spoken at the table.”

That was convenient for her husband, Ron Assaf, the Sensormatic founder who did business in 100 countries. La Vieille Maison was the perfect restaurant to entertain foreign executives when they came to Boca Raton.

“We could have our food cooked in special ways,” Kathy Assaf said.  “They would accommodate us in any way.”

The two-story restaurant shaded by massive live oaks had several private dining rooms in addition to the main dining room on the first floor.

Some rooms were the perfect size for business groups and large family occasions. Other more intimate rooms in the old house were a favorite spot for marriage proposals.

The Kaplans always requested the Goldfish Room, where the table overlooked a koi pond.

“It was probably the best French restaurant within 50 miles,”  Kaplan said. “When it closed, I didn’t want to go to another French restaurant. It was that good. I wanted to savor the memories.”

The 2006 closing came after Picot received several offers to buy his property at 770 E. Palmetto Park Road. A historic designation for the house would have prevented its demolition.

“I used to think it would be nice to have that designation. But boy, I’m glad I didn’t do it — I’d never be able to sell it,” Picot was quoted as saying five years ago. He received $2.6 million for the property.

The 1927 house was built by Thomas Giles, an engineer for architect Addison Mizner, in the same Mediterranean Revival style that Mizner had chosen for the distinctive homes that he built in Old Floresta two years before.

The Giles family lived in the house for 25 years until it became the Por La Mar Apartments in 1953 and later a real estate office before Picot’s purchase.

The current property owner, TJCV Land Trust, hasn’t requested city permission as yet to construct a new building at the site, Woika said.