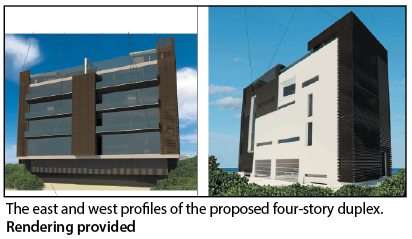 Boca Raton’s City Council must reconsider its 5-0 decision not to grant permission to build a duplex on the beach, Palm Beach County circuit judges say.
Council members Andrea O’Rourke and Monica Mayotte prejudged the application by 2600 N. Ocean LLC proposing a four-story, 14,270-square-foot residence east of A1A between Spanish River Park and Ocean Strand, the judges decided.
At a Feb. 26, 2019, City Council meeting, attorney Robert Sweetapple, representing the landowner, showed a campaign video of then-council member and now Mayor Scott Singer standing on a dune and declaring he could not support plans for a house on the beach. Sweetapple also had copies of emails that O’Rourke and Mayotte had sent constituents saying they would vote against variances for construction seaward of the Coastal Construction Control Line.
In a ruling issued Sept. 16, Circuit Judges Jaimie Goodman, Janis Keyser and G. Joseph Curley said Singer’s statements constituted a “general political stance made in a campaign video” and were permissible. But O’Rourke’s and Mayotte’s emails to residents — saying they had “no intention of granting [the application]” and “[would] do all I can to prevent this from happening” — showed they were not impartial, the judges said.
“This was more than mere political bias or an adverse political philosophy — it was express prejudgment of Petitioner’s application,” the judges wrote.
Their ruling said 2600 N. Ocean LLC “is entitled to a new hearing without the participation” of Mayotte and O’Rourke, who has since become deputy mayor. That would leave Singer and council members Jeremy Rodgers and Andy Thomson to rehear the application.
But Rodgers, a Navy Reserve officer, has been deployed on active duty to the Mideast and has not attended a council meeting since late June.
Sweetapple promised even more litigation over the parcel, which was recently appraised at $7.2 million.
“Boca Raton has engaged in a decades-long program to deny any development of this private, taxpaying, oceanfront property. To date it has failed to acquire the property as part of its spectacular oceanfront park system,” he said. “The continued denial of any reasonable development of this parcel constitutes a taking. The ongoing illegal actions of the city will continue to be addressed in the courts.”
Each side of the proposed duplex would have had a rooftop with a pool, spa, fire pit and outdoor kitchen. Sweetapple said the building would have special glass facing the ocean that would transmit only 10% of interior light, below the city’s request for 15%, and have only 8% reflectivity. Lighting is a concern for nesting and hatchling sea turtles.
Council members caused an uproar when they gave a zoning variance in late 2015 for a four-story beachfront home two parcels south, at 2500 N. Ocean Blvd. The state Department of Environmental Protection issued a notice to proceed with that project, which still needs review by the city’s Environmental Advisory Board and another council vote. Ú