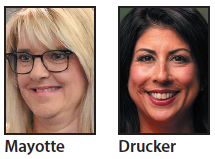 “I am just very proud that the Boca Raton voters have put their trust in me for another term and proud to represent them for another three years,” Mayotte said shortly after winning her race.
Drucker said her victory “proved that truth matters and Boca Raton looks forward, not backward,” referring to the negative campaigning against her by her chief competitor, former City Council member and Deputy Mayor Constance Scott, who won 33.6% of the vote.
“I am looking forward to the next three years,” Drucker said.

Seat D race
Mayotte, a former sustainability specialist with JM Family Enterprises and a strong advocate of environmental protections, campaigned on helping the city’s businesses recover economically from the coronavirus pandemic, ensuring public safety and pursuing responsible and innovative development.
“I look forward to bringing all these ideas forward,” she said.
Stenberg, vice president of the Boca Raton medical office real estate management firm the Greenfield Group, stressed helping businesses recover, the importance of finding a strong replacement for City Manager Leif Ahnell, who plans to retire in 2024, and finding ways to make up for the pandemic-induced decrease in commercial property values.

Seat C race
Drucker, a first-generation Cuban American who is the first Hispanic to serve on the City Council, prioritized helping businesses recover and commonsense development.
A former human resource manager for ADP, Drucker is a longtime volunteer, including with the Boca Raton Historical Society and Junior League of Boca Raton.
Scott, who is now director of local relations at Florida Atlantic University, stressed her experience in government and business and prioritized public safety, helping businesses recover and protecting the city from overdevelopment.
The two other candidates for Seat C were Josie Machovec, a stay-at-home mom best known for being one of four plaintiffs in ongoing litigation to overturn Palm Beach County’s mask mandate. She won 10.5% of the vote.
Bernard Korn, a real estate broker, had twice lost elections to Singer and says he is now also running to defeat U.S. Sen. Rick Scott. He did not participate in candidate forums and received 4.9% of the vote.

Campaigns turned negative
In the campaigns’ final weeks, Stenberg and Scott pivoted to negative campaigning.
Stenberg accused Mayotte of having the “wrong priorities,” “offending residents” and “costing taxpayer money.” Mayotte did not return fire, saying residents wanted to know candidates’ stands on the issues.
Scott claimed Drucker was unfairly chosen to replace Rodgers in a “political power grab” and is “bankrolled by special interests.”
In response, Drucker said Scott lied about her meeting attendance record and accused Scott of having ties to special interests and to former Mayor Susan Haynie, who is now awaiting trial on public corruption charges.
Although both leveled the special interests claim, campaign finance records show both Scott and Drucker received support from the developer community.

Charter amendments pass
Voters also overwhelmingly approved two proposed city charter amendments.
One lengthens the time a person must have lived in the city from 30 days to one year before he or she can qualify to run. It also disqualifies candidates from running who have a homestead exemption on property outside the city limits.
The second amendment eliminates the requirement that candidates pay a $25 qualifying fee. It instead requires candidates to submit a petition with the signatures of at least 200 city voters.

Campaign finances
Mayotte and Stenberg self-financed a large portion of their campaigns. Mayotte lent her campaign $50,000, while Stenberg lent his $52,000.
Including the loans, Mayotte raised $110,065 as of March 4, and Stenberg raised $86,227.
Contributions to Drucker totaled $102,049 as of March 4, while Scott pulled in $85,938. Machovec raised $7,321. Korn, who received no contributions, loaned his campaign $12,100.
Although City Council races are nonpartisan, the Republican Party of Palm Beach County’s $3,500 contribution to Machovec amounted to nearly half of her contributions. The party also contributed $3,500 to both Stenberg and Scott.
The Democratic Party made no such large contributions to the candidates.