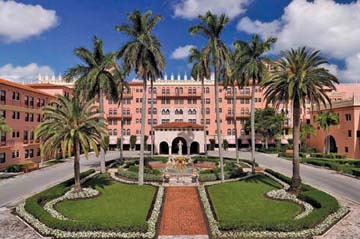 Back on the market after 10 years with the Blackstone Group,

the Resort & Club was founded in 1926 by Addison Mizner.

The Boca Raton Resort & Club, a Waldorf Astoria resort, is on the market, but without a price.
“As with any asset of this stature and size, we need to spend time getting investors educated on the opportunity; we are in the preliminary marketing phase,” said Greg Rumpel, managing director of JLL (Jones Lang LaSalle, Hotels & Hospitality), the agent representing the transaction.
“The property has a specific target audience and it will be the largest single transaction in Florida from the hotel perspective,” Rumpel said. “We are identifying and talking with a number of investors. This is not a property on the corner of I-95.
“The resort is steeped in history, 1,047 rooms, a massive club program and two golf courses. It’s an extensive undertaking for everyone.”
The Boca Raton Resort & Club has been owned by the Blackstone Group for 10 years, which has invested time, effort and money in repositioning the club, he said. “It’s performing well, and it’s the right time to execute its stated goal (which is) to return capital to its investors.”
The Blackstone group had invested more than $250 million in the resort, in addition to its latest $30 million renovation of the Cloister building recently completed.
“We are seeing some large transactions in Florida, and that’s a testament to the strength of the market,” Rumpel said. “We are in a strong cycle right now.”
In 2004, H. Wayne Huizenga’s Boca Resorts Inc. sold the Boca Resort, along with other properties that included Hyatt Regency Pier 66 Hotel and Marina and the Radisson Bahia Mar Resort and Yachting Center, to the private investment group Blackstone in a $1.25 billion deal.
The Boca Raton Resort & Club was founded by Palm Beach society architect Addison Mizner in 1926 as the Cloister Inn. But when Florida’s boom went bust in the mid- to late 1920s, Clarence Geist, a wealthy Philadelphia utilities company owner, took over Mizner’s bankrupt Cloister Inn and reopened the hotel in 1930 as the Boca Raton Club.