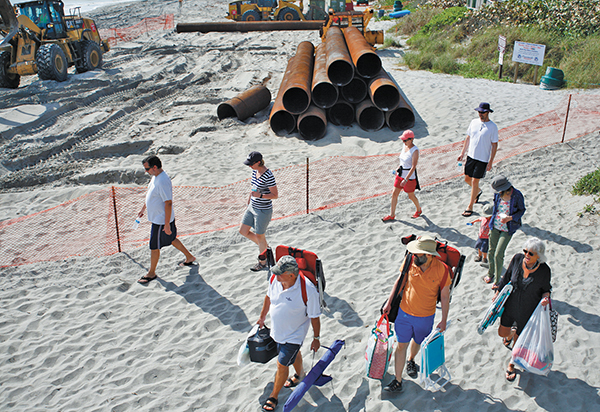 between the Boca Raton Inlet and Red Reef Park has resumed after a nine-month hiatus.

City officials hope to move sand that has shoaled in the Boca Raton Inlet back north to the partially renourished beach it came from, but Hillsboro Beach officials claim the state mistakenly issued a permit for the work.
The town, just south of Deerfield Beach in Broward County, says Boca Raton’s plan will disrupt the natural flow of sand south and wants the Department of Environmental Protection to revoke its approval.
Boca Raton City Council members at their Feb. 14 meeting approved spending $2.4 million to move 80,000 cubic yards of sand north to the renourishment area between the inlet and Red Reef Park, and 100,000 cubic yards south between the inlet and the Broward County line.
City Manager Leif Ahnell asked council members to waive normal purchasing procedures so he could hire Weeks Marine Inc. to do the inlet dredging without going out to bid. Weeks returned in February to finish the central beach renourishment project it started in March 2016 but stopped in late April. The city’s permit does not allow dredging between May 1 and Nov. 30 to protect nesting sea turtles.
“This is not original work intended for the contractor,” Ahnell said. “Sand has flowed down from the central beach project to the inlet and this is to remove a large portion of that.”
Hurricane Matthew contributed to the erosion, he said.
Councilman Scott Singer elaborated.
“So, it’s right to say that we had sand fill up in the inlet faster than expected, we’re taking steps to remediate that quicker than expected, we have to spend more money and that was all because of weather events and the waves and tides pushing sand where we didn’t expect it,” Singer said.
The central beach renourishment will cost about $11.3 million. The state and county will pay about $4 million. The city and the Greater Boca Raton Beach & Park District agreed to split the remainder, about $3.7 million each. The project will make about 1.45 miles of beach between Red Reef Park and the inlet 170 feet wider.
Jennifer Bistyga, the city’s coastal program manager, said Weeks would finish the 2015 renourishment project first, then work on the inlet shoaling provided the DEP permit stands. All work must end April 30.
Boaters have been complaining since last summer about the Boca Inlet being dangerously shallow.
“The use of the ebb shoal for beach renourishment aids the boaters in addition to renourishing the beaches,” Bistyga said.
Ken Oertel, a Tallahassee-based attorney for Hillsboro Beach, told that town’s commissioners their protest would stop Boca Raton from moving the sand dredged from the inlet north.
“It’s pretty well-known that Hillsboro Beach doesn’t believe Boca Raton is passing enough sand,” Oertel said.
The Department of Environmental Protection dismissed Hillsboro Beach’s petition on Feb. 23 but gave the town 15 days to refile its challenge. The petition did not explain how Boca Raton’s proposed dredging would affect the town’s environmental interests, the DEP said.