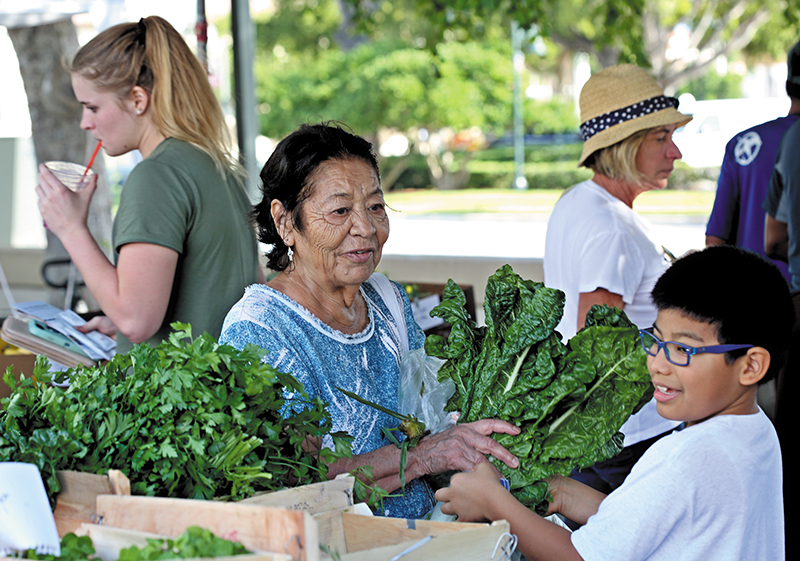 The Boca Raton GreenMarket has ended its 22-year run at Royal Palm Place and taken up new digs in the parking lot north of City Hall.
Growing resentment over scarce parking downtown led to the move away from the shopping strip on Southeast Mizner Boulevard.
“Some of the businesses there suggested that while it’s a great event, it really does kind of mess up their parking on Saturdays,” Assistant City Manager Mike Woika said.
The City Hall lot has “plenty of room, plenty of parking,” Woika said. “We can use the Community Center for facilities.”
Shoppers can park in the lots west of City Hall and the Community Center. Overflow parking is available across Northwest Second Avenue at the Building Administration building and the Downtown Library.
Downtown residents who used to walk to Royal Palm Place can catch a ride to City Hall on the free Round the Town electric shuttles.
Mayor Scott Singer said the green market’s new location could change parking patterns in Boca Raton.
“It actually might get people in the habit of parking over at City Hall and then frequenting other downtown businesses,” Singer said.
The green market relocated the first weekend in December, catching some customers by surprise. But the reaction from shoppers and vendors since then has been enthusiastic, market founder and manager Emily Lilly said.
“It’s like we just picked up from one place and plopped it down in another place,” Lilly said. “It’s the parking that makes the difference.”
The market’s more than 40 vendors offer locally grown foods, plants, specialty items, prepared foods, seafood, bakery products, orchids, fresh flowers, coffee and teas, soaps and lotions, fresh juices, shells and live music. It’s open Saturdays from 8 a.m. to 1 p.m. through May 11. City Hall is at 201 W. Palmetto Park Road.