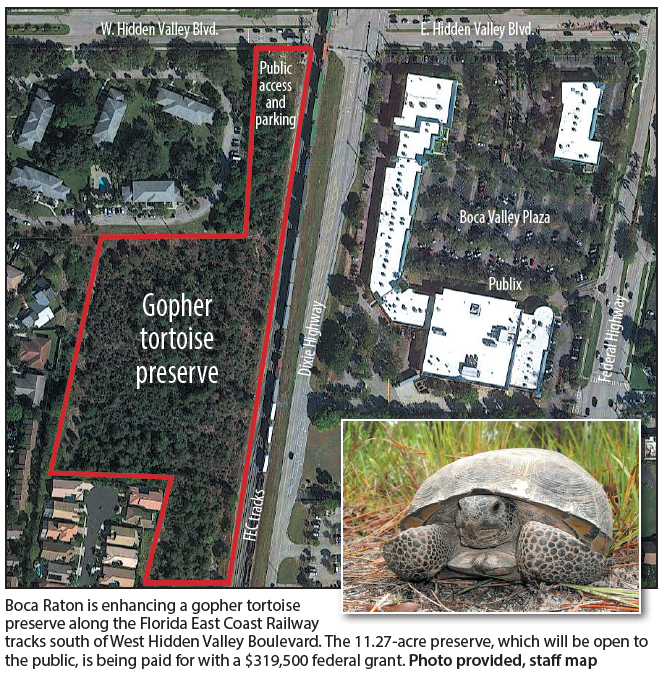 Nature lovers and Boca Raton’s threatened gopher tortoises are getting a boost in the coming budget year — new preserve land is being cleaned up and made accessible to the public south of Hidden Valley Boulevard and west of Dixie Highway.
The enhanced preserve will include 11.27 acres of sand pine scrub habitat, a quarter-mile pedestrian sand path through the preserve, 968 feet of ADA accessible concrete path, six parking spaces with one being ADA-compliant, a bicycle rack, educational kiosk and perimeter fencing. The kiosk will offer information on the history and importance of the site.
The work will be paid for with a $319,500 community development block grant from the federal government.
As part of the project, the site will be cleared of trash and debris that has been dumped over the years, making the site more accessible to the neighborhood.
Project designers WZA Architects and the city’s Recreation Services Department hosted a public information meeting about the preserve at the Spanish River Library on Aug. 17.
Besides the preserve area, gopher tortoises can be seen in an exhibit area at the Gumbo Limbo Nature Center in Red Reef Park. Visitors to the Blazing Star Nature Preserve on West Camino Real, the Yamato Scrub Natural Area on Yamato Road and other sites have also encountered them.
In Florida, the gopher tortoise is listed as threatened, mostly by habitat destruction, with both the tortoise and its burrow protected under state law. The tortoises share their deep burrows with more than 350 other species, and are therefore referred to as a keystone species.
The long-lived reptiles must be relocated before any land clearing or development takes place, and property owners must obtain permits from the state Fish and Wildlife Conservation Commission before capturing and relocating tortoises.
Gopher tortoises occupy upland habitat throughout Florida including forests, pastures and yards, and forage on low-growing plants.