A massive kapok tree dominates the walking path behind the Boca Raton Resort and Club. Its raised gray roots, covered with thorns, stretch toward the walkway like a dragon in the sun.
Longtime golfers and members of the club say the golf course and the tree have much in common — they are beautiful and old, but if you look closely, you won’t want to play on them.
The tree’s spikes are a natural defense mechanism, but the run-down state of the club’s fairways and greens is simply a case of neglect, golfers say. Many of the club members have quit and others are hanging on, hoping new owners will buy the seaside resort and restore the golf course to championship status.
The resort, a historic landmark built by Addison Mizner in 1926, has been for sale for more than two years. Rumors swirled this summer about an imminent sale, but current owner Blackstone Group and administrator Hilton Worldwide will not comment on the sale. 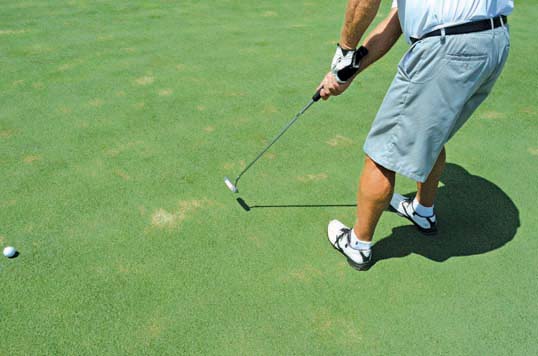 Meanwhile, the 18-hole course has deteriorated. The greens, which were smooth, flat and fast, have not been maintained, the players say. The greens’ grass is as tall as shag carpet, making play sluggish. The ponds and waterways sometimes smell like rotting vegetation. Weeds, dead leaves
and brown patches can be seen all over the par-71 course bordered by East Camino Real on its south and Federal Highway on its west.
“It’s really unfortunate,” says Michael Wohl, a longtime member who quit recently to join a club on the west side of town. “It’s a great group of members and I still have friends there, but life is short and part of South Florida living is having a great course to play.” 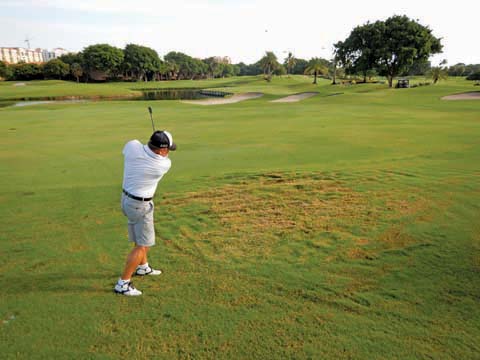 During a round in early August many issues were observed on the course. ABOVE: Soggy spots like this one frequently are a sign of cracked water pipes in the sprinkler system.

Wohl says he finds it ironic that the ads for the resort still tout the championship golf course as a reason the resort enjoys a top-destination ranking.
“Immerse yourself in the rich history and tradition of one of the finest golf resorts in Florida,” the resort’s website says. “Dating back to the times when PGA professionals Sam Snead and Tommy Amour held positions on staff, this exclusive golf resort has always sought to offer a unique, exclusive and exceptional year-round golf experience.”
“It’s a flat-out lie,” Wohl says. “Boca’s municipal course is 10 times better.”
Neither Blackstone Group nor Waldorf Astoria/Hilton Hotels group, which runs the resort, would discuss the players’ specific complaints on the phone. A spokeswoman for Hilton, however, did send an email addressing the resort’s general policy on golf course maintenance.
“The maintenance and conditions of our golf courses and our hotel is of the utmost importance and is always a focal point of our operations in order to continue to provide our guests and members with an exceptional experience at Boca Raton Resort,” wrote Lisa Cole, southeast director of corporate communications for Hilton Worldwide.
“Regular maintenance of our golf course is done on a daily basis, 365 days of the year, by our well trained staff including a superintendent who is a standing member of the Golf Course Superintendents Association of America, to ensure the optimal playing conditions,” Cole said.
“In fact, the resort course received a fleet of new equipment one month ago and has increased its annual maintenance budget including a committed investment in the seasonal over-seeding of the course to occur in November.”
Jimmy Gascoigne, head golf pro at the resort, said he had no comment on whether course refurbishment is planned and referred questions to Cole. 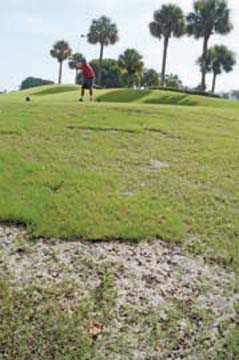 At least three holes had limited amounts of recently laid sod in problem places in the rough.

But players say the hotel management makes only minimal improvements and seems indifferent to their requests for a real restoration of the course. This is particularly galling to those who paid $50,000 to join the club and about $12,000 a year to keep up their membership, members say.
“It’s a deliberate attitude of not caring and willful neglect,” says Sandeep Sharma, who recently resigned from the club. “They will say the golf course does not get enough use to justify the expense, but that doesn’t make sense. If you don’t have a good course, you won’t get the guests you need to maintain the rest of the resort.” 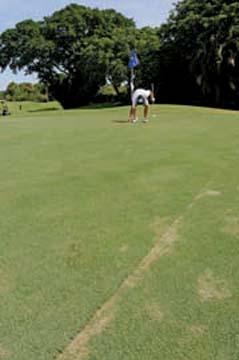 Long brown strips like this one appeared on a green that had been scalped by a mower.

Players say they are especially steamed that the owners have spent millions sprucing up the hotel itself, the spa, the gardens and the restaurant while allowing the fairways to languish.
While the sale price of the resort has not been disclosed, Blackstone has spent more than $200 million renovating the beach club and rooms in the landmark pink Cloisters tower. Blackstone purchased the Boca Resort and two other well-known Fort Lauderdale hotels from investor H. Wayne Huizenga in 2004 for $1.25 billion, according to published reports.
Sharma and Wohl say they were embarrassed to bring friends to the course. They did not want their friends to smell the stinky waterways or see weed-choked grass and bald patches. Both men, however, said they would rejoin the club if the golf course is improved.
“It’s like having a pet and not taking care of it,” Sharma says. “If you have a pet, basic grooming and maintenance are necessities. That’s really all we were asking — basic maintenance and grooming, not a re-do of the whole course.”