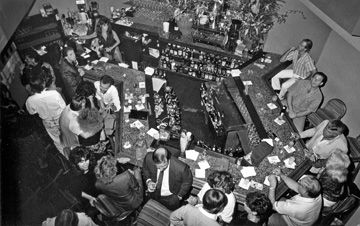 In its 1980s heyday, the Wildflower was packed shoulder-to-shoulder with patrons. 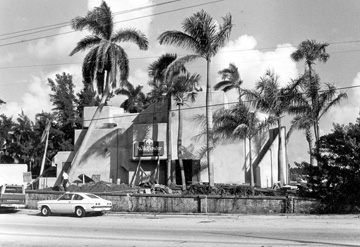 The pink night club under construction in the late 1970s.
Photos courtesy of the Boca Raton Historical Society

Ah, the ’80s in Boca Raton. It was the decade when IBM introduced the PC (designed at the Boca plant), the Old Town Hall and the F.E.C. Railway Station were restored, the Art Guild changed its name to the Boca Raton Museum of Art, and Sanborn Square was beautified as the first project of the city’s new Community Redevelopment Agency.

When it came to nightlife, the place to be was the Wildflower, a glitzy, happening waterfront restaurant and bar on the northwest side of the Palmetto Park Bridge and the Intracoastal Waterway. The music was loud, the circular dance floor crowded. When live bands weren’t performing, a deejay was playing tunes like Olivia Newton-John’s Physical, Michael Jackson’s Billie Jean, and Irene Cara’s What a Feeling.

“The Wildflower was the first real nightclub in Boca Raton in the ’80s,” said Previti, who now lives in  Medford, N.J. “There was a lot of buzz about the place even before it opened and on opening night we realized it was an immediate success.  The clientele was a typical South Florida crowd you could easily image from an episode of Miami Vice. There was an interesting mix of tourists and locals, pimps and drug dealers with bag phones, socialites and wannabes along with an occasional celebrity. One night Joe Cocker came in and the waitress was so excited that she would get to wait on him  — until he stiffed her at the end of the night.  There was no shortage of self-important jerks to deal with.”

Drinks were the usual Florida fare of frozen margaritas and coladas. Specialty drinks were served in tiki glasses covered with images of nude women bulging from the glass. (They’re collectibles now, available on eBay.)

“Once a year for a few weeks, it would be mango season and the owners would insist we make fresh mango daiquiris,” Previti said. “The bartenders hated this, as it was always a mess, but, of course, the patrons loved it.”

When the hit TV show M.A.S.H. was coming to an end the owners organized a M.A.S.H. party where the staff dressed as doctors and nurses, drinks were served in IV bags and there were Korean War-era vehicles parked out front.

“Normally the male staff would wear colored velvet vest and the girls would wear these wrap around type of flower print sarongs,” Previti remembered. “Some thought it was a Shogun theme, as that was a popular TV series at that time, but I don’t think that was the case.”

There would be lines of people waiting to get in on Friday and Saturday nights during the season, Previti said. “We always had one of Boca Raton’s finest at the door to keep things under control.  Inside it would be packed shoulder to shoulder, which made it a challenge to get an arm full of plates across the room or up the stairs to the patrons.”

When things got a little too crazy, cops arrived, as was the case in January 1982, when 15 policemen were dispatched after four unruly men to refused to leave. The four were arrested and several of the policemen were treated at Boca Raton Community Hospital.

It may have been the hottest spot in the city for more than a decade, but by 1999, the once-popular restaurant and bar closed for good.

After racking up code violations, the abandoned Wildflower, covered with plywood, was demolished in 2009 and the city bought the property.

Long before the Wildflower sprouted at the northwest side of the Palmetto Park Bridge — in fact even before the bridge was built in 1917 — the wilderness was inhabited by Boca pioneers.

In 1914, a decade before Boca Raton became a municipality during the height of the Florida’s land boom, Vermont Realtor Harley Gates moved his family to Boca Raton to open a real estate business and start the 30-acre Palmetto Park Plantation, which gave its name to Palmetto Park Road.  He built a one-story home there called Casa Rosa for $3,500.

His daughter, Diane Gates Benedetto (formerly Imogene Gates), recently wrote a book about the city’s history (Imogene Alice Gates: Frontier Child) and recalls living in wilderness: “I remember my swing between two palm trees. Bamboo was growing all over the place, 50 feet into the sky, almost. And all the birds would come there.”

Harley Gates sold Casa Rosa and five acres to Stanley Harris from Vancouver, who turned the bungalow into a showplace with oak floors, a living room and a tower with a winding outdoor staircase.

In 1966, Casa Rosa was bulldozed to make way for a restaurant, but the Wildflower didn’t open until 1980.

“I saw some photos after the place had been abandoned for a few years,” Previti said.  “It was shocking and sad to see that place like that.  I was a beautiful and inviting place when it was in its prime. I remember leaving the place in the wee hours after a shift and picking up the heavy, sweet, intoxicating scent of night blooming jasmine wafting through the air.  It was awesome.  Almost magical.”