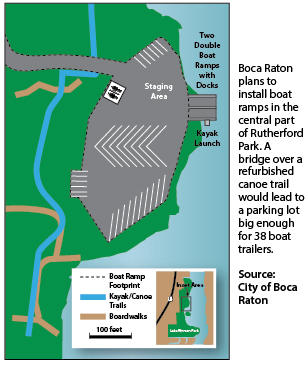 The city’s plans to renovate Rutherford and Lake Wyman parks — revised to appease their Golden Harbour neighbors — have new opponents: the two new commissioners of the Greater Boca Raton Beach & Park District.
Commissioners Craig Ehrnst and Erin Wright, who took their seats in January, were dismayed to learn the proposal includes adding two double boat ramps at Rutherford with a parking lot for 38 boat trailers.
“I would just hate to see a boat ramp put into that natural habitat there,” said Wright, who frequents the park with her two young sons. “I think it would throw off the whole vibe back there.”
Ehrnst also was critical.
“Putting all that concrete and a boat ramp in there — I just have a lot of hesitation to do something that is so permanent,” he said.
Jennifer Bistyga, the city’s coastal program manager, updated the beach and park commission Feb. 6 and asked members if they would finance part of the $6.5 million project. The district had agreed to contribute $250,000 for the earlier plan, which would have cost $3.5 million, with all but $500,000 coming from the Florida Inland Navigation District and Palm Beach County.
Commission Chairman Robert Rollins said the Beach & Park District has since committed millions of dollars to potentially acquiring the Ocean Breeze golf course, installing artificial turf at Patch Reef Park and building a new community center at the Swim and Racquet Center.
“We have a lot of projects on our hands already,” Rollins said.
Vice Chairman Steve Engel agreed.
“I don’t see how we can, given what’s on our plate right now,” he said.
City Council members endorsed building the boat ramps in October.
The ramps are the biggest change to the Lake Wyman proposal. Gone in the revised plan is a seagrass basin that would have been scooped out of a spoil island that FIND owns. Among other concerns, Golden Harbour neighbors feared the project would bring seagrass-munching manatees too close to boats docking at a proposed day slip.
“We don’t want to submerge it anymore, but we want to create a coastal hammock,” Bistyga told the beach and park commissioners. “We haven’t gone too far into what we do there, but it will be all upland, there will be no submerging of lands.”
The revised plan still calls for removing invasive plants, restoring wetlands and a mangrove habitat, restoring and expanding a canoe trail, and extending Rutherford’s boardwalk to Lake Wyman Park.
At a Feb. 27 workshop, City Council members were loath to take money from FIND. Any project FIND finances must be open to residents of all 12 coastal counties that pay its taxes.
City residents “are eager to see us do the improvements. They’re not eager to share them,” council member Robert Weinroth said.
Arthur Koski, the Beach & Park District’s executive director, said commissioners may have money to put toward everything but the boat ramps by 2021, “anywhere from zero to $2 million,” if the city can wait until then. Bistyga’s timetable has construction starting in 2019.
Bistyga also updated commissioners on the city’s waterfront master plan. Fort Lauderdale-based EDSA Inc.’s first task was to visit all city-owned waterfront parcels and the district-owned Ocean Strand property.
“Now they’re going to develop ideas that could be passive park ideas, maybe additional boat launch facilities — not motorized boats but kayak and paddleboards — looking at even just enhancing components of Red Reef east [of A1A], maybe some pavilions,” Bistyga said. “So the consultant now is looking at everything.”
The second task is public outreach, and Bistyga said she hopes something is scheduled in March. EDSA will take that public input and develop conceptual plans for Spanish River, Red Reef and South Beach parks and Ocean Strand.
The city is also looking to turn its Wildflower property into a passive park, she said.