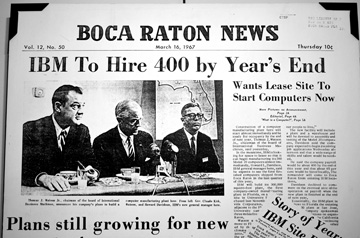 BM announced its plans to open a plant in Boca Raton in 1967.
Courtesy of the Boca Raton Historical Society

Far earlier than that, Glenn Anderson lived and worked them.

Together, the Historical Society and Anderson tell a pretty thorough, and thoroughly compelling, saga. This is IBM’s centennial year, an apt time for Boca Raton to count the ways in which it has felt the company’s significance and clout.

“IBM had a very big influence on this community,” says exhibit curator Susan Gillis, approaching a framed front page of the March 16, 1967, Boca Raton News with its lead headline: IBM to Hire 400 by Year’s End. “In the 1980s, Boca was known as Silicon Beach because [thanks to IBM’s presence] it attracted so many high-tech companies.”

“I don’t think Boca knew what hit ’em,” says Anderson. “It’s an understatement to say IBM made a huge impact on this area. Those first few years, those of us who came in early, it was probably the highlight of our lives: doing challenging work, changing the community.

And change it did. Anderson had been working in the company’s development lab in San Jose, Calif., when he was offered a managerial position at the soon-to-be Boca site — and given 24 hours to accept or not. He hurried to a bookstore and bought a Florida map. Boca Raton wasn’t on it.

“I had no idea if it was in the Panhandle or near Orlando or what,” he says. “I flew into Miami and rented a car, but I-95 ended at Fort Lauderdale. I drove the rest of the way up Federal Highway. The houses were all boarded up then; the beaches were empty. It was like a ghost town.”

The “small, sleepy town” he encountered in May 1967 woke up quickly once the new workforce began arriving and building homes, enrolling children in school, bringing a sophisticated appetite for good wines and gourmet restaurants, theater and art.

Soon after his initial visit, he brought his wife, a California native, to Boca to look around.

“When she stopped crying, I took her into Lum’s for a sandwich and a beer,” he says. “On Saturday, we bought a lot. On Sunday, we picked a model. I lined up a mortgage. It was one whirlwind weekend.”

An even bigger whirlwind came with IBM’s technological advances. The Historical Society exhibit chronicles those in framed photos that line a hallway; original packaging saved by an employee; a roomful of computers that track its progression, each one smarter than its predecessor; memorabilia that includes the Charlie Chaplin logo, a nod to his Modern Times film.

The firm introduced its pièce de résistance in 1981: the IBM PC, the first pre-assembled personal computer, one that could be lifted from the package and plugged into the wall. “It’s really exciting that it was developed right here in little Boca Raton,” says Susan Gillis. “The glamorous era was the 1980s.”

It was the massive-growth era, as well: IBM boasted more than 10,000 employees in that decade to keep up with the demand for PCs. “You could hardly bring people in fast enough,” Glenn Anderson says.

In 1983, Time’s Jan. 3 cover ran a “first.” It named the computer “Machine of the Year,” the first time an object took the place of the magazine’s “Man of the Year.”

The accompanying story, however, was a faux-folksy essay by Roger Rosenblatt, rather skeptical in tone: “Ever see one of these before, mister? Yes, you. I’m talking to you, ma’am. Ever work one of these Commodores or Timex Sinclairs or Osborne Is or TRS-80 IIIs? How do you like them Apples? Just a joke, son. Good, clean fun. But you look so skeptical, like you’re from Missouri, and I want to sell you one of these beauties, ’cause you need it and ’cause you want it, no matter what you say.”

Still, PC sales outweighed PC skepticism. During the IBM PC’s initial 18 months, sales were twice the estimated 250,000. “Once, I could never envision having to use a computer,” says Gillis, “but now try to live without one.”

Ultimately, IBM’s success in Boca led to its downsizing in Boca. In the late 1980s, the company opted to shift its hardware manufacturing to Raleigh, N.C., and its software manufacturing to Austin, Texas. What once was corporate center land now is now to T-Rex, the Boca Corporate Center and Campus just off Yamato Road.

IBM still maintains a four-story building on Congress Avenue — software development and service-and-sales are the main activities there — says Rick Qualman, vice-president of strategy and business development, but the firm won’t divulge the number of current employees “for policy reasons.” He estimates that some 12,000 IBM retirees still live in Florida.

Many, as they approached retirement age in the late 1980s, were offered buyouts. Anderson, then 59, was one.

“It was a little scary,” he says. “I didn’t know what I was gonna do with myself.” But the severance package was a generous one, and he and his wife decided to remain in Boca. Their daughter and younger son — 4-year-old twins when the family moved to Florida — stayed as well. Their older son, 6 at move time, lives in Colorado.