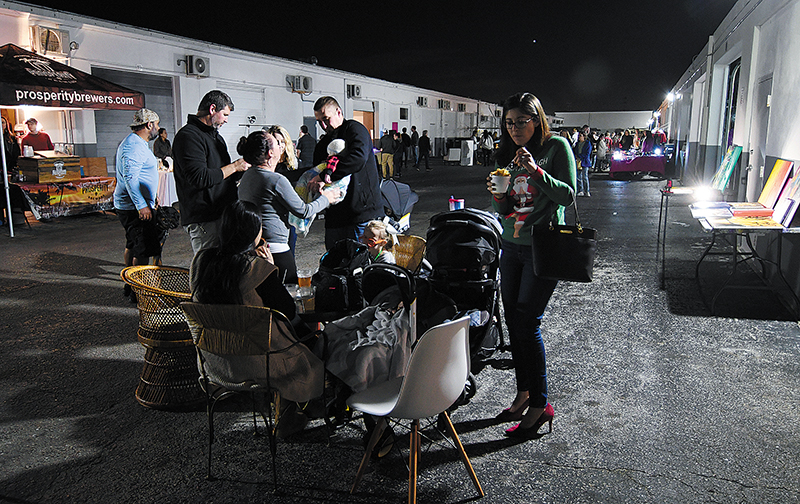 While those arts districts are flourishing and infusing their cities with dynamism and creativity, Boca Raton could claim nothing similar — until now.

ROC Urban is coming into its own and crackling with energy.

The two double rows of warehouse buildings, tucked within a warehouse district on both sides of Northwest First Avenue just north of Spanish River Boulevard and west of Dixie Highway, have become home to creative entrepreneurs.

While traditional warehouse tenants, such as a roofing company, are still there, they are gradually giving way to a co-working space, craft brewery, artists, a jewelry designer, a custom furniture designer and others.

“I saw there is something great going on in Wynwood and FAT Village,” said Amber Tollefson, co-founder of the Flamingo House collaborative work space. “There wasn’t anything in our backyard. We saw an opportunity.”

So did Mark Spillane, who bought the 1970s flex warehouse buildings four years ago. He renovated them, using reclaimed wood on interior walls, metal and LED lighting to create an urban look.

“In came the young crowd,” he said. “They found me in droves quickly.”

Among his first new tenants were Tollefson and Flamingo House co-founder Nichole Thomson, who rent their space to an eclectic group of their own tenants. Word spread. More creatives were drawn to the warehouse bays.

That is just what Spillane, whose Eire Cos. owns about 20 buildings from Lake Worth to Fort Lauderdale, hoped for.

“There is a substantial art community” in Boca Raton, he said. “A lot of fabulous stuff is going on. We’ve decided to go with that. We are supportive. It is a fun environment.”

It has also been good for his business and he wants to do other similar redevelopments.

Spillane and ROC Urban tenants give a lot of credit for the warehouse transformation to Tollefson, who is brimming with thoughts on how to enhance ROC Urban.

“Flamingo House has been a leader for us,” Spillane said. “They have done a great job with ideas.”

One of them was to create the monthly Art Walk ROC Urban during the winter season.

At the Dec. 21 Art Walk, singer and guitarist Josh René played before an attentive audience. Servers at Prosperity Brewers handed out glasses of craft beer. The scent of barbecue wafted in the air.

The event, hosted by Flamingo House, allows ROC Urban tenants to display and sell their paintings, jewelry and other works. Other creatives who work or display elsewhere are welcome, and all see the Art Walk as a way to get the word out and build their customer base.

It’s also an opportunity to network and grow the creative community in the city.

Visitors could see art and other offerings along both sides of the alley that runs between two rows of warehouses. 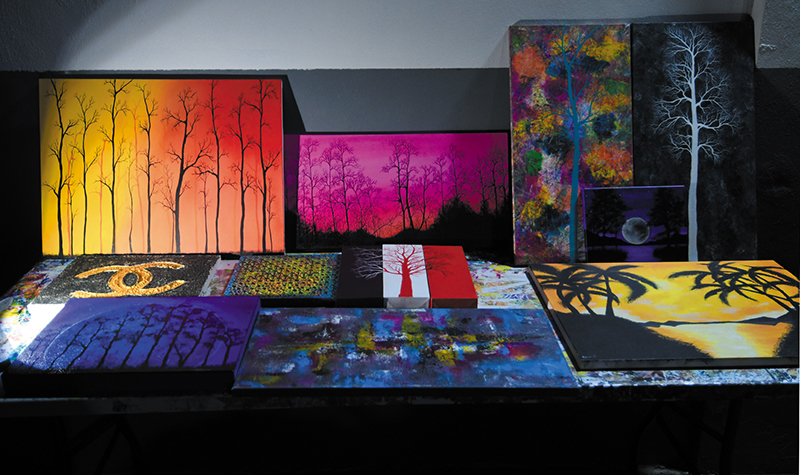 The art of Omar Sader of Pompano Beach is on display during the December Art Walk. The next Art Walk is set for 6-9 p.m. Feb. 15.

Ellie Vail, who moved into ROC Urban three years ago, displayed the jewelry she designs there.

“There is nowhere else I would like to be,” she said. “There are no other spaces like this in Boca.”

A former personal stylist at Saks Fifth Avenue on Worth Avenue in Palm Beach, Vail had clients such as Céline Dion, Ethel Kennedy and Patti Scialfa, Bruce Springsteen’s wife.

Wanting to try something new, Vail took a jewelry class after work. Soon she was designing  jewelry and offering it on the e-commerce site Etsy. And customers were buying.

She had a new calling, but needed an affordable place to work. ROC Urban fit the bill.

Her business is taking off. Her jewelry is now sold in about 250 boutiques and small department stores in the U.S., Australia and Singapore, she said. A big break came last year when Nordstrom began selling her creations.

“I hope to grow bigger, but I am definitely happy with where I am at,” she said.

Christina Wexler’s Bay38 workshop and showroom were open during Art Walk, allowing visitors to see some of her custom furniture. She repurposes old pieces, such as transforming a 1920s Victrola into a bar, and a nine-drawer dresser into a settee and storage area that can serve as a reading nook.

For Art Walk, she also offered gift items to those who needed to finish their holiday shopping. They included holiday napkins and ornaments, fair trade purses, woven clutch bags and trinket trays.

Wexler, who moved into ROC Urban in June, learned about the affordable warehouses from her friends Tollefson and Thomson.

“I constantly get calls from other artists saying, ‘Do they have space?’” she said. “It is definitely becoming a creative hub for people like me.” 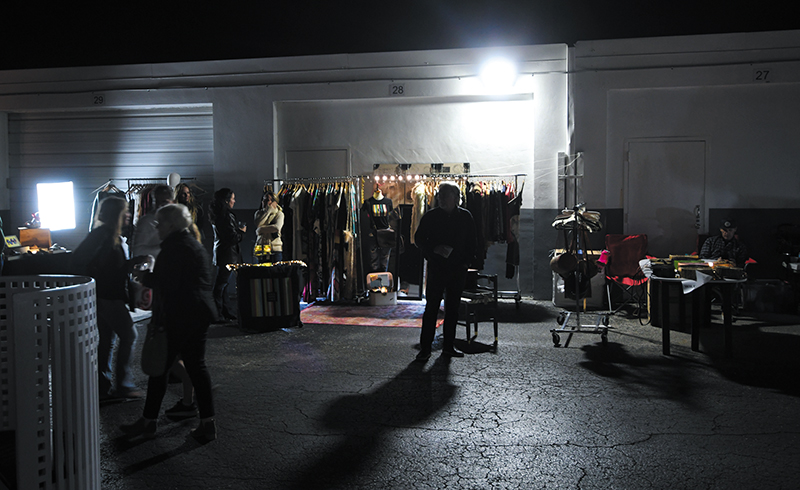 Customers check out clothing and other items for sale at ROC Urban during Art Walk, held the third Friday of each month.

Nearby, Melissa Staskowski, the style curator of All Things Vintage, took advantage of Art Walk to set up a pop-up and sell vintage clothing.

Without that pop-up, people would be able to see what she is selling only by looking on Instagram and Etsy.

“We think this is the future,” she said. “It is a great addition to online.”

Dave Spindell became a Flamingo House tenant two weeks before Art Walk. Customers can text photos of their pets to him, and he superimposes the images on magnets.

His company, Magnetic Pet Pictures, is the most recent of his entrepreneurial ventures, Spindell said.

“I retired and wanted to do something fun,” he said. 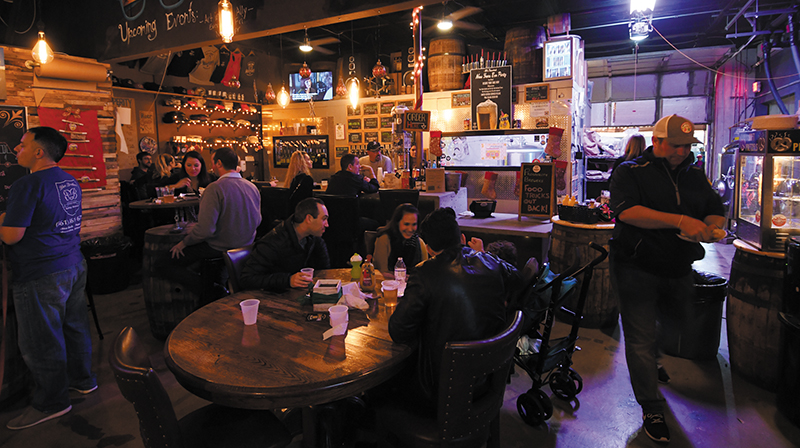 Patrons fill Prosperity Brewers at ROC Urban, a warehouse district in Boca Raton. The craft brewery opened in March. City Councilwoman Andrea O’Rourke calls the arts district  ‘an aspect we haven’t had in our community before.’ Photos by Jim Rassol/The Coastal Star

Prosperity Brewers, co-founded by Ken Gross and Dominick Peri, was jammed with customers on the night of Art Walk. They were greeted by Gross’ bulldog, Tank, his company’s mascot, who mingled with the crowd.

“It was a passion play,” Gross said of his decision to leave the software business and open a brewery. “I love craft beer. I love the process.”

He knew he wanted to be in eastern Boca Raton and in a warehouse area to avoid high rents. ROC Urban was what he was looking for.

“We were excited about the opportunity of ROC Urban being a mini-Wynwood,” he said.

It wasn’t when he opened in March, but that has changed rapidly, he said.

“With [Flamingo House] and us being here, we think we have helped create that vibe,” he said.

Finding customers has not been a problem even though many people may not know ROC Urban exists, he said.

“In the brewery business, the tasting room is a destination,” he said. “People will find you.”

He is building his customer base through social media, and by holding nightly events such as pint and slice on Mondays and trivia on Tuesdays. He plans to add monthly events tied to things such as the Super Bowl and Tank’s birthday.

The business is growing rapidly. Prosperity’s craft beer is now sold in about 25 Palm Beach and Broward county restaurants, and Gross hopes to be in 150 restaurants by the end of this year.

Tollefson, a former ESPN editor and Fox Sports senior promotions producer and editor, was working out of a home office after leaving those jobs. But the distractions of working at home propelled her to seek out a better arrangement.

Co-working intrigued her. She and Thomson wanted to create a collaborative space with a “creative vibe, a very work-life balance vibe. We wanted it to be industrial, near a brewery, a bit gritty, industrial chic.”

Her tenants can rent a virtual office with a mailing address, or workspaces by the day, Monday through Friday or 24/7. They can share space with others or have a closed-door office and can have access to a conference room and studio.

Her tenants include attorneys who cater to the tech community, an interior designer, an executive coach, artists and Web developers.

Flamingo House is nearly full, but there’s room for a few more tenants.

“We are seeking other flamingos to flock this way,” Tollefson said.

“I am super excited about it,” she said. “It is an aspect we haven’t had in our community before. In response to people who say there is nothing to do in Boca, we do: We have this great, emerging warehouse district.”