Buckets of money are flowing into the Boca Raton municipal races for the March 11 elections from two main groups: development and public safety.

Ten candidates raised $364,795, as of Feb. 7, the last reporting deadline before The Coastal Star went to press. The city has three open seats: mayor and two council members. Lawyer Scott Singer won a third council opening when no one filed to run against him. He raised $54,901.

The biggest money raiser was Susan Haynie, the deputy mayor who is running for mayor. Her campaign took in $109,131 for a part-time job that pays $9,000 (plus a $5,400 car allowance). More than 40 percent of her contributions came from development-related interests: real estate, developer, construction, attorney, architect or property management.

Haynie, who is running on her leadership and traffic-engineering experience, says it takes that kind of money to reach the 87,000 residents who live in Boca Raton with mailers and TV ads.

“The city is moving in the right direction,” said the 41-year resident.

Development lawyer Charles Siemon, who donated $500 to her campaign, said she is the “logical next mayor. She understands the issues.” He represents the planned Archstone Palmetto Park apartment complex that recently won its appeal of a court decision that sided with a neighborhood group and would have required a city referendum on the project’s approval.

George Elmore, founder and president of Hardrives Inc., said he donated $250 to Haynie based on her experience. “She’s the best one to keep the city moving forward. Not like in Delray where they are tearing it apart.” Hardrives is a countywide paving contractor based in Delray Beach.

Haynie’s opponent, City Councilman Anthony Majhess, raised $74,494. He received  $9,685, or 13 percent of his total, from development-related contributors. He also received more than 150 contributions from firefighters, police officers and their unions. He is a driver/engineer for Palm Beach County Fire Rescue.

He said he can remain impartial in September when the city’s public safety contracts come up for approval, because “it is my duty, and I’m a county firefighter, not a city one.” He also notes that he voted twice to take back $3.8 million from police and firefighter pensions.

Jess Santamaria, a county commissioner who is term-limited, gave $500 to Majhess’ campaign. They are both members of the Metropolitan Planning Organization and often sit next to each other. Haynie chairs the MPO.

“Anthony Majhess assured me he would withdraw the city from the suit against the County Commission and support the inspector general,” Santamaria said. When Santamaria ran for county commission in 2007, he ran on an anti-corruption platform.

Fourteen cities remain in the lawsuit against the county for requiring the inspector general, which they see as an unfunded mandate.

If Majhess wins the mayoral contest, he still would need two more council votes to change the city’s legal strategy.

Al Zucaro, another Majhess backer who donated $200, said he likes the careful and deliberate manner Majhess has shown at the council meetings.

“I feel he would manage the unbridled growth that the other council members seem to favor,” said Zucaro, a former West Palm Beach city commissioner who now lives in Golden Harbour, next to Majhess’ Golden Triangle neighborhood.

Majhess said he is for controlled growth to maintain the quality of life in Boca Raton. He does not want to create an urban center.

County Commissioner Steven Abrams said he has to work with all elected officials in his district and was not endorsing either candidate. As  mayor of Boca Raton, he served many years with Haynie on the council.

“I think she’s worked hard and deserves a promotion to the mayor’s seat,” Abrams said.

In a debate Feb. 4 Haynie and Majhess distinguished the differences between them.

Haynie implored voters to let her take her experience into the mayor’s office.

“When you’re on the wrong end of a 4-1 vote it means that you are not a consensus builder, that you have the inability to bring forward your ideas and your issues and get buy-in from the rest of the body,” she said.Haynie also said the mayor’s demeanor sets the tone for how the city is perceived.

Majhess said his stands on issues are based on easy-to-verify facts.

He said when he votes against colleagues he is not thinking about building a consensus. “It’s me being the herald and stomping my feet and shaking my fist at the sky trying to drum up not just your support but your attention to the matter,” Majhess said.

For Seat B, the candidates for this three-year council seat are:

Majhess had to resign his Seat D for his mayoral run. Challengers for the remaining year the term are:

Abrams said the election is the first in recent memory that the council has four openings.

“You’re going to have a fairly new cast of characters and certainly a new dynamic regardless of who wins,” he said. 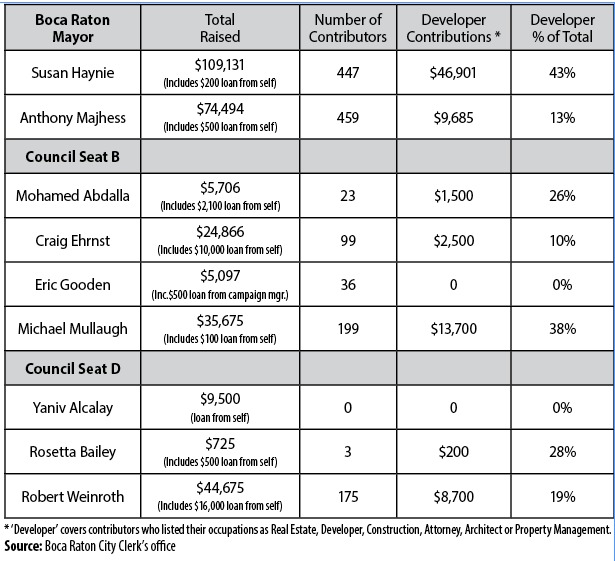