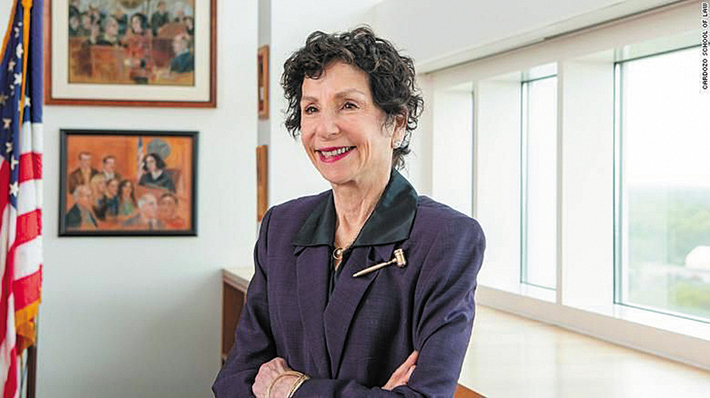 U.S. District Court Judge Sandra Feuerstein, 75, was struck and killed April 9 by a car while walking on the sidewalk along State Road A1A near Spanish River Boulevard in Boca Raton. Photo provided by Cordozo School of Law

A 23-year-old North Lauderdale woman has been charged in a fatal hit-and-run crash along North Ocean Boulevard in Boca Raton that claimed the life of a New York federal judge.
Nastasia Snape was driving northbound in a red Honda when she crossed the southbound lanes and continued onto the sidewalk near the Spanish River Boulevard intersection, striking Sandra Feuerstein at 10:09 a.m. April 9, according to the arrest report and a release by the Boca Raton Police Department.
Feuerstein, 75, who was nominated to the federal bench in 2003 by President George W. Bush, later died at Delray Medical Center.
Snape drove off at a high speed, striking a 5-year-old boy as he was crossing Ocean Boulevard in the crosswalk at Spanish River Boulevard, the release said. The boy suffered non-life-threatening injuries and was released from Delray Medical Center, according to Boca Raton police.
Snape’s vehicle crashed at the intersection of Southeast 10th Street and Southeast Sixth Avenue in Delray Beach.
A Delray Beach police officer on the scene said Snape at first appeared to be unconscious, but then began to convulse and have seizure-like movements.
She later got out of the car and told the officer she was OK. Once inside an ambulance, she screamed and fought with medics, stating she was “Harry Potter.” Medics administered the anesthetic Ketamine to calm her, the arrest report states.
Among her possessions were containers labeled “THC Cannabis” and a synthetic drug called “T salts,” which the arrest report states is known to cause excited delirium.
Snape, whose last name is the same as Severus Snape, a prominent character in the Harry Potter books, was charged with vehicular homicide, leaving the scene of a crash involving death and leaving the scene of a crash involving injury. She has pleaded not guilty.
As of April 27, Snape remained in the Palm Beach County jail. Bond was set at $20,000 for each of the three counts.
Her case was reassigned to mental health court on April 13 after Snape’s attorney informed the court that her family had disclosed her behavior before her arrest was “consistent with some form of mental illness.”
Snape was to undergo a mental health evaluation to determine if she is competent to proceed with the legal case.
Efforts to reached Feuerstein’s two sons, Adam and Seth, and a lawyer described in her obituary as a longtime companion were unsuccessful.
But in an email to Newsday, Adam Feuerstein said his mother was in Florida visiting friends and he and his brother believed she was on a morning walk when she was struck. She had no connection to the 5-year-old boy, he said.
She was “everything a child could want from a mother,” Adam Feuerstein wrote.
Judge Feuerstein served on the U.S. District Court for the Eastern District of New York. She assumed senior status in 2015.
News of her death deeply saddened members of New York’s legal community.
“Judge Feuerstein was a treasured member of our Eastern District bench,” District Court Executive Eugene Corcoran said in a statement. “Her eccentric style and warm personality lit up the courtroom. She will be missed by her colleagues and litigants alike.”
“She was a steadfast supporter of the (Suffolk County) Women’s Bar Association as well as dedicating her life to public service,” attorney Shari Sugarman, of Deer Park on Long Island, told The Coastal Star.
“She was just a wonderful woman,” Sugarman said. “She is very well respected and very well known in the community.”
With her death, “we lost a voice for women and children.”
Feuerstein was a New York public school teacher before attending Yeshiva University’s Cardozo School of Law.
Prior to her appointment to the federal bench, Feuerstein served as a Nassau County District Court Judge and as a justice on the New York Supreme Court.
She oversaw many high-profile criminal cases and lawsuits, including those of people convicted of joining al-Qaida and of sex trafficking ring leaders, according to the Cardozo School of Law.
Her mother, Annette Elstein, was an immigration judge. They are believed to be the first mother-daughter judges in the country, the law school said.