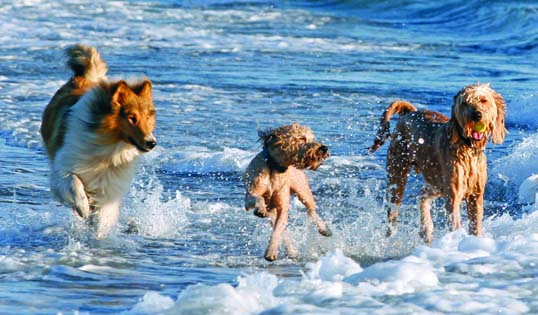 A trio of dogs enjoys the surf at Spanish River Park.

It’s 7:30 a.m. on a Saturday, and Vince Jacobs is watching as his soft-coated wheaten terriers race down the beach, kicking up sand and dodging the surf.
To the south, Donald Snider’s collie romps with another pooch. Nearby, a fourth dog digs gleefully, his furry coat frosted with sand.
Spanish River Park has gone to the dogs. And many Boca Raton residents and city officials couldn’t be happier.
“I love it. The dogs love it. They get to run in the wide open,” said Jacobs, 56, a Boca Raton resident who began using Boca Raton’s “dog beach” as soon it as opened a year ago. “I’ve never seen a fight or a problem out here. It’s cheap entertainment.”
The city’s dog beach opened in December 2013 and has been going strong ever since.
“The dog beach has been successful beyond all expectations,” said J.D. Varney, Boca Raton’s recreation services superintendent. “The conduct of the patrons has been the most significant factor contributing to the success of the dog beach. They have been respectful of each other and cooperative with the park rangers.”
Residents pay $30 per dog for an annual pass to use the dog beach. Nonresidents must pay $165 for an annual pass. Weekend passes are $10 for both residents and nonresidents.
According to Varney, the dog beach has generated about $52,000 in revenue from December 2013 to September 2014.  The city sold 1,381 annual resident passes, seven annual nonresident passes and 938 weekend passes.
Jacobs bought two annual passes for his dogs and rarely misses a weekend. He wears his dog beach pass around his neck so it’s visible to park rangers, cleans up after his pets and stays on the stretch of beach between lifeguard stands 18 and 20, designated for dogs. On a busy day, there may be as many as 40 canines, he said.
Varney credits the diligence of the park rangers for making the dog beach operate so smoothly.
“The park rangers have been thorough about enforcing the rules. They make sure everyone has a permit and is following the rules,” Varney said. “The people have been marvelous.”
Since the dog beach opened, there have only been four instances of dog owners not cleaning up after their pets, and three dog bites, Varney said.
Resident Donald Snider, 71, said his 1-year-old collie, Tigger, loves to run along the beach. And he loves to watch.
“I think it’s a great, great idea. Dogs love it, and they get to exercise, then go home and sleep like a dead dog,” Snider said, laughing.
Lisa Huffman and her husband, Eric Hartmann, both 43, their two children and their golden doodle, Jesse, love their dog day excursions.
“When we don’t bring Jesse here, he digs holes in our yard,” Lisa Huffman said. “He loves to go in the water.”
Huffman’s stepdaughter Sydney, 9, swims with Jesse when the water is warm. Otherwise she just plays with him on the beach. Both get coated with sand, but they rinse off in nearby showers.
“Stay away from the paws,” Sydney warned giggling. Her dad got scratched when Jesse paddled too hard, she said.
City resident Shelley Griffith, 43, said her German shepherd, Storm, gets excited as soon as they cross the bridge over the Intracoastal Waterway.
“She knows,” said the Boca Raton firefighter, who brings Storm as often as she can. “I love it.”
Said fifth-grader Liam Meadows, 10, who came to the dog beach with his mom, his brother and his dog, Bailey, “The cool part about it is that you never know what kind of dogs you are going to see.”