The Innovation and Education Center, part of a $130 million performing arts complex planned for Boca Raton’s Mizner Park, would include a rooftop terrace, two studios, other performance space and headquarters for the complex. Renderings provided

The Boca Raton Arts District Exploratory Corp. is refining its plans as the cultural arts group and city officials work to finalize a deal that would allow a $130 million performing arts complex to be built on city-owned land in Mizner Park.
The most recent renderings for the proposed Boca Raton Center for Arts and Innovation, released on March 22, highlight the versatility of its theaters to accommodate any type of performance or other events.
They also point to the technical capabilities that will be built into the completely revamped amphitheater and other venues in the complex that could accommodate a total of 6,000 people, said center president Andrea Virgin.
There will be no fixed seating, walls, ceilings or floors. Instead, all these elements can be reconfigured to meet the needs of whatever they are used for.
The technologies take into account tech-savvy younger audiences by including video walls, LED projections and simulcasting, allowing performances in one space to be broadcast throughout the complex.
The coronavirus pandemic has informed the project, with attention paid to indoor air quality and filtration. Renewable energy technologies also are incorporated.
BRADEC officials and the City Council will next meet on April 11, Virgin said, when city staff will seek the council’s direction on the remaining matters that are being negotiated.
Virgin also expects that the council will hear an overview of deal terms that the two sides already have agreed on.
“Negotiations have been going very well,” she said.
City staff also has sounded upbeat over the last few months when the negotiations have been mentioned at meetings.
Under the deal that is in the works, the city and BRADEC, a 501(c)(3), would enter into a long-term ground lease of 3.6 acres of city land in Mizner Park.
BRADEC would construct the performing arts complex and finance its entire cost with donations from cultural arts supporters and corporations that have long wanted such a facility in the city. 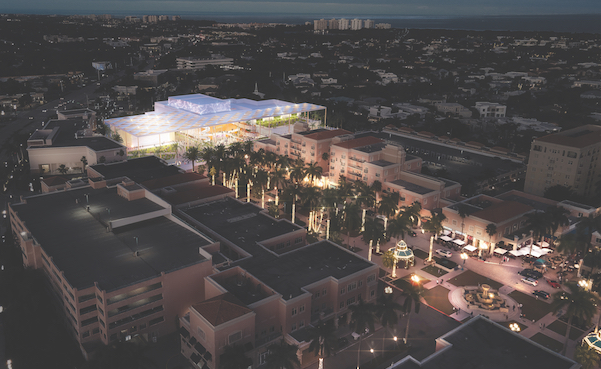 The planned performing arts complex (lighted at rear) would figure prominently at the northern end of Mizner Park, to the east of the Boca Raton Museum of Art.