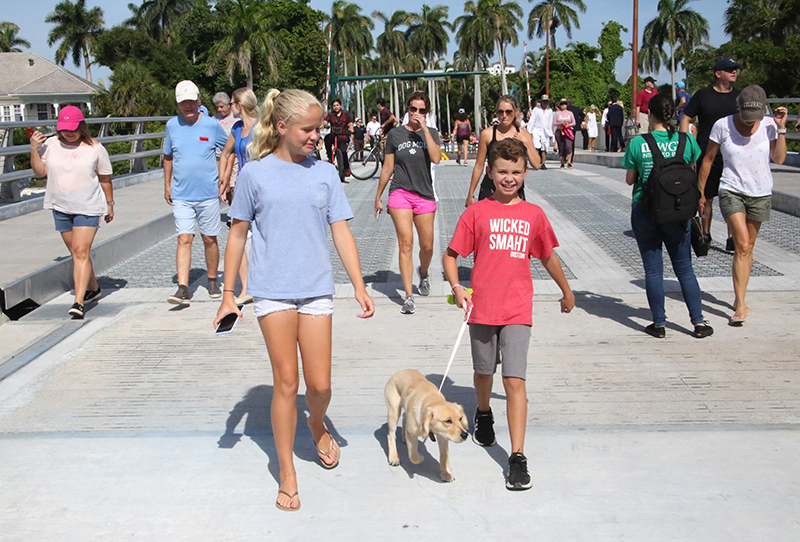 Grace Gensheimer and Brandon Martindale walk Bella, a 6-month-old mini golden, as the first group of pedestrians crosses the Camino Real bridge when it reopened to land traffic Aug. 6 after a ribbon-cutting ceremony. Motor vehicles were allowed to cross soon after. Photos by Tim Stepien/The Coastal Star

Traffic between the barrier island and the mainland is back to normal after unexpected work on the Camino Real bridge added an agonizing four extra months to a planned 12-month restoration.

“This is a day I was wondering would ever come,” said County Commissioner Robert Weinroth, presiding over an Aug. 6 ribbon-cutting for the $11 million project.

The bridge, Weinroth noted, is 80 years old and required special care. “If you know anything about restoring things, it always takes a little longer to restore than to build,” he said.

The ceremony started slightly late as the bridge made its regularly scheduled 10 a.m. opening. As soon as the bridge lowered and the gates went back up, bicyclist Christine Schilling Boccia led a crowd from the island side over the new span.

Boccia, who lives on the island, grew up in the Royal Palm Yacht and Racquet Club and has been a member of the Boca Raton Resort and Club “since birth,” said she got to the bridge early to become the first crosser even before the ribbon was cut.

The construction delays “just like became a real hassle,” she said, listing three family weddings and the birth of a grandbaby that necessitated time-consuming detours between her home and the resort, The Addison restaurant and West Boca Medical Center.

Weinroth, who led onlookers on foot eastward across the bridge, noted that the bridge tender’s structure was relocated to the north side of the span from the south. “It’s now more historically in keeping with the way the bridge was originally, back in 1939,” he said.

Besides waiting for barricades to come down, eastbound motorists on Camino Real had to maneuver around a Shamrock Tree Co. crew trimming the boulevard’s royal palm trees.

Helene Parsons, who lives in the Berkeley Square condominiums on State Road A1A and works at The Addison, took honors for driving the first vehicle across the reopened bridge. The 16-month detour had almost tripled her customary seven-minute commute to her job.

“I’m so excited,” she shouted out the window as her white Toyota convertible accelerated.

The bridge was closed to land traffic on April 12, 2018. Crews started working nights in mid-May to meet an anticipated June 20 reopening. But contractor Kiewit Construction missed that target and then a less definite goal “toward the end of July,” Palm Beach County officials said. As recently as July 31, Deputy County Engineer Tanya McConnell said she was not able to give a date for the reopening.

“We are in the latter stages of construction, but that is as much as I am able to say at this time,” McConnell said.

“We wanted to do it right, and we are satisfied we got it right, and the FDOT has been here and given us two thumbs-up,” Weinroth said.

The new bridge has a similar architectural design, the same clearance height and a similar railing to the old span. The two-lane drawbridge handled about 7,600 vehicles a day before it was closed, about half the traffic on the four-lane Palmetto Park Road bridge, county figures show.

Architect Addison Mizner designed Camino Real in the 1920s to connect the railroad station to the resort. In 1929 developer Clarence Geist put a temporary swing bridge at the end of the road to cross the Intracoastal Waterway. The federal Public Works Administration built the permanent drawbridge 10 years later.

County engineers once planned to demolish the bridge and replace it with a $44 million span but learned during the permitting process that it was protected as part of the county’s Camino Real Road and Bridge Historic District. 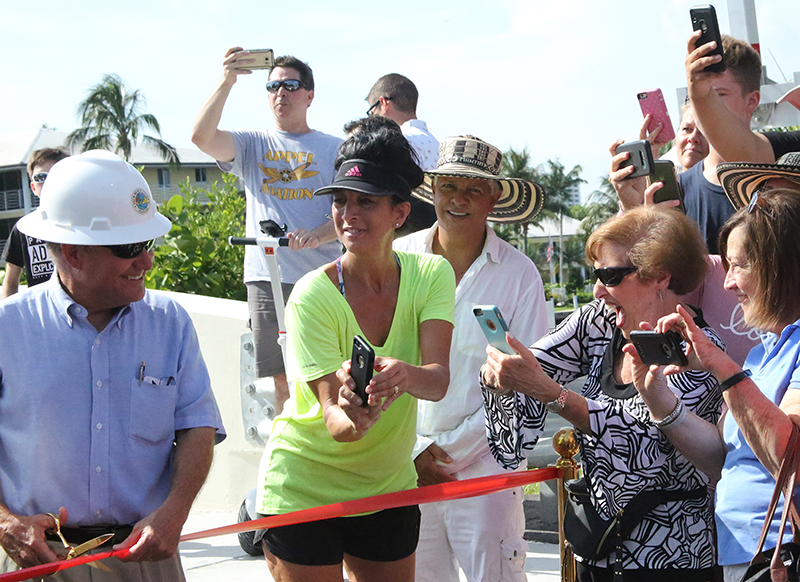 Residents on both sides of the bridge were eager to record the event with their smartphones.