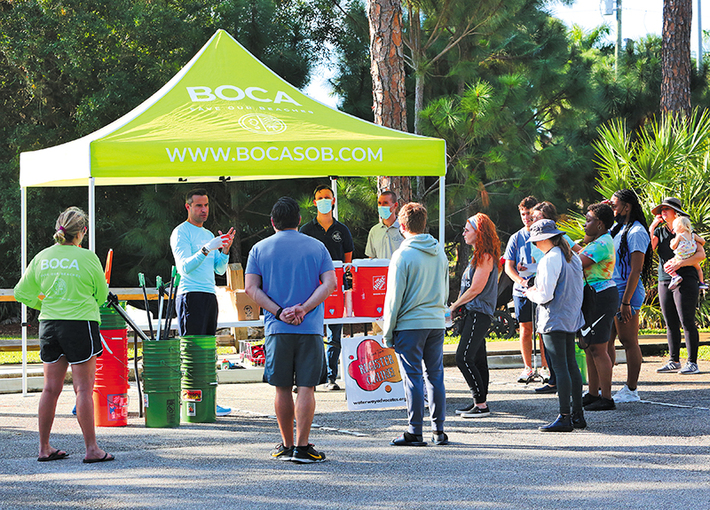 Boca Raton City Council member Andy Thomson addresses a group of volunteers at University Woodlands Park before they head out to pick up trash on Dec. 11.

Boca Raton City Council member Andy Thomson launched 2021 with a resolution to run all 475 miles of the city’s streets, picking up litter along the way.
In 2022, “I’m going to do it all over again,” he said.
Thomson, 39, confesses he’s not a big fan of running. And in late December, as the former punter on Georgia Tech’s football team rushed to complete his mission, he admitted his knees were sore.
But he’s going to press on because his “Run the City” initiative provided benefits he didn’t expect.
“I’ve gotten to know our city better,” he said. “What each neighborhood is like and what they could use, what they need.”
Beyond that, the effort yielded a cleaner, safer city. He and nearly 500 volunteers who joined his cause picked up nearly 1,300 pounds of trash. The potholes, broken sidewalks and other safety issues he spotted and reported have been fixed by city or county crews.
“The best part is the volunteers,” Thomson said. “I didn’t anticipate there would be a lot of involvement or interest. But there was a lot.”
The long list of nonprofits and other groups that helped includes Boca Raton Regional Hospital, Junior League of Boca Raton, Boca Raton Innovation Campus, Riviera Civic Association, Spanish River High School cross-country teams, Addison Mizner elementary school PTA and Christ Community Church.
Also at times, some of his five children accompanied him.
In the new year Thomson will tweak his system a bit. He’ll run major arteries early in the morning since few pedestrians walk along them and there are fewer opportunities for interaction.
He’ll save neighborhoods for later in the day and announce in advance where he will be so residents can talk with him about issues they’d like the city to resolve.
“It has helped me immensely” as an elected official, he said. “I have met so many people I probably would never have met as a result of being in their neighborhood.”
The project is reminiscent of “Walkin’ Lawton” Chiles’ 1970 campaign for U.S. Senate, when the Lakeland politician walked 1,003 miles from Pensacola to Key West to meet everyday Floridians and promote his candidacy. He won the Senate seat and later served as Florida’s governor.
Thomson’s effort no longer is a solitary one. Some volunteers have been inspired to conduct independent cleanups.
“Once they start doing this, they realize your eyes can’t not see the litter that’s out there. You feel compelled to do something about it,” he said.
As 2021 drew to a close, Thomson was joined by volunteers from Boca Save our Beaches and the environmental organization Waterway Advocates to clean up neighborhoods near University Woodlands Park at 2501 St. Andrews Blvd.
“We are super-excited to work partner with (Thomson),” said Boca Save our Beaches founder Jessica Gray. “All trash will eventually lead to the ocean,” endangering wildlife.
About 18 volunteers showed up for the Dec. 11 cleanup, including Florida Atlantic University students Makayla Williams and Manoucheca Pierre, who could earn community service credit for participating.
“I felt I had to do something,” Williams said. 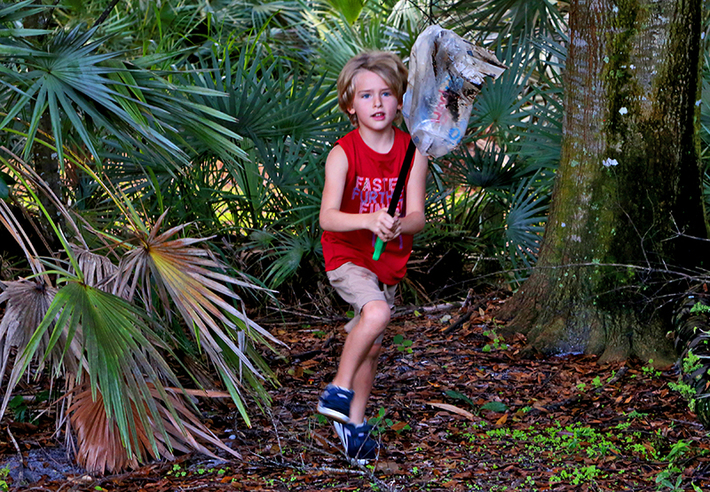 Dylan Uttenreither, a 10th-grader at West Boca Raton Community High School, brought along his parents, Jennifer and Scott.
“We love to help,” Jennifer Uttenreither said.
Ellen Gray, who participates in beach cleanups with Boca Save our Beaches, brought her children, Jackson, 6, Julia 3, and Jane, 1, with the intention of “teaching our kids good things.”
Jackson, who proved to be an expert with a trash-grabbing device, amassed a big haul after about 15 minutes of work — 14.5 pounds.
“I am so pleased,” Gray said of her son’s efforts.
In all, the volunteers collected 42.3 pounds of trash, including a car grille, styrofoam, old tennis balls, plastic water bottles and beer cans.
“Even in a city as beautiful as Boca, this stuff is out there,” Thomson said as he thanked the group. “The best part is, you are demonstrating you care about our city.”