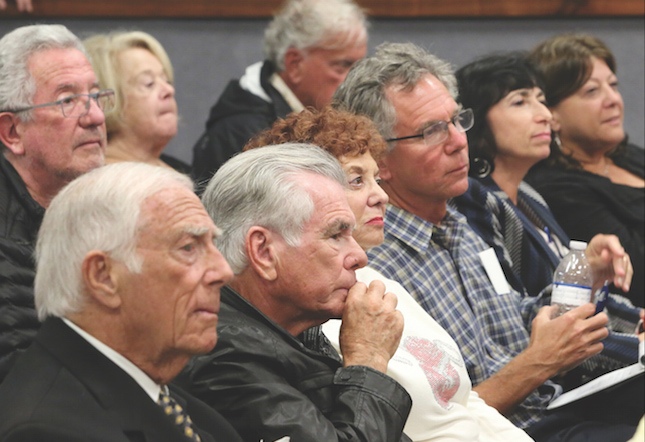 Audience members listen before the Boca Council makes its final vote to reject the variance for the duplex. Tim Stepien/The Coastal Star

Living up to promises they gave voters and concerned residents for years, Boca Raton City Council members decided a four-story duplex could not be built on the beach east of State Road A1A between Spanish River Park and Ocean Strand.

The Feb. 26 vote denying a variance to build east of the state’s Coastal Construction Control Line was a relief to observers who packed the council meeting and filled 50 or so seats in an adjacent overflow room.

At least 17 residents spoke during the public comment portion of the hearing; none supported the duplex.

Attorney Robert Sweetapple, who represented the landowner, showed a video of then-council member and now Mayor Scott Singer standing on a dune and declaring he could not support plans for a house on the beach. Sweetapple also had copies of emails that council members Andrea O’Rourke and Monica Mayotte had sent constituents saying they too would vote against variances for construction seaward of the CCCL.

The three rebuffed Sweetapple’s suggestion that they were biased and should recuse themselves from the variance petition.

Brandon Schaad, Boca Raton’s director of development services, outlined six criteria the property at 2600 N. Ocean Blvd. would have to meet to win a variance, and then showed how it had failed to do so.

“In any case the applicant has not established any special condition that would justify such a large project with such demonstrated insensitivity to this natural environment,” Schaad said.

Under questioning by Sweetapple, Dr. Kirt Rusenko, Boca Raton’s marine conservationist, said he had written a report perhaps two years ago saying that more turtles nest in front of large beachfront condominiums than in front of unlit Red Reef Park.

“These buildings shade the beach from the sky-glow of the development inland, creating more desirable nesting habitat,” Rusenko wrote.

That report was similar to a study John Fletemeyer, who supervised sea turtle conservation in Delray Beach for 31 years, presented last month to Boca Raton’s Environmental Advisory Board that showed turtles nested less frequently behind undeveloped Atlantic Dunes Park on A1A than behind the condos north and south.

At the end of Sweetapple’s presentation, Singer quickly moved that the variance be denied.

“Based on the competent and substantial evidence I see in the record and at the hearing today, I find that the criteria have not been satisfied for a variance,” the mayor said.

The council’s denial followed a Jan. 10 recommendation by the Environmental Advisory Board that the variance be denied.

“Environmentally the Coastal Control Line is there for a reason, and it was put there for a good reason,” board Chairman Stephen Alley said then.

Council members caused an uproar when they gave a zoning variance in late 2015 for a four-story beachfront home two parcels south, at 2500 N. Ocean Blvd. The state Department of Environmental Protection issued a notice to proceed with that project, which still needs review by the EAB and another council vote.

Richard Caster and Brian Grossberg, doing business as 2600 N Ocean LLC, have a contract to purchase the property from New Jersey-based Grand Bank NA. Some residents in the audience said they believed, after looking at the property appraiser’s website, that the partnership bought the property for $100. But Sweetapple said Grand Bank had acquired the land in foreclosure and the price tag was in the millions.

An appraisal drawn up in response to city requests valued the parcel at $7.2 million.

Each side of the proposed duplex would have had a roof level with a pool, spa, fire pit and outdoor kitchen. Sweetapple said the building would have special glass facing the ocean that would transmit only 10 percent of interior light, below the city’s request for 15 percent, and have only 8 percent reflectivity.

Tom Tomasello, one-time general counsel for the state’s Department of Natural Resources and an expert witness for the developer, said city staff was making a big deal out of the fact that the proposal did not yet have a state permit, but said also that Boca Raton refused to provide a letter stating the project met city zoning and setback rules.

“I’ve never been in this situation before where a local government treats the Coastal Construction Control Line as a line of prohibition,” Tomasello said.

After the vote, Sweetapple said he would file documents in court asking a judge to review the proceeding, then file a lawsuit over Boca Raton taking the property from its owners.

“Dr. Rusenko actually proved our theory of the case. That’s why they didn’t call him,” Sweetapple said.