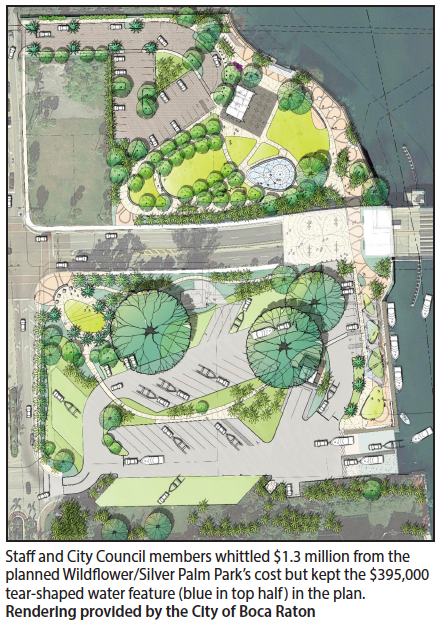 Downtown’s planned Wildflower/Silver Palm Park will have cheaper pavers and fewer trash bins, but City Council members looking to cut costs said they would find money to keep a $395,000 interactive water feature and a $556,000 restroom relocation on the blueprint.
A possible source of cash: the city’s imminent $65.75 million sale of its municipal golf course, Mayor Scott Singer said at the council’s April 26 workshop.
Jennifer Bistyga, the city’s coastal program manager, alerted council members two weeks earlier that construction estimates for the park, on the Intracoastal Waterway just west of the Palmetto Park Road bridge, had jumped to $10.3 million, or $2.5 million higher than the budgeted $8.8 million.
Negotiations with contractor Burkhardt to set up a “field office” at the city’s Municipal Services Complex instead of on-site, plus reductions in scope and profit trimmed $565,000, Bistyga reported.
Council members easily approved saving $433,000 through “value engineering changes” that Bistyga promised would not alter the look and feel of the project. Those revisions included the less expensive pavers, installing 10 garbage cans instead of 13 and seven recycling bins instead of 10, and keeping an existing entrance sign rather than ordering one engraved in stone.
At the April 26 meeting they also agreed to spend only $330,000 on landscaping, saving $203,700, and to install less expensive light poles and pocket $69,800, making the total cost roughly $9 million.
But they balked at city staff’s other cost-saving suggestions. And still to be decided is how much to spend on public art.
Deputy Mayor Andrea O’Rourke called the Wildflower project “an opportunity to provide an amenity of excellence” to residents.
“The city can handle the cost of creating a phenomenal destination,” she said.
Council member Andy Thomson was the only person on the virtual dais to favor leaving the park’s restroom where it is, squarely in the way of the planned connecting walkway, and other reductions.
“Two million dollars right now to add to our budget is a bridge too far,” he said.
But O’Rourke said the council had told constituents they would get certain park features via statements and a sign posted prominently at the site two years ago.
“Let’s move forward, let’s get our promise done,” she said.
The council will vote on the cost reductions May 11. Bistyga said the council’s decisions would also reduce the contingency fund needed for the project, but could not say immediately by how much. Construction work should take about a year, she said.
In other park business, the council authorized Bistyga to apply for a second grant from the Florida Inland Navigation District for the planned renovation of Lake Wyman and Rutherford parks. FIND typically awards grants in the fall.