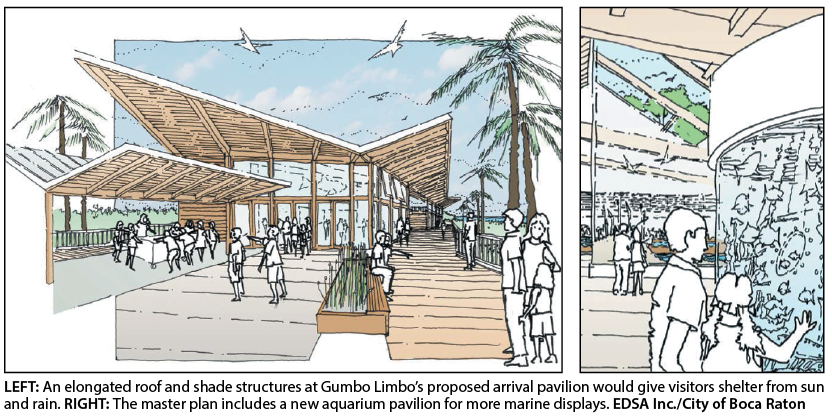 The Gumbo Limbo Nature Center would be replaced by a twice-as-big facility with sweeping cantilever roofs built over a ground-level parking garage in a proposal by waterfront parks consultant EDSA Inc.

EDSA’s Kona Gray said his design team brainstormed to combine a “porch concept” (“We know how welcoming a front porch is,” he said) and a “village concept” clustering the center’s education, conservation and research elements.

“The process is really kind of, I think it was pretty magical, because when we finished with it we realized that this is a very good start,” said Gray, who presented his plan to the Greater Boca Raton Beach & Park District on March 5.

The proposal calls for a winding entrance road going to the “arrival court” with “big steps” leading to the front porch. The popular, unpaved Ashley Trail would become a boardwalk, its butterfly garden bisected by a service road with a portion turned into a “running space” for children.

Other additions include a kayak launch on the Intracoastal Waterway at the southern end of the grounds and two more overlook piers extending into the waterway.

The enlarged buildings would feature sheltered and shaded structures for outdoor programming with a covered “event terrace” on the roof.

“Right now if it rains at the center everyone has to come inside,” Gray said. “There’s not a lot of covered area.”

“I think it’s fantastic. The parking [underneath] makes so much sense,” Commissioner Erin Wright said. “I love the idea of more nature-focused playgrounds … rather than the plastic type of playgrounds that we kind of have been having.”

“It’s a wonderful plan,” Rollins said. “It looks to me like a marvelous project.”

Michele Peel, president of the Friends of Gumbo Limbo, said the proposal “is definitely headed in the right direction.”

Visits to the nature center have pretty much doubled in the last decade, Peel said.

“Cruise ships are sending people, TripAdvisor ranks us as a top activity in the area, and locals bring their house guests and family here,” she said. “If we’re smart about our planning, it will be both easier to visit, and offer more interesting things to do.”

The city owns Gumbo Limbo, but the Beach & Park District pays for all its upkeep and capital improvements.

Gray said construction would take about 3½ years and be in three phases, so the center never has to close. He said he would return with cost estimates after some fine-tuning of the plan.