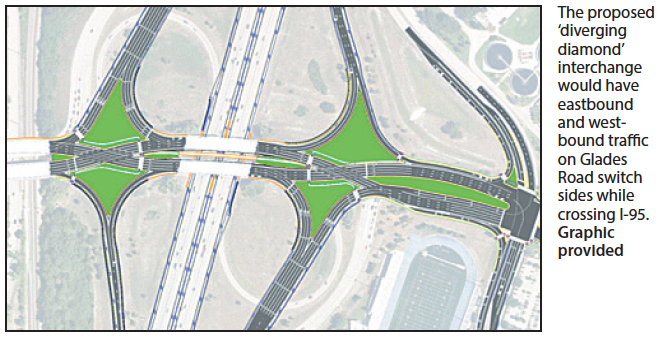 The next phase of Interstate 95 construction in south Palm Beach County will begin early next year, with the work covering the span from just south of Glades Road to south of Linton Boulevard.
The $148 million project includes the addition of two northbound and two southbound express lanes, and the complete redesign of the Glades Road interchange.
The Florida Department of Transportation is planning a “construction open house” to provide more information to the public in January at Boca Raton’s Spanish River Library, Andi Pacini, a spokeswoman for the project, told Boca Raton City Council members on Sept. 23. A firm date is not yet set.
The roadwork will take more than three years, with completion expected in 2023.
After the express lanes are added, I-95 will have four regular northbound and southbound lanes. Drivers will be able to use the express lanes for travel all the way south to Miami and north to Linton Boulevard.
Motorists will use SunPass to pay express lane tolls, which will vary depending on the time of day and congestion.
A date for construction to begin on the Glades Road interchange has not yet been set.
The contractor for the work, Prince Contracting, will use a new “diverging diamond” design for the interchange. The design already has been used for an interchange in Sarasota and two interchanges in Miami-Dade County.
Drivers should have no problem navigating the new design, officials told council members.
The portion of the interchange that runs east and west over I-95 will include a bicycle lane and a 10-foot-wide pedestrian walkway.
The project will begin as work wraps up on the stretch of I-95 running from just south of Glades Road to south of Southwest 10th Street in Deerfield Beach.