The waterfront restaurant chosen for downtown Boca Raton must compete in a popularity contest.
The city will ask restaurant developers this month to submit proposals to build on two acres of city-owned land immediately north of the Palmetto Park Road Bridge.
“It will be very exciting to have a waterfront restaurant, like all the other cities along the Intracoastal Waterway do,” Mayor Susan Whelchel said.
Boaters will have access to both the restaurant and Boca Raton’s redeveloping downtown.
“Not only can people eat in a wonderful restaurant, but they would be only a few steps from shops on Palmetto Park Road,” Whelchel said. “A waterfront restaurant will have a huge impact on creating our new pedestrian-friendly downtown.”
City officials say they want an affordable family restaurant.
“We’re looking for a restaurant that’s not low end and not high end,” Assistant City Manager George Brown said. “It’s to be a waterfront experience where boats can pull up and drop off. Dockage is possible.”
The competition to select a restaurant began April 2 when Marine Advisory Board chairman Gene Folden appeared before the Federation of Homeowner Associations to urge their support for the tropical outdoor dining concept created by Guanabanas, a popular Jupiter restaurant.
“Guanabanas has taken outdoor dining to the next level. Their concept is totally different,” Folden said. “They’ve captured the experience of being in the Bahamas or the Florida Keys.”
Guanabanas and two other restaurants responded in 2011 when the city requested informal ideas from anyone interested in building on the two-acre site of the former Wildflower restaurant that the city bought for $7.5 million in 2009.
“I like the location,” Guanabanas president Chad Van Boven repeated again last month. “We’re always looking for something on the water.”
Van Boven proposed in 2011 to build outdoor dining under Key West-style chickee huts for an experience that he described as Old Florida on the water. The proposal included clothing sales and a vendor providing kayak and paddleboard tours.
Guanabanas offered to pay the city $450,000 a year plus 7 percent of gross sales to lease the property.
But chickee huts lack air conditioning. “I want a restaurant that will be sustainable in the dead of summer,” Whelchel said.
Two restaurant developers connected to Houston’s steakhouse also expressed interest in 2011, proposing enclosed dining with smaller outdoor patios.
Folden scoffs at those proposals.
“If you want to have a good steak, there are plenty of other restaurants where you can go,” he said.
The city’s formal Request for Proposals this month is expected to attract many more restaurants before the City Council chooses a winner.
City officials are exploring whether to buy properties adjacent to the Wildflower site to create a larger waterfront promenade with boat dockage.
A waterfront residential property to the north, listed for $5.9 million, would allow space for docks. Two properties along Northeast Fifth Avenue would allow more vehicle parking.
The city already has a boat ramp on the south side of the bridge, at Silver Palm Park.
The mayor encouraged residents to investigate what West Palm Beach, Fort Lauderdale and other cities have done to open public access to their waterfronts and bring people downtown.
“We can look north and south to see what other cities have been able to accomplish,” Whelchel said.
Folden also urged members of the Federation of Homeowner Associations to check out the Deck 84 waterfront restaurant at the Atlantic Avenue Bridge in Delray Beach.
“Go up there to get an idea of what we could have,” he
said. 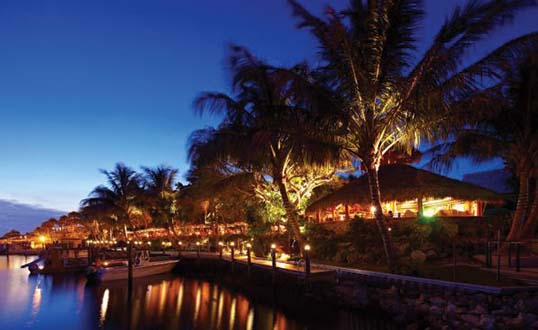 Guanabanas (above) is a popular waterfront nightspot in Jupiter. Deck 84 opened a couple of years ago at Atlantic Avenue and the Intracoastal Waterway in Delray Beach.
Courtesy photos