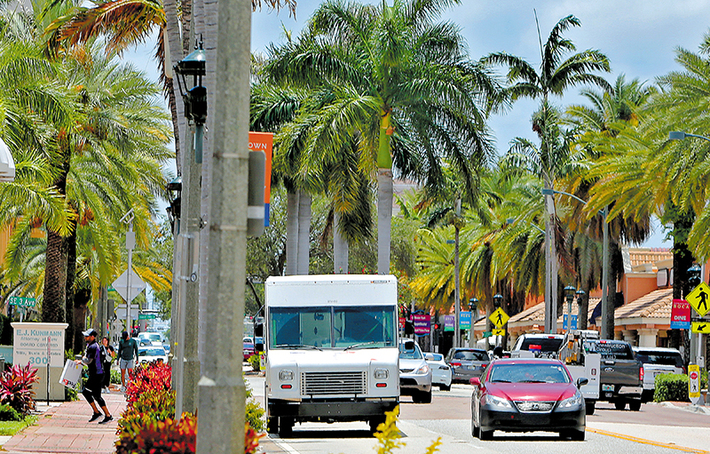 A FedEx driver leaves his truck along East Palmetto Park Road in Boca Raton as he delivers a package to a business. The city plans to redesign the road from Federal Highway to Fifth Avenue for better function. Tim Stepien/The Coastal Star

Boca Raton City Council members have voiced their support for Deputy Mayor Andrea O’Rourke’s campaign to improve a five-block section of East Palmetto Park Road.
After O’Rourke made a presentation at a May 9 meeting, her fellow council members backed her request to hire an urban planning consultant to evaluate the street span from Federal Highway to Northeast/Southeast Fifth Avenue and create a new street design.
But much remains up in the air. O’Rourke and other council members did not suggest specific changes and left it to City Manager Leif Ahnell to determine which consultant to hire and to specify the scope of the consultant’s work. Council members will review and potentially revise his plan.
But based on council member comments, the review could include pedestrian safety, controlling vehicle speeds and avoiding changes that would make it more difficult for barrier island residents to get to and from downtown.
Also still to be resolved is how to pay for the consultant and construction.
Downtown street improvements have long been a priority for O’Rourke. At last year’s City Council goal-setting session, other council members rejected her proposal to prioritize making street changes throughout the downtown. But they did agree to prioritize improvements to another section of Palmetto Park Road, east of the Intracoastal Waterway.
Since then, O’Rourke and land use attorney Ele Zachariades formed an ad hoc group that included prominent architects, engineers and a Florida Atlantic University urban planning professor to tackle how the five-block area west of the Intracoastal could be transformed.
The group held a visioning session on March 24 to gather input from city residents, who backed changes that included wider sidewalks, more shade trees and the addition of bicycle lanes and crosswalks, while eliminating on-street parking.
A second visioning session was planned in advance of this year’s goal-setting session on May 31-June 1. Instead, O’Rourke took her case directly to the City Council, asking for the consultant and a council-approved list of requirements the consultant would have to take into account.
Noting that this is her last year on the City Council because she is term-limited, O’Rourke said she wanted to get the project underway before she leaves office.
“I would just really like to see us finish what we started,” she said, referring to unrealized plans in 1982 and 2007 to create a new vision for downtown. “Complete the vision. Complete the dream and make this happen.”
People and companies are moving to South Florida, she noted. To compete with other cities trying to attract them, Boca Raton needs to provide a vibrant downtown that offers more than it does now, she said.
While she would prefer a more comprehensive revisioning, O’Rourke said her proposal is a good first step.
Her comments drew applause from the audience, which included members of the group she and Zachariades had recruited.
Speaking of dynamic cities such as San Francisco, architect Juan Caycedo said, “What we have is an opportunity to create one of those memorable places” and make Boca Raton unique.
Kelly Smallridge, president and CEO of the county’s Business Development Board, said improvements would help her persuade companies to move to Boca Raton.
“As you are creating the vision, I urge you to think bold,” she said.
Only one Beachside resident spoke at the meeting, but many have contacted council members urging that their concerns be considered before any changes are made.
While they favor an improved roadway, Beachside residents want to head off any traffic lane reductions that would add to their travel time on and off the barrier island and impede fire-rescue personnel and evacuations during hurricanes.
In an April interview with The Coastal Star, Emily Gentile, president of the Beach Condo Association of Boca Raton and Highland Beach, said Beachside residents are not being heard as city officials consider road upgrades.
Much has changed since the city last looked at a new vision for downtown in 2007, she said, including a large increase in the number of people living year-round on the barrier island.
Reducing the number of Palmetto Park Road travel lanes would increase traffic congestion and lead to bottlenecks on both that street and State Road A1A, she said.
“Removing travel lanes from East Palmetto Park Road is a ridiculous idea,” and one that no traffic expert would support, Gentile said.
Drivers spend as long as 20 minutes getting off the barrier island because of traffic congestion, and reducing lanes would exacerbate that problem, Gentile said. That also would create a major safety issue when a hurricane is approaching.
She advises city officials to add barrier island residents to the ad hoc group to ensure their needs are considered as planning moves ahead.
Highland Beach commissioners also are worried about any possibility of reducing lanes from four to two. “If in fact it ends up going through, I believe it would lead to a significant increase in traffic on Spanish River Boulevard because people would avoid Palmetto Park Road,” Mayor Doug Hillman said at a May commission meeting.
He and other commissioners agreed to closely monitor developments and any impact on Spanish River Boulevard, which is just south of the Highland Beach border with Boca Raton.
In other Boca Raton business, the council on May 10 approved charging a $500 fee for buildings undergoing a certification process to ensure they are safe.
The city, acting in response to the Surfside condo collapse last June that claimed 98 lives, launched its certification program in January.
It requires buildings that are 30 years old and taller than three stories to be inspected. The first notices that buildings must start the process went to 14 building owners in January and another 14 were set to go out by May 1. A total of 191 properties meet the criteria for certification.