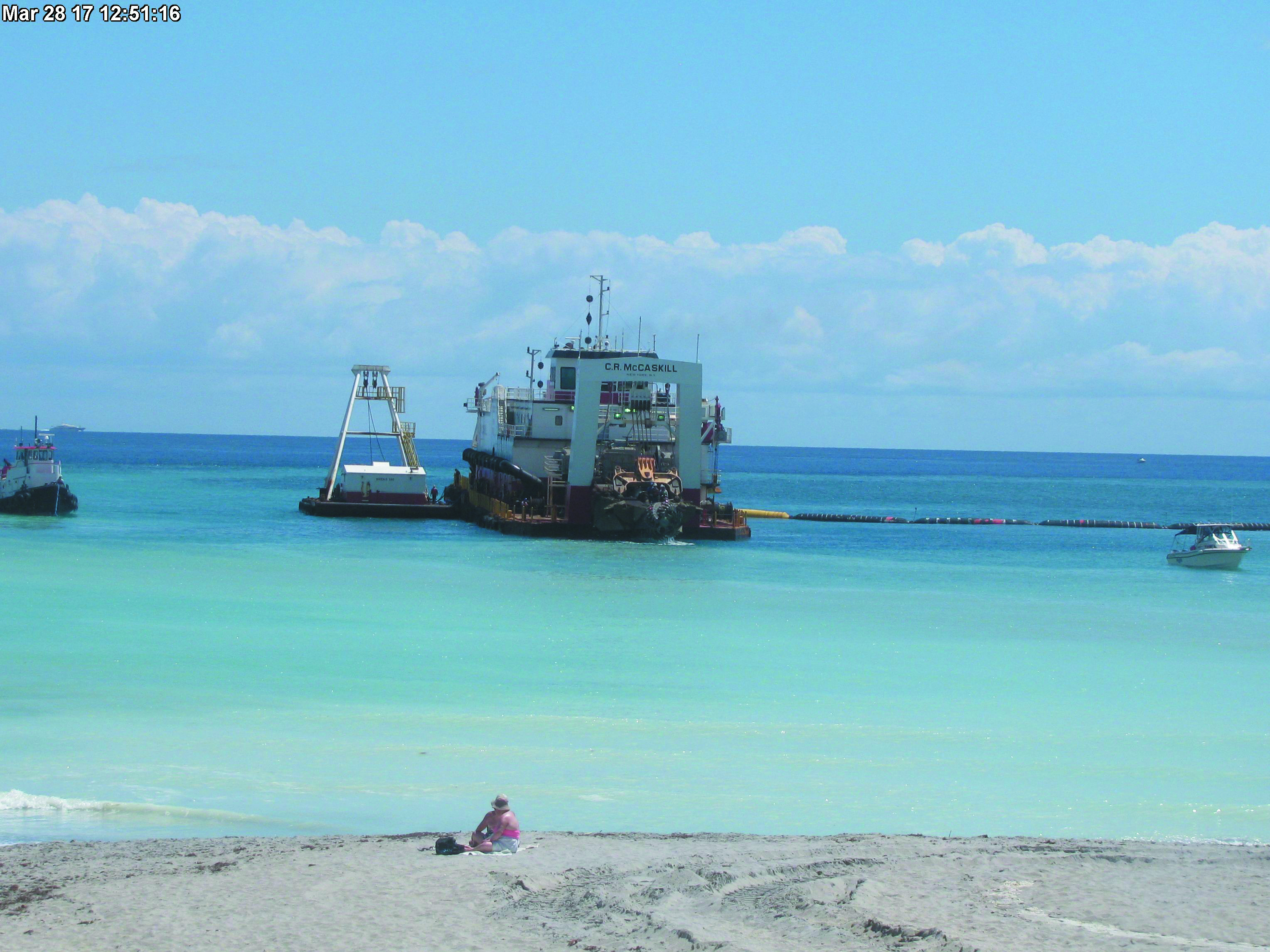 Contractor Weeks Marine pumps sand from the shoal just outside the Boca Raton Inlet on March 28. The shoal sand was placed on beaches south of the inlet. Photo by Palm Beach County

The city’s dredge contractor was asked to cut a 20-foot-deep channel through the ebb shoal just outside the Boca Raton Inlet that has been giving boaters fits since last summer.
But Weeks Marine Inc. was not going to remove as much sand as the city originally planned because of uncertainty over a legal challenge lodged by Hillsboro Beach, said Jennifer Bistyga, Boca Raton’s coastal program manager.
“Only a portion of the ebb shoal will be dredged,” she said. “I cannot stress enough that this is only in one small portion of the shoal.”
The contractor finished the renourishment of the central beach area from the inlet north to Red Reef Park before tackling the shoal problem. It moved 530,000 cubic yards of sand from borrow areas offshore to make a 1.45-mile stretch of the beach 170 feet wider.
The renourishment was interrupted in April 2016 by weather delays.
The city announced that Weeks Marine had finished the central beach project and was moving to work at the inlet March 18, a day after the state Department of Environmental Protection dismissed Hillsboro Beach’s amended challenge. The town just south of Deerfield Beach had failed a second time to demonstrate “substantial environmental interests,” the DEP rul
“The petition is devoid of any facts that exceed the general interests of the citizens of the town of Hillsboro [Beach], other than the economic interests that are not protected by this proceeding,” the department said.
But Hillsboro Beach filed a notice March 20 that it would contest the dismissal in the Tallahassee-based 1st District Court of Appeal.
A total of 80,000 cubic yards of sand from the shoal was to be placed on Boca Raton’s south beach, from the inlet south to the Deerfield Beach city limits. The DEP had given the city permission to move up to 100,000 cubic yards of sand south of the inlet and up to 80,000 cubic yards of sand north. Hillsboro Beach, which counts on the natural flow of sand south to help maintain its beaches, complained that no sand should go north.
“Hillsboro Beach does not object to the dredging, only to the placement of the material north of the inlet,” said Kenneth Oertel, that town’s Tallahassee-based environmental-law attorney.
Bistyga said the shoal sand would be moved by about April 1, weather permitting.
Boaters took pictures last summer of one another standing waist-deep in the middle of the Boca inlet. Operators leaving the inlet had to make a sharp turn south to avoid bumping or worse on the shoal, then watch carefully for swimmers and snorkelers at South Inlet Park before heading east into the ocean.
The Boca Raton City Council approved spending up to $2.4 million in February to move the shoal sand. That total will be prorated, Bistyga said.
“The city will only pay the contractor for the sand that was placed on the beach and the other project-related components associated with south Boca,” she said.
The central beach renourishment was estimated to cost $11.3 million with the state and county contributing about $4 million. The city and the Greater Boca Raton Beach & Park District split the bills 50-50 for beach renourishment and dredging.