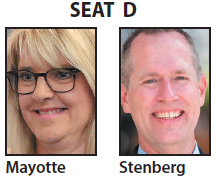 With the countdown on for the March 9 municipal election, the City Council election campaigns have turned negative.
Brian Stenberg, who is challenging incumbent Monica Mayotte for Seat D, has sent out campaign emails that criticize her for having the “wrong priorities,” “offending residents” and “costing taxpayer money.”
Stenberg, vice president of the Boca Raton medical office real estate management firm The Greenfield Group, does not dispute that he has gone dark.
“At this point in the campaign, we have gone negative,” he said. In part, this is because Mayotte has said their positions on issues are similar, and he needed to show where he differs.
“I had to point out some of the negatives of the things she has said and done,” he said.
The reaction of residents is a “mixed bag,” Stenberg said, with some saying they will not vote for him and others thanking him for explaining why he wants to serve on the council.
Mayotte, a former sustainability specialist with JM Family Enterprises who is seeking her second term, criticized his approach.
“I think the residents of Boca want to know what the issues are that matter to the candidates,” she said. “They don’t want to see people going negative.
“He is not saying anything different than what the five of us (on the City Council) are doing. He doesn’t bring any new ideas to the table.”
Among matters that Stenberg has highlighted are comments by Mayotte and now-Deputy Mayor Andrea O’Rourke in 2018 when they questioned whether a proposed luxury adult living facility was a good fit for the downtown.
“Other places within our city limits are probably more applicable for these types of residents,” Mayotte said.
The City Council voted 3-1 to deny the project and the developer sued the city, alleging age discrimination. In an amicus brief in support of the lawsuit, the American Seniors Housing Association said the project denial “represents an unlawful discriminatory bias against seniors with disabilities.”
The city settled the case and the council reversed course and approved the project. “Monica’s anti-senior comments led to a lawsuit against the city,” Stenberg’s campaign said in an email to residents.
Mayotte said she has no bias against seniors. Her vote was based on her belief the proposed building was too big for the lot on which it would be built. The developer, she noted, modified the project to reduce the number of living units before the project was approved.
Stenberg pointed to another lawsuit against the city involving a proposal to build a duplex at 2600 N. Ocean Blvd. The City Council voted 5-0 to reject the project. Palm Beach County Circuit Court judges ruled that Mayotte and O’Rourke prejudged the application and their emails to residents showed they were not impartial. The project was entitled to a new hearing, but Mayotte and O’Rourke could not participate, the judges ruled last year. The hearing has not yet been held.
Mayotte said she could not comment because the duplex matter is still pending. “I will continue to be the voice of the resident. I promised that in my first term. I will continue that promise,” she said.

In the Seat C race to replace term-limited Jeremy Rodgers, former council member and Deputy Mayor Constance Scott said the council unfairly appointed her opponent Yvette Drucker to temporarily fill Rodgers’ seat in October after he was deployed on an overseas military assignment.
That gave Drucker an advantage in the race because she could run as an incumbent, Scott said.
“We all knew the fix was in,” she said, referring to the City Council. “It was no secret. Do I think it is unfair? You bet I do.”
In a recent flier sent to residents, Scott’s campaign said Drucker was “hand-picked in a political power grab” and is “bankrolled by special interests.”
“Will Yvette Drucker only look out for her developer and special interest friends?” it asked. The flier uses a quote from the Sun-Sentinel’s endorsement of Drucker that could be read as indicating the newspaper was endorsing Scott.
Scott defended the flier, saying “it states the facts.” Asked if the flier gave the false impression that the newspaper endorsed her, she said, “You can interpret it any way you want.”
Scott “is always attacking me,” Drucker said. “She is not saying the truth.”
Drucker noted that both she and Scott were among 32 applicants to temporarily replace Rodgers, suggesting hypocrisy is at play.
Asked why she thinks she was chosen, Drucker said, “I feel it was because they want someone with a community background, a new perspective, no political baggage.”
While Drucker has received contributions from the developer community, so too has Scott. Drucker said that this is typical in council races. “They donate to both sides,” she said, maintaining that she is not in anyone’s pocket.
Scott also has criticized Drucker for missing meetings of the Historic Preservation Board when she served on it.
“If she has to pick up kids from school, or has a nail appointment, or something she thinks is important, will she attend” City Council meetings? Scott asked.
Drucker said she did miss “a few” board meetings, but noted this was a volunteer position. She has not missed any meetings when she has served in non-volunteer positions, including the City Council.
“My first job is being a mom. I don’t like it when women attack women for taking care of their children,” she said.
The candidates cite similar priorities as they campaign.
Mayotte’s are ending the coronavirus pandemic and promoting recovery for the city’s businesses, ensuring public safety, and responsible and innovative development that takes into account sustainability and resiliency. She is a strong advocate of environmental reform.
Stenberg predicts the pandemic will decrease commercial property values as tenants work from home or cannot pay rent, and says the City Council will have to grapple with ways to deal with that without raising taxes. He also cites City Manager Leif Ahnell’s eventual retirement and the importance of selecting a strong replacement, and mitigating the impacts of the pandemic on businesses and residents.
Drucker, a first-generation Cuban American who is the first Hispanic to serve on the City Council, stresses helping businesses recover from the pandemic and commonsense but smart development. She hopes the city will be able to have a distribution site for vaccine administration. She is a longtime volunteer in many organizations and previously worked as a human resource manager for ADP.
Scott, director of local relations at Florida Atlantic University who has wide-ranging involvement with the city and civic organizations, cites prioritizing public safety during the pandemic, helping businesses recover, protecting the city from overdevelopment and making Boca Raton a world-class city “again.”
Two other candidates for Seat C have been less visible in the campaign.
Bernard Korn, a real estate broker, has twice lost elections to Mayor Scott Singer and says he is now also running to defeat U.S. Sen. Rick Scott. His campaigning, done mostly by email, stresses rooting out city corruption.
Josie Machovec, a stay-at-home mom, is one of four plaintiffs who filed a lawsuit in an attempt to overturn Palm Beach County’s mask mandate. She also participated in a protest in which a few masks were burned.
Her mask activism began when she asked the County Commission to provide proof that masks are safe and effective, she said. Getting no answer, she joined the lawsuit hoping her question would be answered during the discovery process.
She said she has a “healthy distrust” of government because her grandparents escaped the Nazis.
“Government says it is for your safety,” she said. “History has shown us it is not always the case.
“I am not trying to be a rebel and tell people they can’t do this and that,” she said.
Her priorities are developing a new comprehensive plan for the city, helping businesses hurt by the pandemic regain strength and working to improve sustainability.
“A lot of residents don’t feel heard about the projects being developed in our neighborhoods,” she said. “There is a disconnect between what people want and what the city wants.”
In the Seat D race, Mayotte and Stenberg are financing a large portion of their campaigns. Mayotte loaned her campaign $50,000, while Stenberg loaned $52,000.
As of Feb. 19, Mayotte had $100,375 in contributions and the loan, and Stenberg had $75,077.
For Seat C, Drucker had raised $89,184 and Scott had $70,678. Korn had loaned his campaign $12,100. Machovec had raised $6,491, notably including a $3,500 contribution from the Republican Party of Palm Beach County.