More than two years after Boca Raton City Council members started mulling a new downtown government campus that would replace the old and outdated City Hall, Police Department and community center, a consultant has created two renderings of what that campus could look like.
They are based on what residents, who were surveyed in 2017, wanted included and excluded in the campus. For example, a majority wanted existing ballfields and a tennis center moved out of the 30-acre, city-owned site.
Both plans locate a new City Hall on the western edge along Crawford Boulevard. The building would face east and would be fronted by a public plaza.
Both plans call for two 600-space parking garages. In the two versions, one would be on Northwest Second Street just north of where City Hall now stands.
The location of the second garage differs, as do the locations of the Police Department and community center.
The Downtown Library would remain where it is in both versions, as would the Boca Raton Children’s Museum.
Both have large open space areas north and south of the new City Hall. The GreenMarket, which recently moved from Royal Palm Plaza to the City Hall north parking lot, would stay in the campus.
Not included at this point is a performing arts center. About half of those surveyed wanted one in the campus and it is still possible that could happen.
But a cultural group has come forward with an ambitious plan to build a performing arts complex on city-owned land east of the Spanish River Library, and City Council members might support that if the Boca Raton Arts District Association demonstrates a financially sound plan to build it and keep it running without city subsidies.
Mayor Scott Singer voiced no preference when consultant Song + Associates outlined the options on Dec. 10, but the other four council members said they preferred the first one.
“I think it looks more like a campus,” said council member Monica Mayotte.
The advantages of the second option are that City Hall would be clearly visible from Palmetto Park Road and it has about one-third more green space, which would keep more land available for future development.
Singer voiced two concerns about the first option, including the new City Hall’s lack of clear visibility from Palmetto Park Road and its cost.
“Option A will be considerably more expensive and will take longer” to build, Singer said.
Jill Lanigan, director of business development for Song + Associates, did not present cost figures, which still must be calculated.
But the new buildings would be significantly larger than the existing ones, which the city outgrew long ago.
Song + Associates proposes that the City Hall would be 109,000 square feet, up from the current 74,000 square feet; the Police Department would be 66,000 square feet, up from 38,000 square feet; and the community center would jump to 55,000 square feet, up from 13,000 square feet.
Final decisions on the downtown government campus are well into the future.
The City Council and Song + Associates must settle on a final plan, which won’t be a simple task. Council members suggested at the meeting adding in structures not now included, such a playground, and talked of swapping building locations.
Project cost and a schedule for phased building construction must be decided before a final plan is ready for City Council consideration. 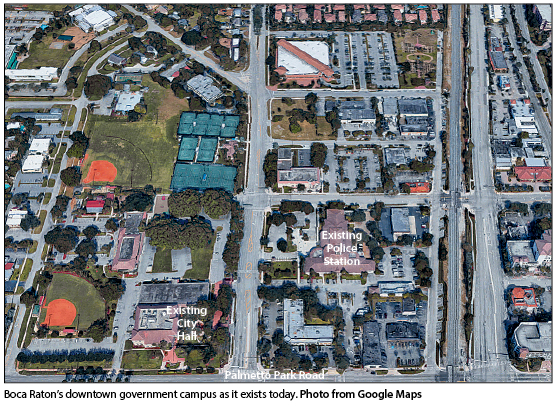