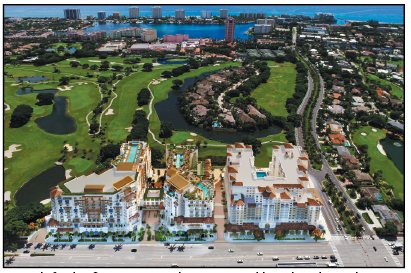 From left, the five-star Mandarin Oriental hotel and its adjacent condos will join the existing 101 Via Mizner luxury apartments on Federal Highway north of Camino Real. Rendering provided

Construction will begin soon on the downtown 164-room Mandarin Oriental hotel and 92 luxury and ultra-luxury branded condominiums.
The Boca Raton City Council, sitting as Community Redevelopment Agency commissioners, unanimously approved redesigned parking garages and 24/7 valet parking plans on Oct. 22, clearing the way for the five-star hotel and The Residences at Mandarin Oriental to be built on Federal Highway north of Camino Real.
Buildings on the site have been demolished, and crews are readying the ground for construction.
Al Piazza, senior vice president for development for developer Penn-Florida Companies, expects construction to begin in late January, with both buildings completed by the end of 2020.
The hotel and condos are phases 2 and 3 of Via Mizner, a $1 billion project that is the biggest development in the downtown’s building boom.
Phase 1 is 101 Via Mizner, a 366-unit luxury apartment building with the most expensive rentals in the city. The building, completed in 2016, is almost fully leased, Piazza said.
Monthly rents for one-bedroom, one-bath units range from about $1,900 to $3,700, and three-bedroom, two-bath units range from about $4,700 to $5,700, according to listings.
The hotel will be the 32nd Mandarin Oriental and the condos will be the ninth branded residences in the world.
The hotel and condos are “going to be a major contribution to our community,” CRA chair Andrea O’Rourke said at the meeting. “I am counting on the brand to meet our expectations.”
The project includes 52,000 square feet of restaurants and luxury shops and a private club. An 18-hole golf course will be located about three miles away just west of Military Trail.
The CRA approved the project in 2015, but Penn-Florida recently sought approval for redesigned parking garages and the addition of valet parking.
The Planning and Zoning Board voted 4-3 against both changes on Sept. 20 after members voiced concerns that the parking garages would be difficult to navigate and that valet parking spaces would inconvenience residents.
Piazza said the objections were the result of misunderstandings, and Penn-Florida officials clarified their planned parking and valet operations in a five-page response given to city staff.
Senior planner Susan Lesser told the CRA commissioners that the developer had “successfully addressed” the issues.