A man rides a recumbent trike at the Boca Raton Innovation Campus on Feb. 20. The campus was home to IBM for almost 26 years. Tim Stepien/The Coastal Star

When looking to move his corporate headquarters out of Los Angeles, Ben Spoont, CEO of e-sports and gaming company Misfits Gaming Group, set his sights on Florida.
He considered Miami, Fort Lauderdale and Orlando. But Boca Raton won out.
Misfits Gaming leased 18,000 square feet of space at The Park at Broken Sound and made the move last year.
Spoont grew up in Boca Raton, giving the city a big edge. He valued the quality of life, availability of good office space and the relatively low cost of doing business in the city.
“Boca afforded us more bang for our buck,” Spoont said.
Beyond that, he is seeing a transformation in South Florida. 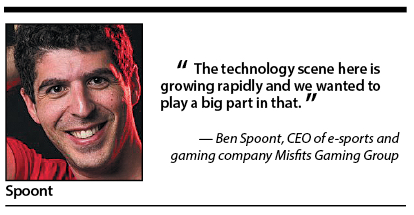 “The technology scene here is growing rapidly and we wanted to play a big part in that,” Spoont said. “It seems like everyone is packing up and coming to South Florida. It is absolutely happening and we are seeing it across industries and sectors.”
After a decade of effort to grow South Florida into a tech and financial powerhouse, the slow progress is moving into a faster gear.
Among the prominent companies that have either announced plans to move or expand into South Florida, or are reportedly considering it, are Elliott Management Corp., Blackstone Group, Icahn Enterprises, Virtu Financial Inc., and Goldman Sachs.
Tech company leaders also are on the move, with a sizable contingent landing in Miami or elsewhere in South Florida.
In a boon to young tech companies that have struggled to raise money here, Softbank has announced a $100 million venture capital initiative aimed at fueling Miami-based startups or those moving to the city.
City and county economic development directors are moving quickly to seal relocation deals with an eye to landing good paying jobs and fattening tax bases. Spoont, for example, is growing his workforce from 70 to 100, with average salaries of $95,500.
Miami Mayor Francis Suarez has drawn outsized attention for his Twitter campaign to lure tech companies.
When a principal of a venture capital firm tweeted that Silicon Valley should move to Miami, Suarez’s Dec. 4 reply “How can I help?” went viral. The support was warmly received by tech company leaders who otherwise feel besieged by criticism. They started packing their bags.
“Miami has been on fire,” Boca Raton Mayor Scott Singer said in a January virtual meeting with residents, describing Suarez as a “one-man Twitter machine.”
“We have entered the fray as well,” he said.
Singer met with Suarez and Fort Lauderdale Mayor Dean Trantalis in January to explore joint marketing efforts for the three cities.
“We have a strong tech base in Boca,” Singer said in an interview, noting that the personal computer was developed at IBM’s iconic Boca complex. “We are expanding our messaging to play on those strengths.”
While Suarez’s tweets have spurred interest, the seeds of the movement to South Florida were planted about three years ago when companies began fleeing high-tax states like New York to low-tax Florida.
The coronavirus pandemic gave companies even more reason to head to South Florida.
“I think anyone who was on the fence about coming has decided to pull the trigger,” said Jessica Del Vecchio, Boca Raton’s economic development manager. “I really think COVID has been the last straw.”
Because of the pandemic, people have been cooped up in high-cost housing and unable to enjoy restaurants or cultural events. They’ve had to juggle working from home with overseeing their children’s schooling on Zoom.
And since their offices were closed, they realized they could work from anywhere, Del Vecchio said. So why not do so in a low-tax state with housing less costly than in New York or San Francisco and with many other advantages.
“COVID has absolutely been a game changer,” Singer said. “When you can work from anywhere, why not work in paradise.”
Kelly Smallridge, president and CEO of the Business Development Board of Palm Beach County, agrees that the pandemic is a catalyst. Company officials “started coming to us saying ‘we don’t need to be in Manhattan.’ … COVID has opened a lot of doors to Palm Beach County,” she said.
About 30 companies are considering moves to the county, and five of those are close to making announcements, Smallridge said in mid-February.
Elliott Management, a prominent New York investment firm, made a commitment to move its headquarters to West Palm Beach last fall. Virtu Financial, an electronic trading firm, said in January it was moving about 30 people to Palm Beach Gardens from New York, with the number expected to grow.
Boca Raton scored a victory in January when Colony Capital Inc., a digital infrastructure, real estate and investment management firm, announced the relocation of its corporate headquarters from Los Angeles. Its digital infrastructure operation has been in the city for about 10 years.
In February, Round Table Wealth Management, based in New Jersey, announced the expansion of its Boca Raton office.
In its announcement, Round Table said the expansion allows the company to maintain close relationships with clients who have moved to Florida as a result of the pandemic.
In mid-February, Del Vecchio was speaking with two companies about moving from New York City and Chicago.
Her effort to lure companies includes advertising inserts in the Wall Street Journal, Chicago Tribune and San Francisco Chronicle. The four-page Journal insert caught the eye of the companies she is now talking to.
She also sees opportunity at the Boca Raton Airport, where she has placed marketing materials that corporate executives will see as they fly in and out.
The city complemented Del Vecchio’s efforts by establishing an Office of Innovation, led by innovation strategist Pedro Moras, who joined the city about 18 months ago.
His work is focused on making Boca Raton operate more efficiently and developing a stronger technology and startup ecosystem to attract entrepreneurs, Moras said.
“One of the biggest challenges we see in South Florida is funding for startups,” he said. “We are looking to see how we can attract other players to provide funding for these startups.”
He has worked with a very large Brazilian software development company that has established an office in the city and another Brazilian company that invests in startups and is looking to open a Boca office. 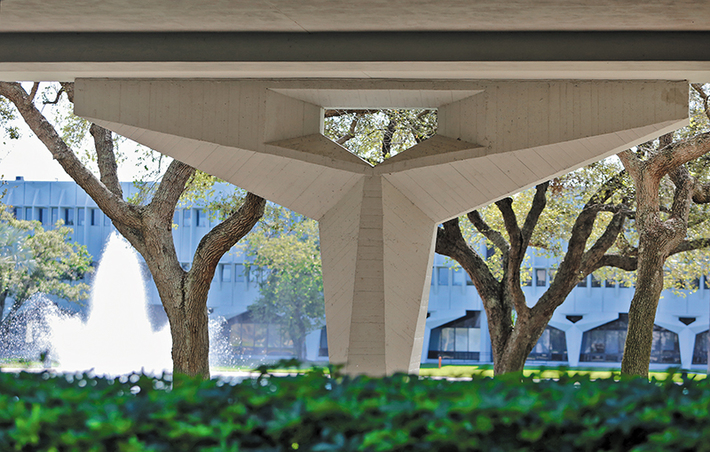 The Boca Raton Innovation Campus, once the IBM plant, designed by Marcel Breuer and Associates, is emblematic of Boca’s history as a technology hub. Tim Stepien/The Coastal Star

Prime space available
Companies relocating or expanding in Boca need office space, and the city has plenty to offer in two primary locations.
The Park at Broken Sound, the former Arvida Park of Commerce at 5100 Broken Sound Boulevard NW, has 5.2 million square feet of office space, 618,000 square feet of commercial/retail space and more than 1,000 multifamily residential units.
The 700-acre development is home to many corporations already located in the city.
The 1.7 million-square-foot Boca Raton Innovation Campus, built in 1969 for IBM, was acquired in 2018 by Crocker Partners and is now undergoing a $100 million renovation.
“We want to be the technology and life sciences hub”for the southeastern United States, said Crocker marketing director Giana Pacinelli. “We want to have national recognition.”
Sitting on 123 acres at 5000 T-Rex Ave., it is designed to withstand a Category 5 hurricane, has a power plant that can maintain power for 13 days, conference center, 1,200-seat dining hall and a STEAM lab, meaning science, technology, engineering, arts and math education.
BRIC has 36 tenants, including Modernizing Medicine — which has announced it will add more than 800 new jobs — Canon, Bluegreen Vacations, MDVIP and Baptist Health South Florida, which recently leased nearly 38,000 square feet of space. 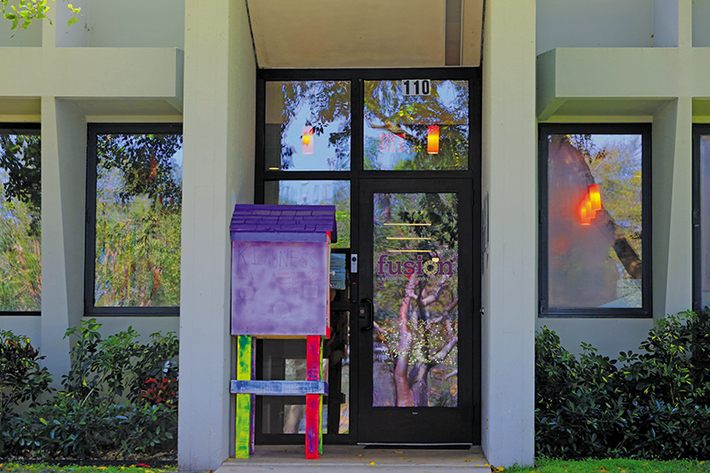 Universities help startups
Local universities are playing a strong role in nurturing and building startups.
Florida Atlantic University’s Tech Runway, launched in 2014, is a public-private partnership that is a hub to accelerate technology development and incubate startups. It provides work space, mentoring and helps find venture funding.
Startups can then transition to FAU Research Park, where they can continue to grow.
Lynn University created a Social Impact Lab in 2017 to provide cultural and career preparation programs, social impact training and networking opportunities to help students discover “purpose-driven careers.” It also offers a bachelor of science in social entrepreneurship.
How everything Boca has to offer can help launch a new tech company is illustrated by Harald Braun, who believed he had found “the next big thing in terms of exponential growth.”
The former CEO of Siemens Networks USA and Aviat Networks started Guident last year. The company has developed technology to enhance the safety and efficiency of electric autonomous vehicles.
He plans to establish a remote monitoring and control center in Florida that would be something like an air traffic control tower. It would monitor autonomous vehicles and take over control if problems develop.
“We developed a strategy to improve safety and facilitate a faster adoption of autonomous vehicles,” he said. ”We believe it is the future.”
A Boca resident since 2002, Braun said the city is a good place to start his company.
The city has many talented former IBM and Siemens employees, and the county is home to “industry captains” such as former Apple CEO John Sculley, he said.
“We are seeing a trend right now as people relocate from Silicon Valley and other parts of the U.S. … to South Florida with hotspots in Boca Raton and Miami.
“There is a lot of talent here in the technology space,” Braun said. “It is not hype.”
He also notes “we are surrounded by universities and students and space.”
Braun won a launch competition at Tech Runway, which entitled him to office space there. He expects his control center to be completed this year. If it operates as expected and he is successful with fundraising, Braun plans to relocate to BRIC.
While the race is on to attract technology and financial companies, the counties and cities are not competing, but working together, Del Vecchio, Smallridge and Singer said.
That cooperation didn’t exist until Amazon announced in 2017 that it was looking for a location for a second headquarters, Smallridge said. With a prize that big, everyone decided to join forces.
While South Florida lost out, the cooperation continues.
“They won’t come to Palm Beach County unless they like South Florida first,” Smallridge said. “It is really important that we promote ourselves as a region.”