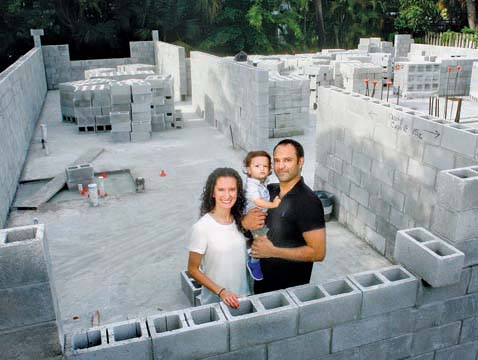 Amara (l-r), Ari and David Kaiyalethe pose in the ground floor of the new home they are building in Boca Raton to be within walking distance of Chabad of East Boca Raton. Tim Stepien/The Coastal Star

David and Amara Kaiyalethe are building a home in the Boca Villas neighborhood, attracted by the developing city and increasing opportunities to walk places downtown. One destination of prime interest: the Chabad of East Boca Raton, which recently won approval for a new synagogue and Israel museum at 770 E. Palmetto Park Road.
“We wanted to live somewhere within walking distance to the new synagogue,” said David Kaiyalethe, whose home will be about three-quarters of a mile from the Chabad. “On the major holidays we try to keep the traditions. It’s very important on those holidays for us to be able to walk.”
The family is one of many that Rabbi Ruvi New expects will locate here now that the Chabad’s permanent home has been determined. “I already know people who have put down payments on [planned] condos.
“We’re hopeful and optimistic,” he said. “When we start construction, it will encourage people to invest here. This is a win-win for us and the city.” Rabbi Ruvi New poses with workers who were installing a sign honoring the Chabad and museum’s new location at 770 E. Palmetto Park Road. The location is on the former site of La Vieille Maison restaurant. Jerry Lower/The Coastal Star

The Chabad, which has long outgrown its current location at 120 NE First Ave., is part of the largest Jewish religious organization in the world, with more than 4,000 locations, according to New. Chabad itself is a Hebrew acronym that stands for “Wisdom. Understanding. Knowledge.”
The Chabad is orthodox, following laws and customs that can be as visible as beards, black hats and separation by gender. Many of the 75 families that are members walk to services each Saturday, said New.
But the Chabad is welcoming, New said, and its membership is a mix — not all are orthodox.
“It’s driven by a vision that seeks to give every Jew an opportunity to connect to Judaism,” he said. “Chabad is nonjudgmental and it’s a big tent, inclusive of every type of Jew. What distinguishes Chabad from typical orthodox, is people who attend the Chabad don’t have to fit into a particular mold — reform or conservative.”
Founded in the 18th century by Rabbi Schneur Zalman and based in Lubavitch, Russia, for more than 100 years, Chabad is part of the Chassidic movement and is now based in New York’s  Brooklyn borough.
The religion puts “more of a spotlight on a deeper intellectual connection to Judaism” and emphasizes each person’s connection to God, said New, who started the East Boca group in his living room 15 years ago.
“Chabads are really startups. The rabbi is like a spiritual entrepreneur,” New said, pointing out they’re not hired by boards. They start up the venture and raise funds for it themselves.
New is embarking on fundraising campaigns for the $10 million construction of the new facilities, engaging in parlor meetings, individual solicitations and events like a planned January gala.
The range of services Chabad offers worldwide depends on the needs of the community, from social welfare to humanitarian, schools, camps and programs for young adults, said New.
The Chabad’s outreach here includes local businesses, assisted living facilities and large scale programs like the annual Hanukkah concert in Mizner Park.
Part of the Kaiyalethes’ attraction to the Chabad was motivated by their 17-month-old son, Ari. “We wanted to give a positive exposure to good, moral, ethical people as we teach our son about the world,” Kaiyalethe said.
The Kaiyalethes, neither of whom is orthodox, moved from Minneapolis and were introduced to the Boca Villas neighborhood by Amara’s parents. In Boca, they also found the Chabad.
“We went to services and met Rabbi New and the people,” Kaiyalethe said. “They were great. Chabad is very inclusive.”
People at services wear a range of attire, including some in orthodox dress. “You’ll see a bunch of guys in slacks and dress shirts, some in shorts and some in jeans,” Kaiyalethe said. “If a woman wants to cover her hair with a wig or scarf, she does. If she doesn’t, she doesn’t. I can show up anyway I want and everyone’s OK with it.”
The name of the Chassidic movement comes from the word chesed, which means loving kindness, Kaiyalethe explained. “This focus on loving kindness shapes the way you interact with the world. That’s why … anyone can come where they are in their journey. Without pressure.”