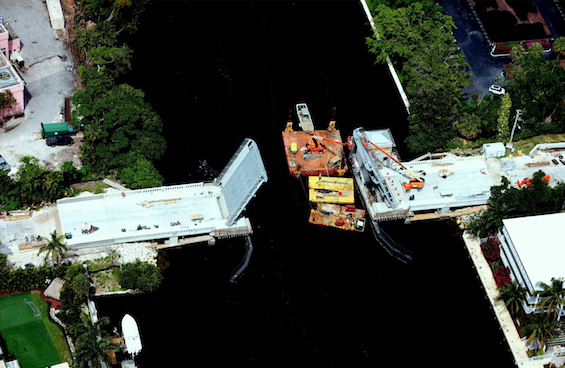 Residents in the area have given good reviews of the restored Camino Real bridge, which is set to reopen to land traffic on June 20 after more than 14 months of repairs. Photo provided

After 14 months of renovations, the Camino Real bridge over the Intracoastal Waterway is set to reopen to land traffic on June 20.

It could have opened in mid-April, its original schedule, but the city nixed a proposal to allow work at night for extra repairs deemed necessary after the $8.9 million project began.

In an Oct. 5 email to Palm Beach County, which is responsible for the project, city civil engineer Moe Morel said potential “long and loud” complaints from snowbirds and year-round residents about lights and generator noise outweighed the benefits of opening the bridge earlier.

“Many of the properties in the area are owned by part-time residents. They should start arriving in Boca next month and may be surprised that Camino Real is even closed, let alone with nighttime work occurring ‘in their backyards,’ ” Morel wrote.

“As November approaches, many residents with impact glass windows will be opening those windows at night to enjoy the cooler evening temperatures and ocean breeze,” he continued. “This, when combined with the lack of background noise in the late night, will probably be the first time residents will be aware of any noise from your project.”

Homeowner groups, which were not asked for input on Morel’s decision, said they looked eagerly toward the end of construction.

“Although it’s been an inconvenience to beach residents, overall we will be very excited for the June opening and the additional entrance and exit to the beach,” said Emily Gentile, president of the nearly 12,000-member Beach Condo Association of Boca Raton and Highland Beach.

Craig Fox, chairman of the Boca Raton Federation of Homeowner Associations, said he was thrilled with the bridge renovation and that Morel’s decision was “a tough one.”

The bridge’s closest neighbors are in the Royal Palm Yacht and Country Club, the iconic Boca Raton Resort and Club and numerous condos on the barrier island.

“I can see that there would be some kind of backlash” if the city had allowed construction at night, Fox said.

Morel said as much in his response to the county.

“Based upon my 21 years as city civil engineer for Boca Raton, I believe that the conditions that I have described will result in long and loud complaints, which would force the eventual shutdown of night activities,” he wrote. “I think that we agree that scheduling nighttime work and then canceling nighttime work would be worse than not approving it at all.”

The 80-year-old bridge was closed on April 12, 2018, for an anticipated 12 months to widen slightly the fixed and bascule bridge elements and move the bridge-tender house from the south to the north on the island side.

Also in the plans were renovating and replacing the fender system, new mechanical equipment for the bridge, reconstruction of the roadway approaches and sidewalks and minor drainage improvements.

But in July and August, construction crews discovered heavy deterioration and severe loss of existing steel sections that required additional repairs. The county asked Boca Raton for permission to work nights Mondays through Thursdays starting in November to be able to open by April 12, 2019.

Boca Raton did approve night work starting May 13 and continuing until the June 20 opening.

When deciding whether to allow such work, city staff tries to balance the contractor’s needs, the residents’ expectations to have the bridge open and the potential disruption to the neighbors, city spokeswoman Chrissy Gibson said.

“This latest request didn’t include loud work, like backup alarms, impact noises or riveting,” Gibson said. “Night work requires significant lighting as well, and in this case, the lights will be pointed in the opposite direction of the residents at all times.”

The renovated bridge has a similar architectural design, the same clearance height and a similar railing to the old span. The two-lane drawbridge handled about 7,600 vehicles a day before it was closed, about half the traffic on the four-lane Palmetto Park Road bridge, county figures show.

Architect Addison Mizner designed Camino Real in the 1920s to connect the railroad station to the Boca Raton Resort and Club. In 1929 developer Clarence Geist put a temporary swing bridge at the end of the road to cross the Intracoastal.

County engineers planned to demolish the bridge in 2012 and replace it with a $44 million span, but learned during the permitting process that it was protected as part of the county’s Camino Real Road and Bridge Historic District.