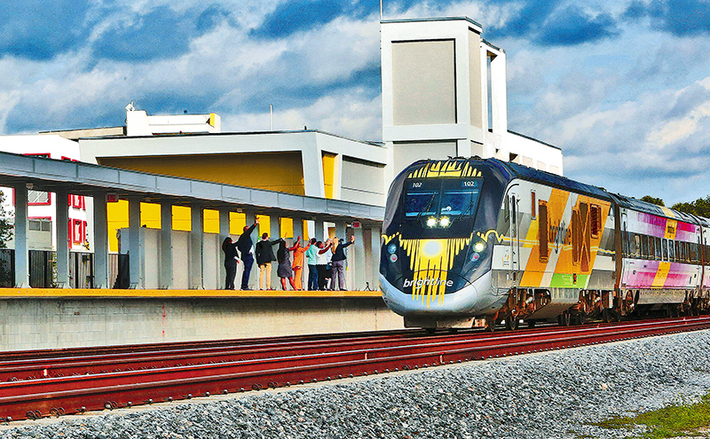 On Dec. 6, the promised end-of-year opening of Brightline’s Boca Raton station looked like a deadline certain to be missed.
Construction workers were hard at work on both the station and parking garage, whose interiors were works in progress. Heavy equipment was in constant motion. Paved walkways had yet to be installed. The station sign was on the ground, wrapped in plastic.
But just two short weeks later, the $56.2 million complex was largely completed and ready to accommodate passengers.
“How about a brand-new station for the holidays?” Brightline President Patrick Goddard asked a cheering crowd at a station ribbon-cutting ceremony on Dec. 20, one day before the long-awaited rail service began. 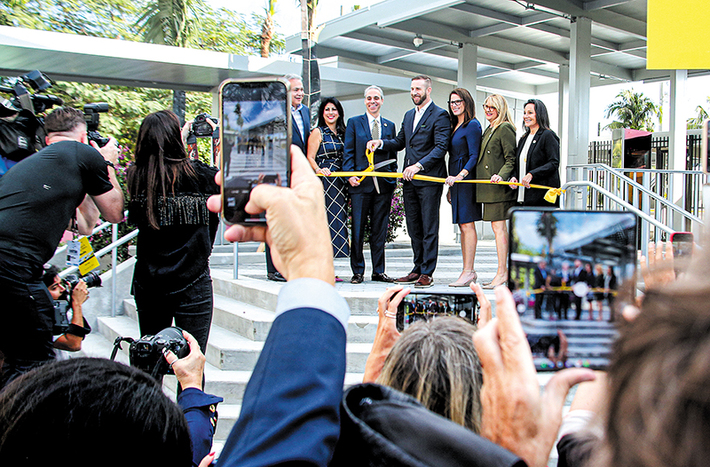 City, county and state officials gathered for the event were thrilled that the station is now a reality, three years after City Council members approved a deal that allowed the station and garage to be built on 1.8 acres of city-owned land and one year after construction began.
“This is a historic moment for Boca Raton,” said Mayor Scott Singer. “We are going to be seeing the benefits of this for decades.”
Connection to a modern rail line running from Miami to West Palm Beach, and then to Orlando in 2023, will help local businesses attract employees and will bring visitors to the city’s cultural institutions and restaurants, Singer said.
Early signs point to strong local interest, Goddard said.
When Brightline announced the station’s opening on Dec. 15, “our website saw the most traffic we have ever seen,” he said. “The majority of that interest was in the Boca station.”
Seventy percent of advance bookings through the end of December were from Boca residents, he said. “We are very optimistic about this system being of service to this community.”
Troy McLellan, president and CEO of the Greater Boca Raton Chamber of Commerce, is among Brightline enthusiasts.
“It is a huge moment for us, for sure,” he said. “It gives the ability for employees … to get to their workplace without having to get on I-95. It provides accessibility to a broader and larger workforce.”
McLellan noted the large number of corporations based in Boca. “Our members need access to more employees,” he said. “Brightline does that in one of the best ways possible.”
In launching the service, Brightline is offering one-way tickets starting at $10 through January. A round-trip to and from Fort Lauderdale or West Palm Beach costs riders a total of $20, and a round trip to Miami costs $25.
The daily parking rate for the 455-space garage is $7 for riders who purchase parking with their train tickets. Parking for those who do not purchase in advance, or who don’t intend to ride the train, is $6 for one hour up to $15 for three to 24 hours. The station includes electric vehicle chargers. Dedicated parking spaces for patrons of the adjacent Downtown Library are free.
A new station in Aventura also was scheduled to open on Dec. 21 but was delayed until Dec. 24 while construction inspections were finalized. Brightline now has five South Florida stations. No more will be added, Goddard said, and his company is now focused on rail service to Orlando, a project that is 88% completed.
Peter Ricci, director of Florida Atlantic University’s Hospitality and Tourism Management program, said it is logical that Brightline built stations in Boca and Aventura.
“They were chosen, in my opinion, very strategically and make sense,” he said. The Aventura station is near the Aventura Mall, with high-quality shopping and nearby first-class hotels. Similarly, Boca has the Town Center mall and The Boca Raton and Waterstone resorts.
The Boca station is located at 101 NW Fourth St., immediately east of the Downtown Library — a four-block walk to Mizner Park. To make that walk more inviting and pedestrian-friendly, the city spent $3.9 million on improvements along Northwest First Avenue and Northwest and Northeast Second Street, including shade and palm trees.
For those who want to skip the walk, Brightline is offering two on-demand Brightline+ electric golf carts to transport people to the downtown. At 22,000 square feet, the Boca station is Brightline’s smallest. The Fort Lauderdale and West Palm Beach stations are 60,000 square feet, and Aventura’s is 34,000 square feet.
Yet the Boca station offers the same amenities as the other stations, including free high-speed Wi-Fi and separate lounges for regular and premium-ticket riders. It includes MRKT, an automated convenience store offering snacks and drinks, and complimentary food and drinks for premium customers.
The station does not have full bar service for regular passengers, but Goddard indicated that could change.
The station also has kiosks where passengers who did not book online or on the Brightline app can purchase tickets.
The main difference is that the Boca station is on one floor, so riders need not go up an escalator or elevator to the lounges and then back down to board the train.
Trains will run more frequently during peak-travel morning and evening hours, generally once every half-hour or hour. At other times and on weekends, the trains will run about every other hour.
Schedule information is at www.gobrightline.com.
Brightline paid $30 million of the station cost, while the city paid $9.9 million for the parking garage. The U.S. Department of Transportation awarded the city a $16.3 million grant in 2020 to partially fund the project.
According to Brightline’s most recent financial report, the rail line in 2022 carried 944,030 passengers as of Oct. 31. Revenues for that period totaled $23.5 million.
The COVID-19 pandemic prompted Brightline to halt operations in March 2020, with service resuming in November 2021. Ridership was up 23% for the month of October compared with October 2019.