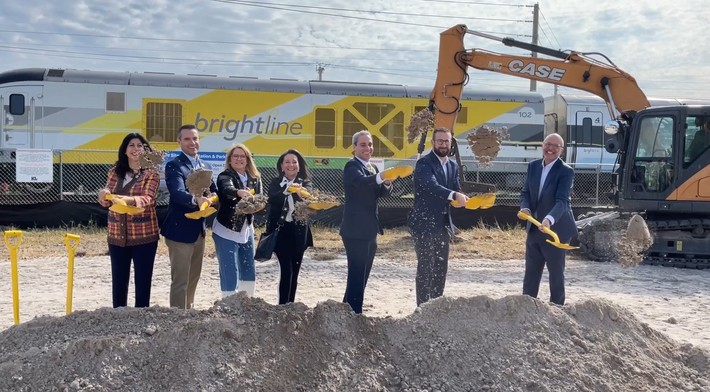 The weather was gorgeous and the mood ebullient as Brightline and city officials hoisted ceremonial shovels to break ground on the long-awaited Boca Raton station just as a train zipped by behind them.
City leaders are thrilled that the station is becoming a reality, saying it will boost Boca’s economy and state and national profile.
“This is a great day for Boca Raton,” Mayor Scott Singer said at the Jan. 25 ceremony. “So many residents and businesses have talked about how Brightline will be a game-changer for our city, and we at the city know this and are unanimously behind it.”
Brightline President Patrick Goddard noted that many other South Florida cities coveted a station, and credited Singer’s persistence with convincing company leaders to choose Boca Raton.
As Singer called monthly, and then weekly and daily, to lobby him, “we all began to realize the incredible potential for a Brightline station at the heart of Boca’s business and leader district,” Goddard said.
“Today we are hearing more and more voices champion the potential for high-speed rail in America and here in Florida we are offering the blueprint on how to make it happen,” he said.
Also attending the ceremony were U.S. Rep. Ted Deutch (D-Boca Raton), Discover the Palm Beaches CEO Jorge Pesquera, the City Council’s four other members and representatives of companies building the station.
Construction is starting about one year later than initially anticipated in part because of the impact of the coronavirus pandemic, which prompted Brightline to halt passenger service in March 2020. Service resumed in November 2021.
The station and 4.5-story, 455-space parking garage, located just east of the Downtown Library on 1.8 city-owned acres, are expected to be completed this fall. Garage construction began in December.
The station will be similar to those in Fort Lauderdale and West Palm Beach, although those are about 60,000 square feet while Boca’s will be 38,000 square feet.
The station will feature passenger lounges, high-speed WiFi, a bar and restaurant available to premium ticket passengers and a cashless market with beer, wine and snacks open to all passengers.
The $46 million project cost will be partly defrayed by a $16.3 million U.S. Department of Transportation grant. Brightline will pay $20 million of the station cost, while the city will spend $9.9 million on the garage.
The upscale rail line is nearing completion of a 168-mile track to Orlando, with 70% of the work done.
It also has instituted Brightline+ service, which provides vehicles at its stations to ferry passengers to their final destinations. The company expects that 60% of passengers eventually will purchase Brightline+ tickets, it said in a December report.
Passengers are quickly returning to Brightline now that the company has resumed operations. Its trains carried 95,348 passengers in December, the report said, compared to about 127,000 in December 2019.
The average fare in December increased to $13.21, up from $9.55 in November. Brightline’s report said the company expects average fares to continue to increase at the beginning of 2022 as reopening promotional fares are discontinued.
Brightline has come under scrutiny for the number of fatalities on its tracks, a problem shared by other train companies.
Company officials attribute the deaths to suicides and risk-taking by motorists who try to beat the trains, and say they meet all safety standards.
Brightline has launched an education program in an effort to reduce fatalities and has contributed funding to mental health programs. It also has made safety upgrades to many of the rail crossings in South Florida and is piloting a drone program to alert train conductors to intruders on the tracks.