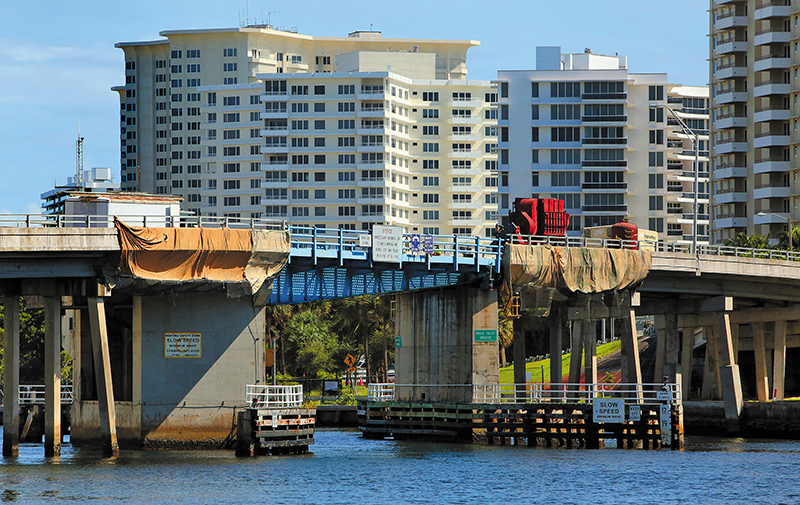 Materials and tarps cover both of the unmoveable portions of the bridge over the Boca Raton Inlet in late August. The bridge is getting a cleaning and new paint. Tim Stepien/The Coastal Star

The bridge over the Boca Raton Inlet, which connects the south barrier island to all points north, closed to land traffic in August for a 60-day paint job.
The Florida Department of Transportation, which is responsible for the bridge on State Road A1A, said the construction schedule is actually 80 days, not counting weather delays and holidays. It expects the project to be finished by late fall.
The bascule bridge, officially named the Haven Ashe Bridge after a long-term bridge tender, will change in color from light blue to a darker blue called Federal Standard 15052.
Tarpon Springs contractor Seminole Equipment Inc. won the $802,818 contract to clean and paint structural steel and concrete portions of the bridge as well as its concrete barriers, deck, overhang and bridge tender house.
Highway vehicles are being detoured to Federal Highway via Palmetto Park Road and Hillsboro Boulevard. The bridge, which normally opens on demand, will be kept raised so the repainting does not affect boat traffic.
The original wooden bridge was replaced by the current structure in 1964, a year after Ashe died. It opened electrically but had to be closed manually by Ashe, who became its tender in 1942, according to wikimapia.org.