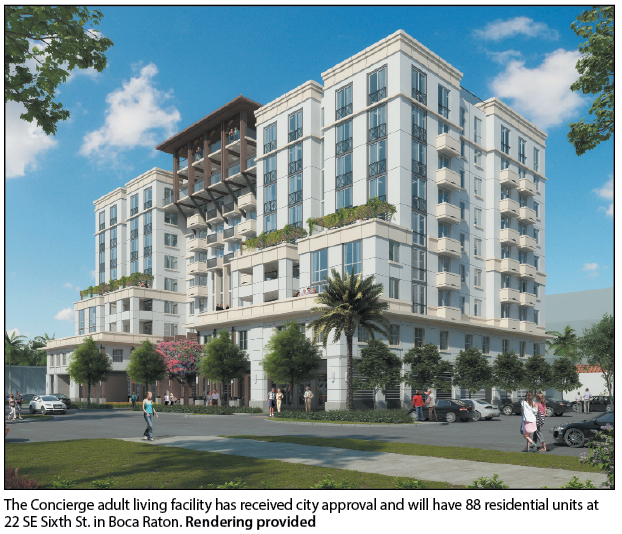 Bowing to strong push-back by a developer who contended the Boca Raton City Council improperly rejected its proposed luxury adult living facility, council members have sharply reversed course and approved the downtown project.
The council, sitting also as Community Redevelopment Agency commissioners, quickly approved settling a lawsuit filed by Group P6, and then immediately approved its Concierge project unanimously on Nov. 13.
Group P6 gave up some ground in the settlement by reducing the number of living units from 110 to 88 and the number of parking spaces from 127 to 106.
But the deal also required the council members to approve the Concierge if they wanted to settle the case.
It also removed the threat posed to the city by project landowner Robert Buehl, who had announced that he would file a Bert Harris Act lawsuit against the city seeking as much as $100 million in damages. That suit now won’t be filed.
The city did not admit that it had acted wrongly when it voted 3-1 to deny the Concierge on July 23.
Two council members cast the settlement and project approval as the developer and landowner responding to council concerns rather than a hasty retreat from a decision that posed a financial risk to the city.
“So take note any potential litigants to the city of Boca Raton,” said Mayor Scott Singer. “The path to victory is not the mere filing of litigation. Significant response to council concerns is what I think you are seeing here today.”
After the meeting, Group P6 co-owner Ignacio Diaz said the reduction in living units will not hurt the project and will allow him to increase the size of some units.
“This is the optimal mix [of units]. We think it will be more in line with what the market is,” Diaz said after the meeting. “It is a win-win for us and the city.”
Buehl said in an email that he remains “extremely excited” about Concierge, which he said meets a social need in the city.
“I am pleased that the city decided to do the right thing but find it unfortunate we had to force their hand,” he said.
The developer and landowner will build the $75 million senior living facility at 22 SE Sixth St., and will have 26 assisted living and 42 independent living units as well as 20 memory care units. Construction is expected to begin at the end of next year.
Amenities will include a rooftop pool, summer kitchen and lounge, yoga and music areas, wine bar and bistro, full-service restaurant, theater, salon, spa and gym.
The council’s July rejection was unexpected because the project was not controversial. Group P6 has a reputation for following the city’s development rules, its previous condo projects were easily approved, city staff recommended approval of the Concierge, and the City Council unanimously supported a separate downtown luxury ALF last year.
But some council members expressed concerns that the facility would overburden the city’s fire-rescue services and lacked adequate parking.
Council members Andrea O’Rourke and Monica Mayotte questioned whether another ALF was a good fit for the downtown. Speaking of the city’s vision of a vibrant downtown, O’Rourke said she was not sure how much the Concierge’s residents would be engaged in the community since the Concierge would provide many services.
“I’m not against ALFs in our city,” Mayotte said. “I’m just not sure that the downtown is the right location for them. Other places within our city limits are probably more applicable for these types of residents and I just wanted to make that clear.”
Mayotte and O’Rourke suggested the city may need to create a way for ALF developers to pay for the increased cost of providing ambulance service. Group P6 said its ALF would not result in significantly more fire-rescue calls.
City Attorney Diana Grub Frieser said there are legal impediments to levying a special assessment only for increased demand for a service.
In his August announcement that he planned to file a lawsuit, Buehl highlighted council member comments about the elderly.
“The statements made by elected officials regarding our city’s elderly residents were absolutely discriminatory and shameful,” Buehl said at the time.
Group P6 echoed Buehl’s age discrimination claim in its August lawsuit that sought to have the court quash the city’s denial of the project.
The developer also noted that it is the city’s obligation, not the property owner’s, to provide fire-rescue services.
The American Seniors Housing Association filed an amicus brief in support of Group P6 in October, saying the project denial “represents an unlawful discriminatory bias against seniors with disabilities and the providers of care and services that seek to meet their needs.”
Other lawsuits remain
The city has another contentious development-related legal headache.
Developer and landowner Crocker Partners sued the city in May, seeking to have a judge compel the city to write land development regulations for the Midtown area and to rule that the City Council’s January delay in adopting them, and instead voting to develop a “small area plan” for Midtown, are illegal.
Crocker Partners filed a Bert Harris Act lawsuit against the city in October, seeking $137.6 million in damages on grounds that the city has failed to adopt the regulations.
Cypress Realty of Florida, a landowner that partnered with Crocker Partners on Midtown planning, also went to court in October, saying in its lawsuit that the city has been “stonewalling” its efforts to develop 10.2 acres.
Crocker Partners and other landowners originally wanted to redevelop 300 acres east of the Town Center mall. But without land development regulations, that plan has died.
In the Concierge case, neither side admitted fault or liability, and each will pay its own attorney’s fees and costs.