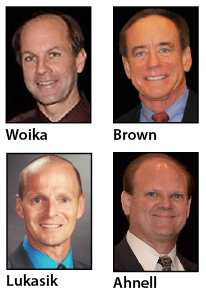 With looming retirements, Boca Raton is on the verge of a wholesale change in its top leadership.
Deputy City Manager Mike Woika will end his 22-year career with the city this summer. Deputy City Manager George Brown, a 45-year city employee, will leave by the end of this year. And City Manager Leif Ahnell, who has held Boca Raton’s top position for 23 years, will depart in 2024.
Andy Lukasik, North Palm Beach village manager since 2017 who previously served as Jupiter’s town manager for 13 years, will replace Woika on July 25.
Lukasik said he wasn’t actively looking for a new position, but by chance saw that Boca Raton was conducting an applicant search.
“The opportunity to work in Boca, given the complexity of the issues and projects they are working on, was really intriguing,” he said. He had worked on complex projects in Jupiter and missed that when he joined much smaller North Palm Beach.
Both the city and Ahnell have a great reputation, he said. “I couldn’t pass up the opportunity with Boca.”
The salary range for deputy city manager is $175,000 to $195,000. A recruiting firm aided the city in its search for candidates.
A recruiting firm also will help identify a replacement for Ahnell, in a process that potentially could start in the fall of 2023, Ahnell said at the City Council’s May 31-June 1 goal-setting sessions.
Ahnell has been held in high regard by council members for many years. He consistently receives top marks in annual evaluations for how he runs the city.
The departures were on the minds of council members as they set priorities for the coming year, with several saying they needed to start succession planning.
With the retirements, “we are having brain drain,” Mayor Scott Singer said. “We need to plan for that now.”
The city manager selects his top lieutenants, but the City Council makes the final call on who will serve as city manager.
For that reason, it is important that the council be involved in the process early on and identify what experience and capabilities they are looking for in whoever replaces Ahnell, Singer said.
The departures come at a time when Boca Raton and other cities are having difficulties in hiring and retaining city workers.
City government pay falls behind what the private sector is offering, and the strong employment market affords attractive opportunities to move into new jobs. Workers also are less inclined now to stay in the same job long-term.
Even so, Boca Raton is faring better than many other cities in retaining employees, according to a report distributed to council members before the goal-setting sessions.
The city’s employee turnover rate is about 10%, well below the local government average, the report said. In 2021, the city received almost 15,000 job applications and hired 103 full-time and 158 part-time employees. The city has just over 1,900 employees.