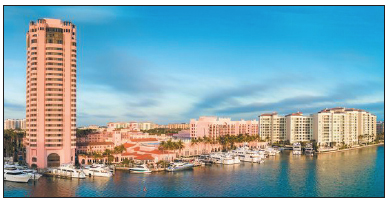 MSD Partners, Dell’s investment advisory firm, announced an agreement to buy the club from Blackstone Group on April 22. While the company did not disclose a sale price, deeds made public two days after the deal closed on June 4 totaled $461.6 million.

But a June 11 Fitch Ratings report pegged the purchase price at far more than that.

MSD Partners acquired the resort for $589.7 million, including furniture, fixtures and equipment. The company also paid $285.3 million for the resort’s Premier Club, whose 11,000 members have access to all the resort’s facilities and to the Boca Country Club, an extension of the resort located along Congress Avenue north of Clint Moore Road.

The total is $875 million, not including $22.9 million set aside for reserves and to pay closing costs.

The transaction was financed with a $600 million loan from Goldman Sachs and nearly $300 million of buyer equity, according to the Fitch report.

The sales price far eclipses the county’s previous top property deal: the 2014 sale of the Mall at Wellington Green for $341.1 million.

“The purchase of the Resort & Club for a strong price by an experienced operator, MSD Partners, is another sign of Boca Raton’s huge attractiveness as a place for investment,” Mayor Scott Singer said in an email. “MSD has invested great sums in other historic properties to enhance their traditional appeal and we look forward to their continued success in Boca Raton with this world-renowned asset.”

The resort will continue to be managed by Hilton under the Waldorf Astoria Hotels & Resorts brand.

John Tolbert, the resort’s president and managing director, was not available after the closing for comment on MSD Partners’ plans for the resort.

But the Fitch report says that MSD Partners plans to invest $75 million over the first four years of the loan term. Improvements, still in the planning stages, will include room renovations and upgrades of public spaces and amenity packages.

Fitch assigned the resort a property quality grade of A-minus. It described the resort as well maintained, saying the spa and rooms in The Cloister are in “excellent condition.”

About 60 percent of the resort’s demand in 2018 came from meeting and group business, compared to 49 percent for the overall hotel market. Meeting and group bookings are at lower rates than leisure bookings.

That brought down overall room revenue. But the resort’s total revenue per available room in April was $620, “which is considered strong,” the report said.

An affiliate of Blackstone, a New York-based private equity firm, acquired the 337-acre resort in 2004 and invested more than $300 million in the property.

MSD Partners, based in New York with additional offices in Santa Monica and West Palm Beach, said in its April announcement that the purchase is “a natural extension of our portfolio of luxury hotels and resorts.”

The Boca Raton Resort & Club dates to 1926, when architect Addison Mizner opened the Cloister Inn on the shore of Lake Boca Raton.

Dell, chairman and CEO of Dell Technologies, is ranked by Forbes as the 25th-richest person in the world with a net worth of $35.4 billion as of June. He launched Dell Computer Corp. in 1984 and began selling personal computers online in 1996.