A recurring sand shoal off Boca Raton Inlet has gotten shallower and more dangerous over the past six months, causing some boats to bump bottom as they come and go and others to run aground.
Boaters familiar with the inlet have taken note and are doing what it takes to come and go without problems. Most turn south after clearing the south jetty and run south along the beach before heading east into the ocean.
But some boats are going high and dry on the shoal.
The Fort Lauderdale office of TowBoatU.S. has freed four boats in the past few months that were stuck on the shoal outside Boca inlet.
The towing franchise office knows of five others that have run aground there.
Some freed their boats without assistance by waiting for the tide to rise.
Barney Hauf, of TowBoatU.S., said some boaters stop outside the inlet after seeing the shoal and call his office on their VHF radios to ask for advice before attempting to enter.
Hauf said the TowBoatU.S. staff usually advises boaters to enter the inlet from the south. But even that route can be tricky at low tide. A boat that draws 5.5 feet of water bumped bottom using the south passage at low tide recently, he said.
The shoal is most noticeable at low tide, when the white foam of breaking waves seems to barricade the inlet’s entrance like a fence.
Capt. Paul Varian, who operates a 32-foot inboard dive charter boat, said the shoal became shallower after sand was pumped on the beach north of the inlet last winter. He still uses the inlet, but like many other boaters, he runs south after clearing the jetty.
“You can’t go straight out on any boat at any time,” Varian said. “I see people hit [the shoal] all the time.”
Running south from the inlet requires boaters to watch carefully for swimmers at South Inlet Park, immediately south of the inlet.
Swimmers are supposed to stay in the designated area within 150 feet of the beach, and boaters are supposed to steer clear, said Steve Kaes, south district training officer for Palm Beach County Ocean Rescue.
The park’s swimming area is supposed to be marked by a line of buoys, but the marker buoys were missing in August.
Boaters also must watch for snorkelers who frequent rocks in 12 feet of water off South Inlet Park. Palm Beach County placed the 17,000-ton rock pile there in 2003 to create a shallow artificial reef.
Not all snorkelers visiting the shallow reef display red-and-white dive flags on floats as required by law, said Gene Folden, chairman of Boca Raton’s Marine Advisory Board.
A boat hit a snorkeler at the shallow reef off South Inlet Park about four years ago, Kaes said. Lifeguards rescued the badly injured young man. The boat operator never stopped. 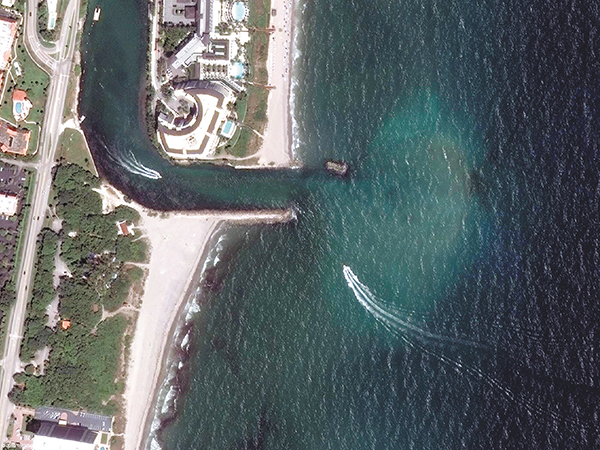 An incoming boater swerves around the sand shoal that has accumulated just outside the mouth of the Boca Raton Inlet. A rock pile sits just north of the inlet. Photo by Terra Server

Shoals come and go at inlets
Shoaling off the mouth of Boca inlet is nothing new. The city hired a contractor to dredge the shoal at a cost of just under $2 million in 2013.
Folden said the central beach restoration project, which placed sand on the beach north of the inlet, could be adding sand to the shoal, making it shallower for boaters.
Sand from beaches north of the inlet is supposed to move through a hole in the north jetty (called the weir) so it can be collected by the city’s dredge inside the inlet, Folden said.
After hearing complaints from recreational boaters and charter captains, the city is considering options for dredging the shoal, but not until after the sea turtle nesting season ends Oct. 31.
“We are well aware of it,” city spokeswoman Chrissy Gibson said. “We are really in the process of exploring our options.”
A dredging contractor is scheduled to return to the waters north of Boca inlet in December to complete about 1.2 miles of the central beach restoration project left unfinished because of stormy weather in January. Dredging the inlet shoal could be added to the central beach project, Gibson said, but that’s only an option at this point.
“There are many factors, including scheduling, availability and procurement that have not been addressed,” she said.
Shoals come and go at ocean inlets, and most inlet managers in Palm Beach County deal with the shallows outside inlets by warning boaters that they must have “local knowledge” to use the inlets and letting nature handle the sand.
Shoals also exist at Boynton and Jupiter inlets. They tend to be shallowest during the winter months, when waves driven by strong northeast winds push sand across the face of inlets.
The larger Lake Worth Inlet, leading to the Port of Palm Beach, is maintained for ship traffic and is less prone to seasonal shoaling.
Even this summer, the shoal off the mouth of Jupiter Inlet “is as large as I’ve ever seen it,” said Mike Grella, longtime executive director of the Jupiter Inlet District.
But Grella said the district has no plans to dredge the Jupiter Inlet shoal — partly for budget reasons and partly because the shoal is a natural breakwater during hurricanes.
Similarly, Palm Beach County has no plans to dredge the shoal off Boynton Inlet, said Tracy Logue, a coastal geologist with the county.

Boaters must be vigilant
For now, boaters seem to be coping with the Boca inlet shoal.
Alex Warner, owner of the Gulfstream Boat Club, tells customers who rent his boats to steer clear of the shoal, but he was allowing them to use Boca inlet in August.
Some boaters have become accustomed to the shoal. Even when waves were breaking on the shoal around low tide on Aug. 15, one boater tilted up his outboard engine and ran across the waves and into the inlet without incident.
But hazards created by the shallow water remain, especially when boats are forced into a narrow channel of water on busy weekends at low tide.
Sean Meadows, manager of the World of Scuba dive shop in Boca Raton, stands on the seat of his 23-foot Mako when heading out Boca inlet. Meadows said he needs the additional height to see over the south jetty to determine whether any other boats are running into the inlet at the same time he’s headed out.
Capt. Nick Cardella, of Nick C Fishing Charters in Boca Raton, said large charter boats are using Boca inlet only at high tide. Cardella said he has bumped a few times on the shoal this summer on smaller center-console fishing boats.
“I genuinely think someone’s going to get hurt,” said Sean Flynn of Boca Raton, who has been running boats through the inlet for 17 years.
“This wasn’t this bad six months ago,” Flynn said. “At low tide, if you’re paying attention, you can see the bottom.”