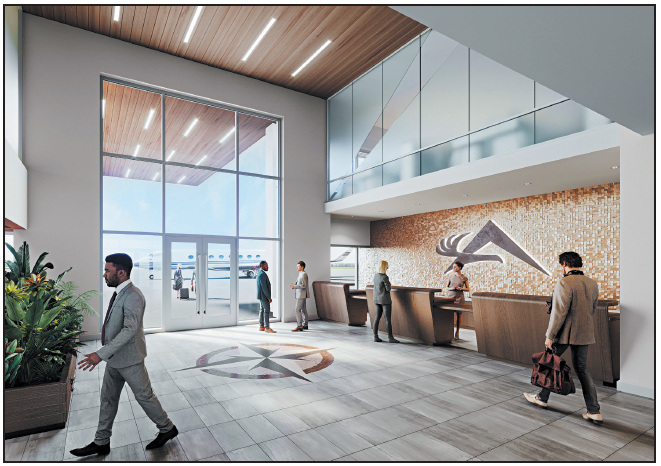 ABOVE: Inside the terminal, a portion of the second floor will be removed to create a two-story entryway. BELOW RIGHT: The new passenger waiting area. Renderings provided 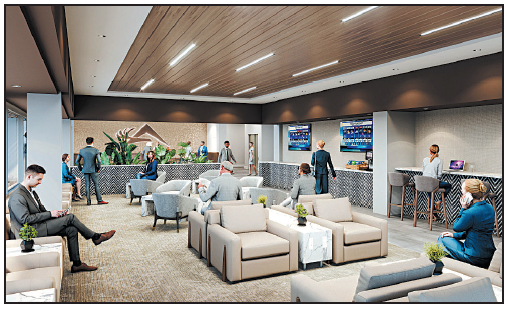 Boca Raton is a city with an ample number of cosmetic surgeons serving its residents, and now its airport has an appointment for a $40 million face-lift.
Atlantic Aviation and the Boca Raton Airport have signed a new 40-year ground lease in which Atlantic will commit $40 million over the next seven years to replace and add new hangars and make improvements to parking areas and an office building.
Atlantic, which operates in 30 states, is one of two fixed base operators at the airport that provide maintenance, fueling, hangar and tie-down space and other services.
“It’s an opportunity to modernize, revitalize,” said Clara Bennett, executive director of the Boca Raton Airport Authority. And that’s something that’s needed.
“It’s a modernization of facilities that were built over 30 years ago,” Bennett said. “The aircraft are getting bigger. Because some of these hangars were built in the ’80s and early ’90s, they were built with lower door heights … that cannot accommodate the newer fleet that have taller tails and longer wingspans.”
The Boca Raton Airport is a general aviation facility. It has no commercial flights but serves private aviation and charters and is the site of Lynn University’s flight school.
A seven-member airport authority board operates the 214-acre airfield and leases 41 acres to Atlantic. The new lease was effective June 1, replacing one set to expire in 2033.
The original lease dates back to the 1980s, and there had been 22 amendments over the years, Bennett said. Atlantic maintains structures on the leased land and subleases space to tenants such as aircraft maintenance and charter aviation companies. The company also derives income from sources such as hangar rentals and fuel sales.
Atlantic hopes to break ground by the end of this year and to complete much of the construction of hangars and the airport’s Executive Terminal and office space building within five years of the start of work.

Replacing old hangars with new ones will add about 50,000 square feet of hangar space, and a new fuel storage tank will be built. Those changes are highlighted in blue.

Five hangars will be razed and new ones built resulting in a net increase of about 50,000 square feet of hangar space, said Tony Sherbert, Atlantic’s regional director. For 30 years Atlantic will own the new hangars it builds, after which ownership transfers to the airport authority, he added.
Atlantic also will resurface about 710,000 square feet of ramp or tarmac space and add another estimated 50,000 square feet of space. It also will build a new 90,000-gallon fuel storage tank.
“I think the biggest difference for the passengers of the aircraft is going to be noticeable in the Executive Terminal building,” Bennett said. “It’s pretty dated.”
Plans include eliminating a portion of the second floor to create a two-story entryway, Sherbert said.
In addition to better hangars and a smoother tarmac, pilots “will experience better service levels as well,” Bennett added.
The future upgrades by Atlantic are in addition to millions of dollars spent in capital infrastructure improvements in recent years, Bennett noted. They include widening taxiways, replacing and expanding storm drains and drainage infrastructure and resurfacing the sole runway.
It all amounts to a dramatic expansion from when the airport was built in 1936 and Boca Raton’s population was less than 1% of what it is now.
It became a military airfield in World War II where flight crews were trained in the use of radar, a fledgling technology at the time. The land was later transferred to the state, and 1,000 acres was designated for educational use and became the site of Florida Atlantic University.
The airport has undergone significant changes in the 21st century. The control tower opened in 2000, and a U.S. Customs and Border Protection inspection facility began operating in 2018. It enables international travelers to fly directly to Boca Raton without stopping first at another airport to clear Customs.
Today, Bennett said, there are 209 aircraft based at the airport including 70 jets and 107 single-engine planes.